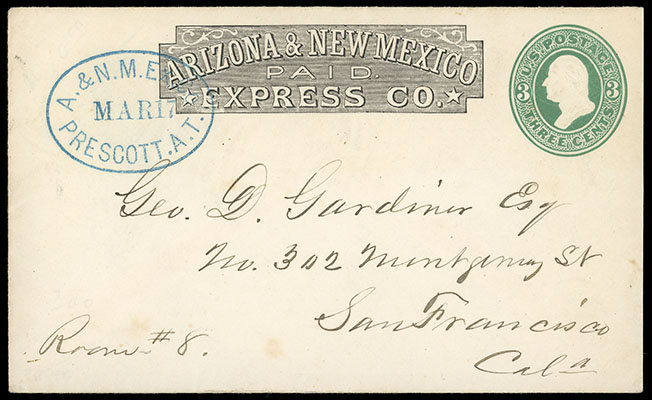 In March of 1875, several newspapers reported the establishment of a new stage and express service that operated across Arizona and New Mexico. Henry Wells was listed as President and the General Superintendent was his son, Charles H. Wells. Stock certificates were created, a company was formed and line operations began to take shape. In late December 1875 or January 1876, this stage and express service started to operate over a route between Prescott, Phoenix, Tucson and the Terminus of the Southern Pacific Railroad. Despite its name, the company never got as far as New Mexico. By 1876 the express folded due to lack of funding, having lost its usefulness as the railroad pushed further east. 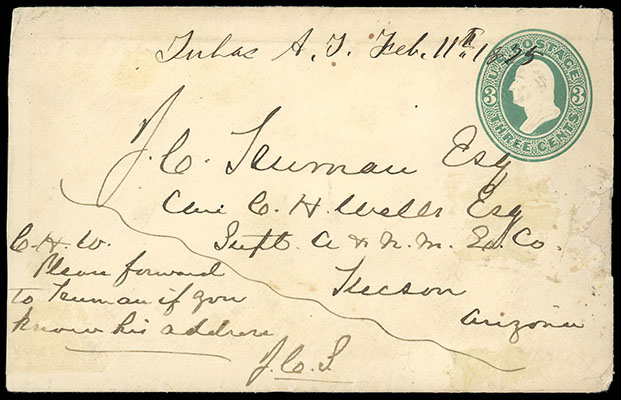 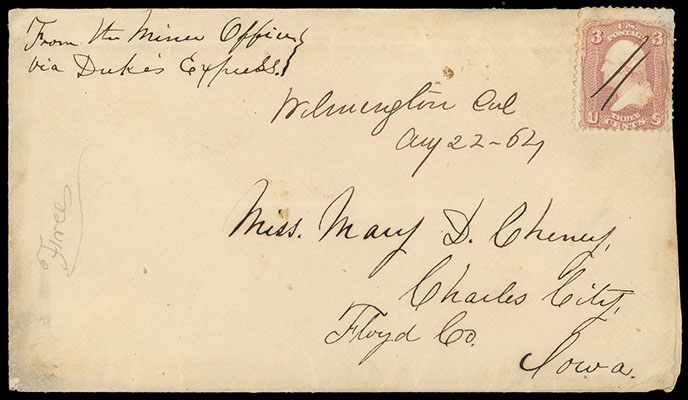 THE ONLY RECORDED COVER CARRIED BY L. DUKES & CO.'S EXPRESS.

L. Dukes was a Jewish sutler who served the Fort Mojave garrison beginning in 1863. When the steamships did not make it upriver to the fort with supplies, Duke's store was very popular among the soldiers. Expanding his entrepreneurial activities, he decided to go into the express business. He chose to take the Mojave Road northwest out of Prescott to Fort Mojave.

As advertised in the July 20, 1864 Arizona Miner, L. Dukes and Co. Express was planned to leave Prescott about the 1st and 16th and Mojave on the 10th and 25th of the month. At Fort Mojave, Dukes Express would connect with a government express assigned to carry the mail across the Mojave Desert and on to Los Angeles. The ad named Rev. H.W. Read, Postmaster as the Prescott agent for Dukes. One of the first private express companies within Arizona Territory carrying letters and other mail, L. Dukes & Co. operated from July 26, 1864 until a U.S. Mail Contract began on March 1, 1865 after which service was discontinued.

The sender of this cover was Tisdale Hand, editor of the Arizona Miner, back to his future wife Mary D. Cheney in Iowa.

Only one other example of this Fort Whipple Military Express datestamp is reported, also incompletely struck in black.

There is another Las Cruces N.M. use dated Apr. 30th 1864 (Dike Collection, Frajola sale 18, lot 443) with a descriptive letter headed "Fort Whipple, Arizona" that mentions "We have no mail facilities and … have to send out an express". 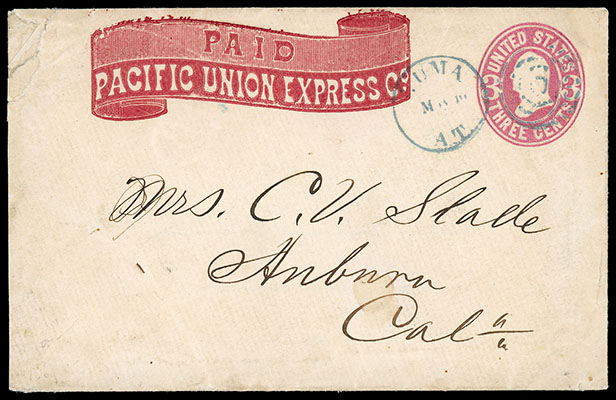 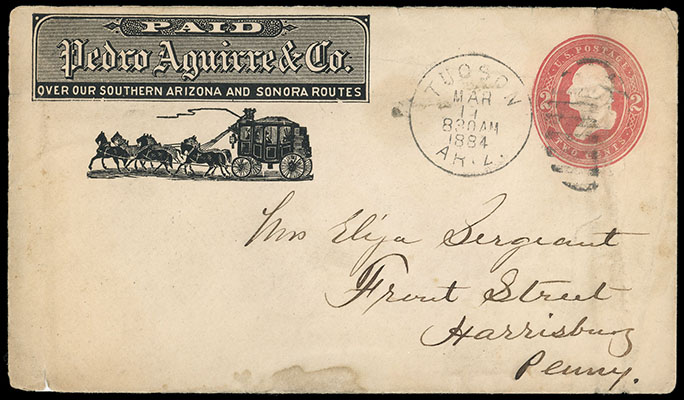 THE ONLY RECORDED USED EXAMPLE OF THIS PEDRO AGUIRRE & CO. PAID EXPRESS FRANK.

In 1873 gold was discovered south of Arivaca near the Mexican border which led to a Gold Rush in that area. This led Pedro Aguirre in 1878 to start a route of stages and mail service from Tucson to Arivaca and then south to the Oro Blanco mining camp. This continued until he sold the company in 1886 and retired. 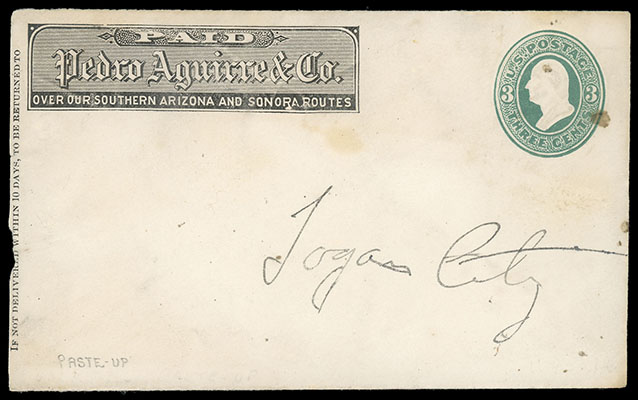 Pedro Aguirre (1835-1907) was a Mexican by birth, frontier refugee by political turmoil, and American by the Gadsden Purchase. Aguirre, in spite of Apache depredations and the death of his elder brother, ran a freighting, stagecoaching, and mail contract empire south and west of Tucson from 1878 to 1886. 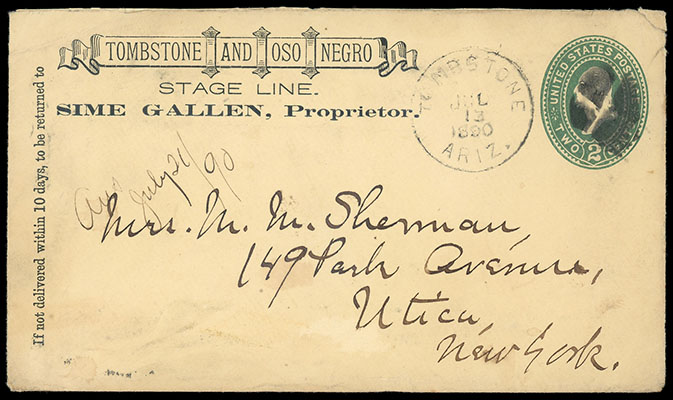 THE EARLIEST OF ONLY TWO RECORDED USED EXAMPLES OF THE TOMBSTONE AND OSO NEGRO STAGE LINE FRANK.

Sime (Samuel) Gallen was a teamster who worked at Virginia City, Nevada and Bodie, California. He came to Tombstone, Arizona Territory in 1884. Gallen established his stage line to the Oso Negro Silver Mine near Santa Rosa, Sonora, Mexico in 1890. This 120-mile stage line lasted only a few months.

This cover was carried by Gallen's Stage Line from the Oso Negro Mine to Tombstone where connecting with the mails. 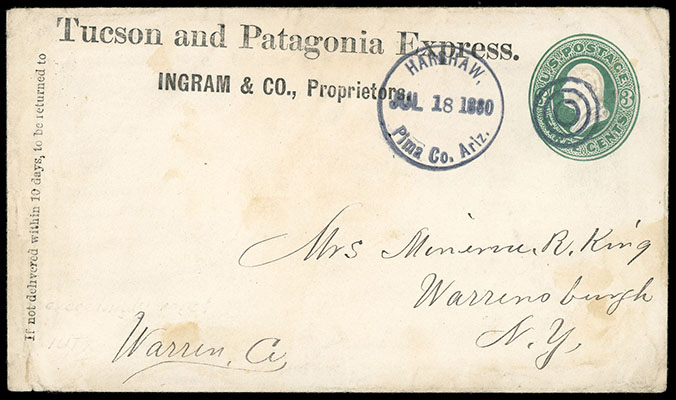 THE FINEST OF ONLY TWO RECORDED USED EXAMPLES OF THIS EXCEEDINGLY RARE TUCSON & PATAGONIA EXPRESS FRANK.

A partnership between John Delamore Kinnear and H.C. Walker had resulted in a stage company that ran between Tucson and Tombstone, Arizona Territory. This affair ended around 1881 and each partner formed his own stage line that ran over the same route. It is believed that John Kinnear formed the Tombstone & Patagonia stage line when the partnership with Walker ended that ran from Tucson, Pantano, Benson, Harshaw, Tombstone and Patagonia in Arizona Territory. He competed with John Kinnear's Arizona Mail & Stage Company. The Souther Pacific Railroad construction train reached Tucson, Pantano & Benson by late 1880. By November 1882, there was a regular railroad service between Benson, and the Gulf of Mexico (Guaymas). The railroad, with Wells Fargo, took over the express business in Arizona.