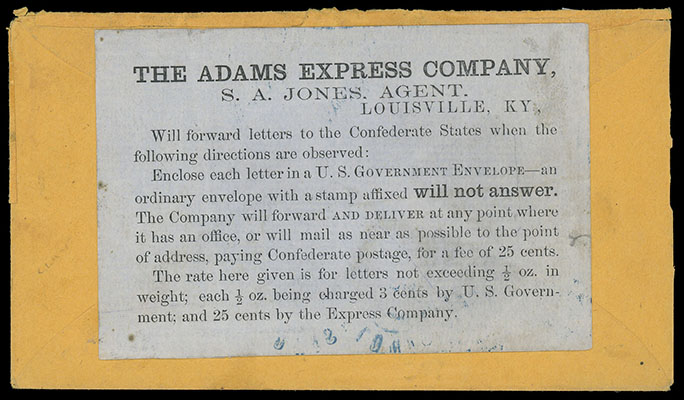 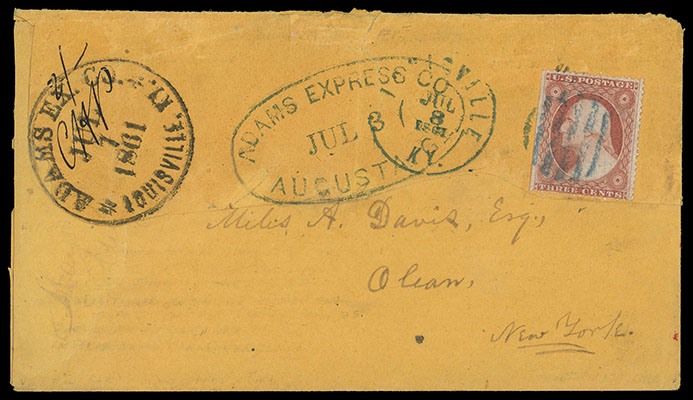 ONE OF ONLY FOUR RECORDED COVERS BEARING AN ADAM'S EXPRESS LABEL.

Adams & Co. had organized the beginnings of an express in the south before 1850 (Stimson, page 156). In May 1861, Adams Express spun off the Southern Express as a separate division. During the Civil War, Adams had the facility to deliver "Through the Lines" mail, as evidenced by the instructive label. The Adam's Express Company began carrying letters across-the-lines between their offices in Nashville and Louisville on June 22, 1861. The sender paid the CSA and USA postage plus an express fee of 25¢ for each ½ ounce. Private express mail service was terminated by U.S. Presidential proclamation on August 26, 1861.

This cover was sent inside another envelope from an unknown location in the CSA to Louisville for transmission to the north by Adam's Express. This interior envelope was carried northbound across-the-lines by Adam's Express and placed in the U.S. mail in Louisville with U.S. postage paid. The Adam's Express S. A. Jones Agent label was affixed to the reverse provides instructions and rates for sending mail to the Confederate States. 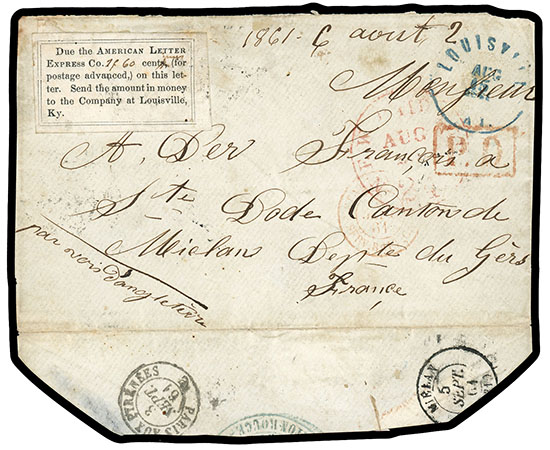 ONE OF TWO RECORDED EXAMPLES OF THE AMERICAN LETTER EXPRESS POSTAGE DUE LABEL. THIS IS THE ONLY ONE USED TO A FOREIGN DESTINATION.

The American Letter Express Company advertised its across-the-lines mail service with a basic rate of 15c. Their instructions stated: "Enclosing 15 cents in money. This prepays all expenses to its destination. The rates here given are for letters not exceeding half ounce in weight… Do not use U.S. stamps or stamped envelopes, they are valueless when coming from the Confederate States."

Evidently some letters were received without the requisite prepayment, and these were delivered to the recipient postage due. The 1 franc 60 centimes requested on this label covers the postage costs only and equates to 30 cents -- double the 15c treaty rate and reflected in the 24c credit to France in the New York exchange office datestamp. The express fee was paid by the sender.

Only two examples of the postage due label prepared by American Letter Express are recorded in the Special Routes book -- this cover front to France and one with a U.S. 3c 1857 Issue stamp to New York. They were both postmarked at Louisville on August 15. It is possible that the label was only used on one batch of mail forwarded from Nashville and was thereafter discontinued as impractical. 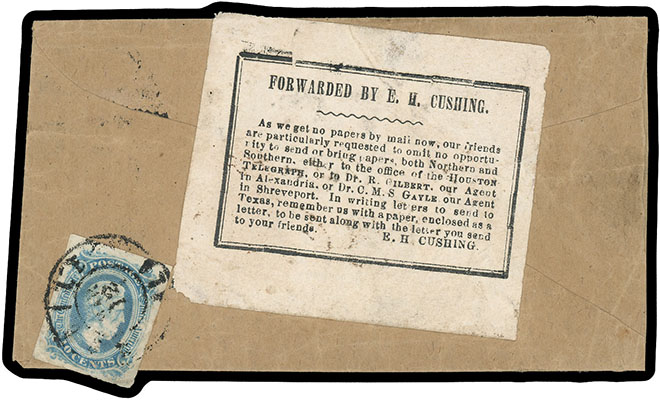 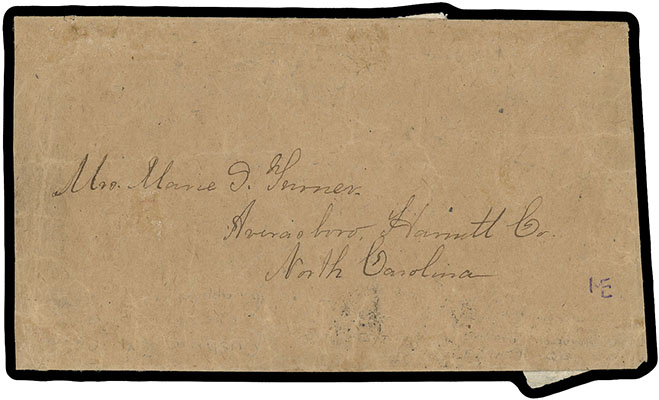 THE ONLY RECORDED EXAMPLE OF THE RARE CUSHING TRANS-MISSISSIPPI EXPRESS LABEL TIED BY A POSTAL MARKING.

E. H. Cushing, editor of the Houston Daily Telegraph newspaper, commenced his express service after New Orleans fell to the Federals in April 1862 as an effort to improve communications between Texan regiments in the East and secure safe lines for news transmission. The 500-mile express ran between Houston and Mobile, or Selma, with pony riders and other means of conveyance necessary to cross Federal lines. The labels were typeset at his newspaper and several types are recorded. They were affixed by Cushing's agents on the reverse of covers carried by the express to advertise the service.

The Type B Cushing label on white paper was used on eastbound mail in 1863 and early 1864. 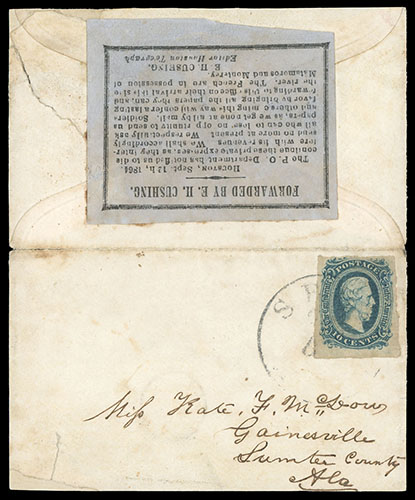 The Type D Cushing label on grayish paper was used on eastbound mail in September 1864. It was dated September 12, 1864 and announced the end of the Cushing private mail service reading "The P.O. Department has notified us to discontinue these private expresses, as they interfere with its revenues. We shall accordingly send no more at present". The Post Office had set up a Trans-Mississippi Express Mail that was in direct competition with the Cushing service.