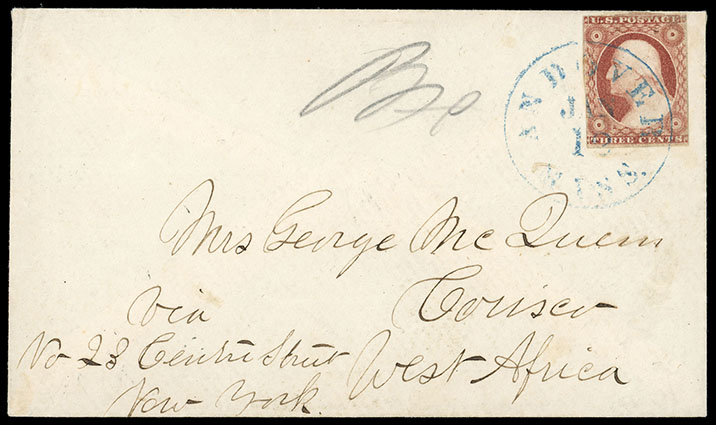 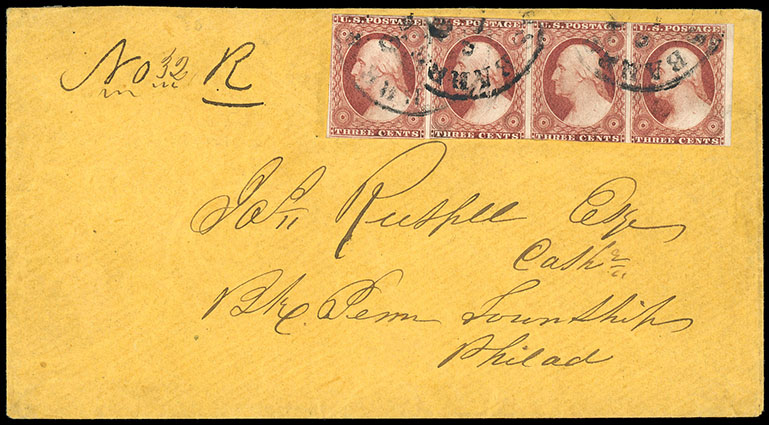 1852, 3¢ dull red, type I, horizontal strip of four, large margins to slightly in at bottom, tied by "Wilkes Barre, Pa. Sep 20" cds on orange registered cover to Philadelphia Pa. with manuscript "No. 32, R" registry marking at left, Very Fine and scarce registered use, a lovely cover showing four-times the 3¢ rate plus registry fee paid in cash; with 2008 P.F. certificate.
Scott No. 11    Estimate $300 - 400. 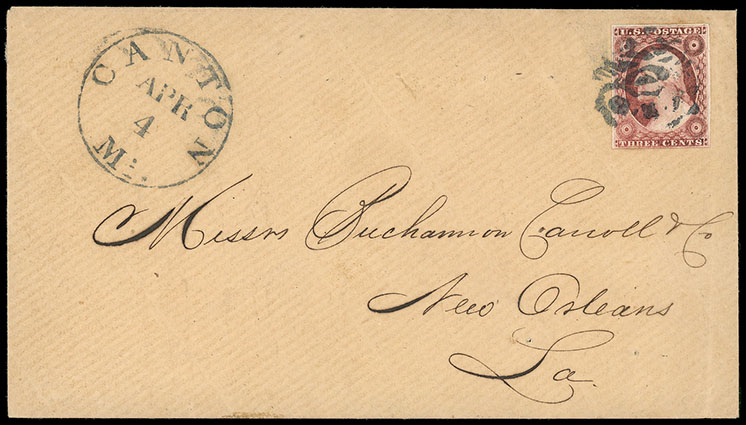 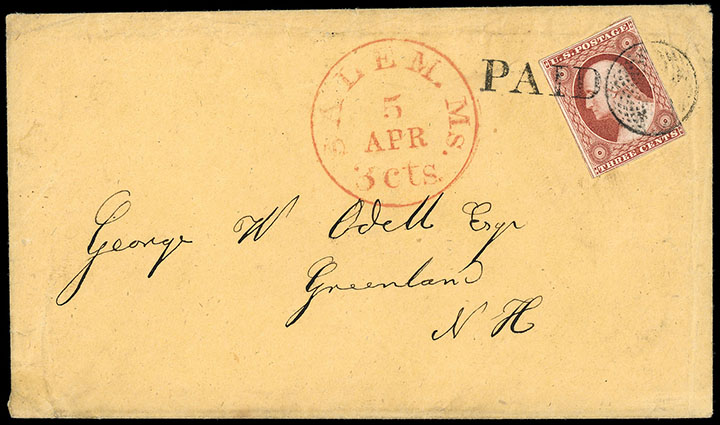 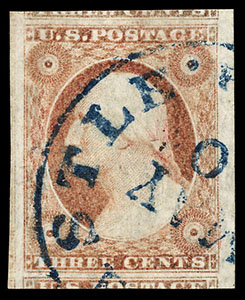 A REMARKABLE USED EXAMPLE OF THE 3¢ DULL RED TYPE I 1852 ISSUE WITH GREAT EYE APPEAL, GRADED PERFECT GEM 100 BY THE P.S.E. 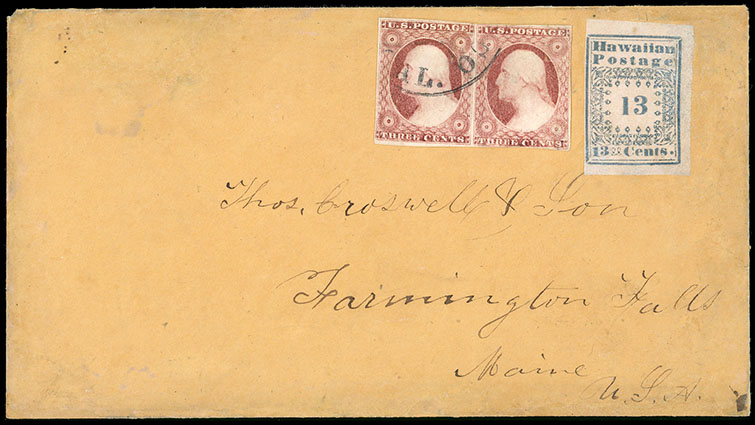 THE ONLY RECORDED MIXED FRANKING OF THE HAWAIIAN 13¢ "HAWAIIAN POSTAGE" MISSIONARY AND UNITED STATES STAMPS.

Cover #10 in the Gregory 13¢ "Hawaiian Postage" Issue (Scott 3) Cover Census of 11 covers. This is the only 13¢ "Hawaiian Postage" cover in the census used with United States stamps and one of only eight covers with complete stamps available to collectors. The earliest known use (No. 1) has most of the stamp torn away, and there are two covers (No. 2, No. 9) ensconced in the National Postal Museum.

The sender, George D. Gower, was born Aug. 31, 1826 at Farmington, Maine and later operated a lumber business in New Haven, Conn. While he lived in Lahaina during the 1850s, he regularly read Anglican services at his home on Sunday afternoon, frequented by whaler captains and others. He served as Customs Collector of Lahaina from 1851 to 1854.

The 13¢ "Hawaiian Postage" Missionary pays the correct composite rate (5¢ Hawaiian, 2¢ ship captain's fee and 6¢ U.S. transcontinental rate). During the Treaty Period, the short-lived paste-over practice at the Honolulu Post Office of affixing United States stamps (6¢ postage) over Hawaiian postage was probably done as a precaution against having United States postage charged to the recipients of letters from Hawaii. When United States postage stamps were used, no "Ship" or rate markings were applied at San Francisco to the paste-over covers, but 2¢ was charged to the account of the Honolulu post office for the ship fee paid with the Hawaii stamp. In his book, Fred Gregory records only one paste-over Missionary cover and eight with 1853 Kamehameha III Issue. 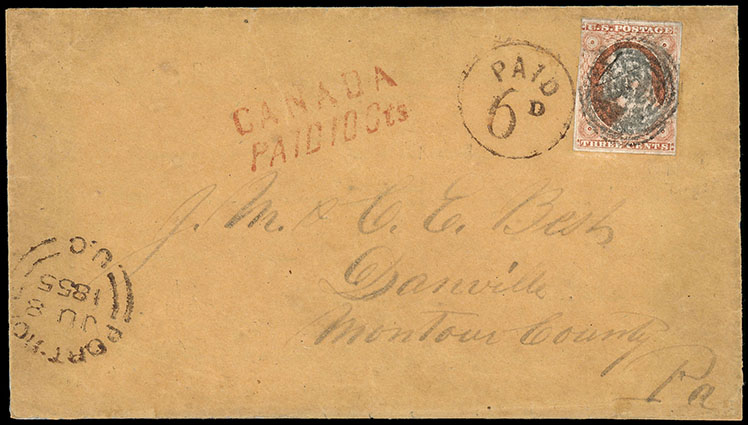 The sender affixed the U.S. 3¢ stamp in Canada to prepay U.S. postage. The Canadian post office canceled the stamp and Canadian postage of 6 pence was prepaid in cash. Dr. Chase's notes on back including "The 3c 51 is rarer than the 1847 issue used from Canada". 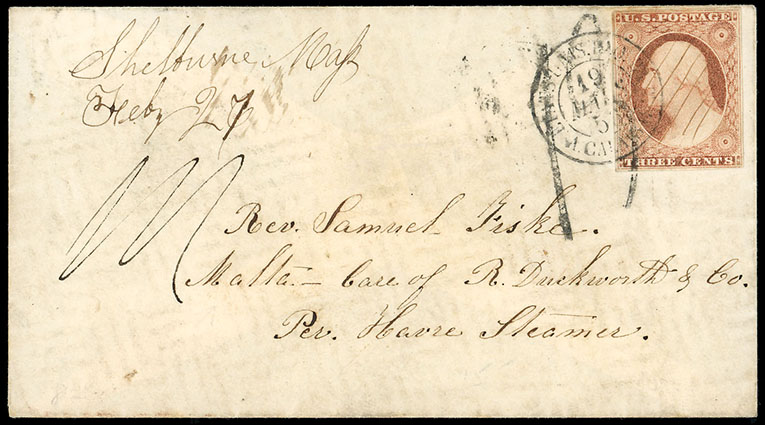 ONE OF ONLY TWO RECORDED 1851 ISSUE COVERS TO MALTA.

It was treated as completely unpaid for British Open Mail. It may have been carried privately to its final destination, as the addressee was a minister and missionaries often hand-carried letters destined for other missionaries.