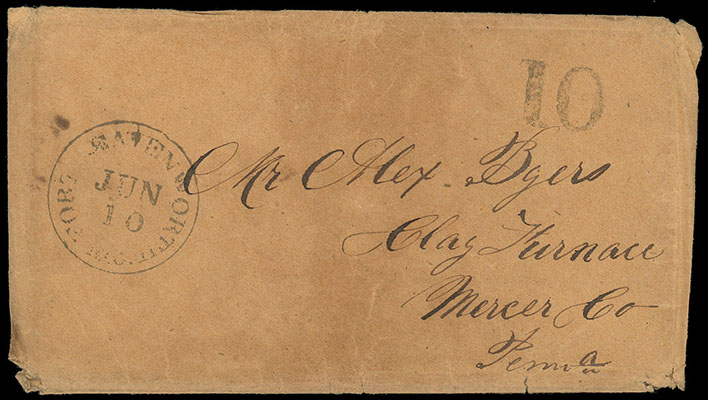 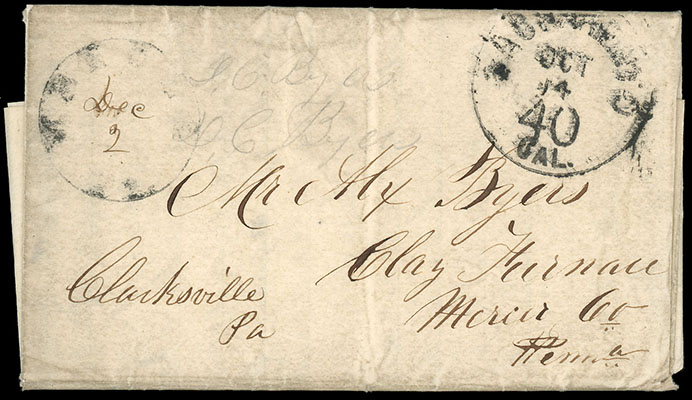 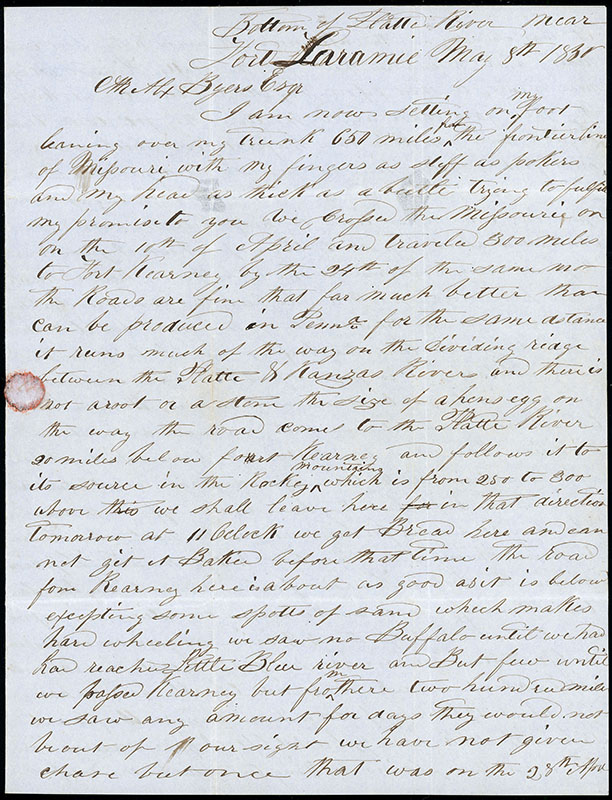 (Mail Routes) Bottom of Platte River, Near Fort Laramie, May 8th, 1850, dateline on lengthy three-page letter written on the trail to California by Thomas J. Patten, accompanied by original buff cover addressed to Clay Furnace Pa. with "Fort Leavenworth, Mo. Jun 10" cds and "10" cent rating handstamp, letter reads in part "I am now setting on my foot leaning over my trunk 650 miles from the frontier line of Missouri with my fingers as stiff as pokers and my head as thick as a beetle trying to fulfill my promise to you. We crossed the Missouri on the 10th of April and traveled 300 miles to Fort Kearney by the 24th of the same month. The roads are fine that far much better than can be produced in Pennsylvania for the same distance - it runs much of the way on the dividing ridge between the Platte and Kanzas rivers and there is not a root or a stone the size of a hen's egg on the way. The road comes to the Platte River 20 miles below Fort Kearney and follows it to its source in the Rocky mountains which is from 250 to 300 [miles] above this. We shall leave here in that direction tomorrow at 11 o'clock…We saw no Buffalo until we had reached Little Blue River and but few until we passed Kearney, but from there two hundred miles we saw any amount. For days they would not be out of our sight…Himrod and the doctor were riding ahead & discovered them on the flats. Himrod got up near enough to shoot before they started but did not kill. They then gave chase and by the time they got to the bluffs Himrod overtook them and killed one the first fire which was a great feat & excited him to no small degree. I was one mile or more behind and did not see the beginning of the sport but came up in time to help kill the second one which stood about six shots, three of which I gave him. They were very large ones, the one I helped to kill I think would have weighed 1000 lbs had he been in good order but they were very poor. We tried a little of the meat but it tasted a little too much like the beef of an old bull to be very palatable; it is fine sport but hard on horses and mine is too good to use up in that way…We have had no grass except old grass until within about a week, it is now tolerable good…I have seen no hard times on the plains, nothing to disturb me except the continual winds which chap my hands crack my lips skin my nose and blows my eyes full of sand, blows through my clothes overcoat and all, blows ashes in our victuals and them ashes sometimes made from Buffalo dung as we have had to use that article for fuel about one third of the time and it is far better for our use than green cottonwood. The country from the Missouri about two hundred [miles] is very fine with one exception, that is the lack of timber which is very scarce. There is not as much in 500 miles as there is on one acre of heavy timbered land. The country along the Platte above Fort Kearney is too poor for civilized inhabitants. The Platte is a peculiar stream, very wide and shallow, from ½ to 2 miles wide and not over a foot deep and the bottom a bed of loose sand. Where we crossed the south fork one hundred and fifty miles below this it was near ½ mile wide and in no place 1 foot deep. 100 miles below this we first saw the spires of the Rocky Mountains. Since that the country has been more picturesque and pleasant…Two days ago for the first [time] we saw the snow capped peaks at a distance of 110 miles. Laramie's Peak is in our view and as white as our hills in January. It is 60 miles distant from us now, we pass near its base. It is thought here that we will have a good quantity of snow in going through the pass of the mountains as the mail has not come through from Fort Hall since last November. We shall try it soon - we have not yet decided what route we shall take from here, but likely by Salt Lake…"; accompanied by another Oct. 14th 1850 Sacramento City Cal. letter from same correspondence with "Sacramento, Cal. '40' Oct 14" integral-rate cds, letter concerns Himrod's illness, a Very Fine trail letter.
Estimate    $1,000 - 1,500. 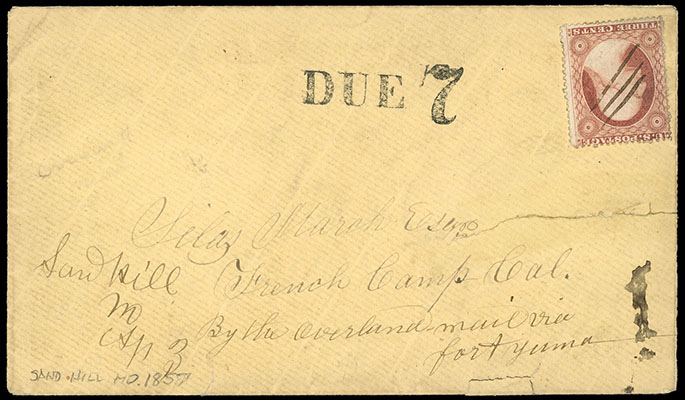 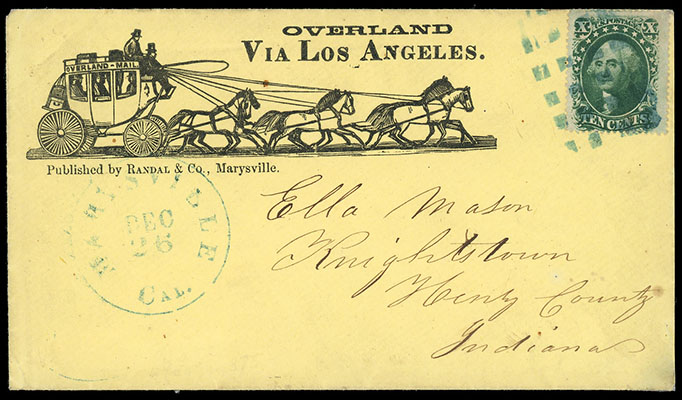 A TRULY EXCEPTIONAL OF THIS "OVERLAND VIA LOS ANGELES" ILLUSTRATED STAGECOACH DESIGN ON COVER. 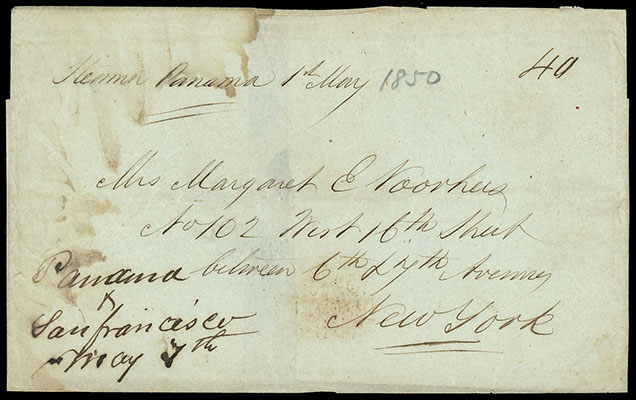 A HIGHLY SIGNIFICANT COVER IN THE HISTORY OF THE CALIFORNIA MAILS. THIS IS ONE OF TWO RECORDED EXAMPLES OF THE MANUSCRIPT "PANAMA & SAN FRANCISCO" ROUTE AGENT'S MARKING.

This cover was carried by PMSS Panama on May 1, 1850, connecting with USMSS Georgia at Charges. This was the only trip handled by route agent R. J. Laurensen, who applied the manuscript postmark in the absence of a date stamping device. 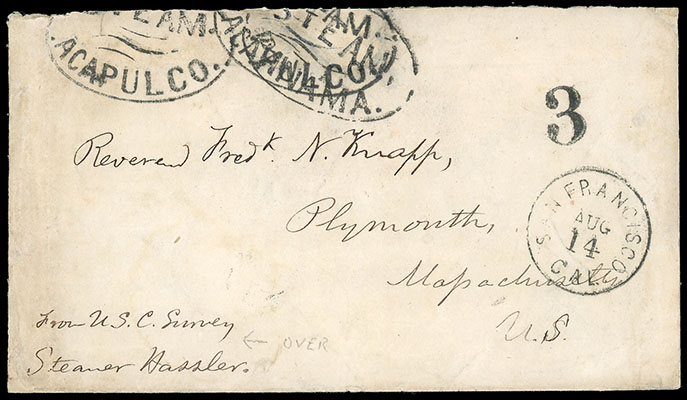 (Mail Routes) "Steam Acapulco." and "Steam Panama.", two partially off at top oval "Steam Acapulco" steamship marks over "Steam Panama" handstamp, on ca. 1870 cover to Plymouth, Mass., this proves these "Steam" handstamps were applied in San Francisco not in the consular offices, "San Francisco, Cal., Aug 14" cds (Williams SAF-810) with "3" due marking, endorsed "From U.S.C. Survey, Steamer Hassler" at lower left, a concession was given to Naval personnel to send letters due which waived the ship captain's fee of 2¢ therefore a rate of 3¢ normal postage if on a federally controlled ship, Very Fine.
Estimate    $1,000 - 1,500.

THIS DUAL HANDSTAMP USAGE IS UNIQUE BASED ON THE MEYER SURVEY.

Another view of the rating on this cover is that it was not in a Federally controlled ship (this mail was carried on Pacific Steamship Company ships) and should have carried the normal 10¢ rate. 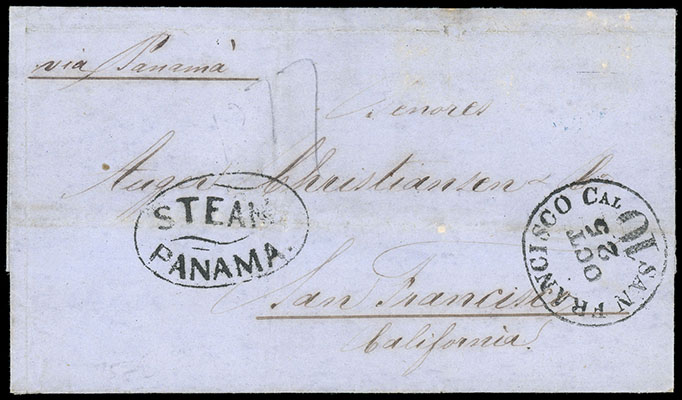 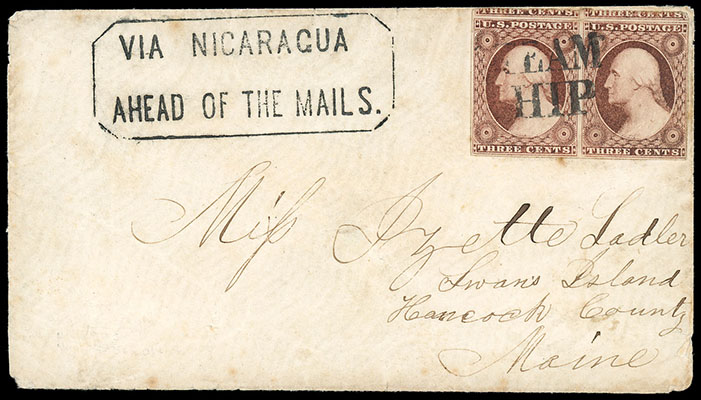 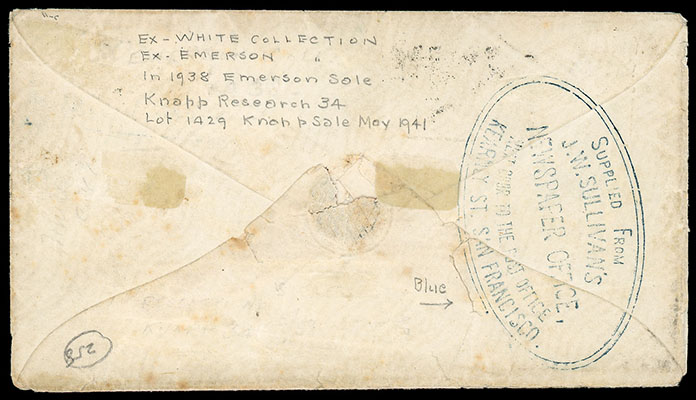 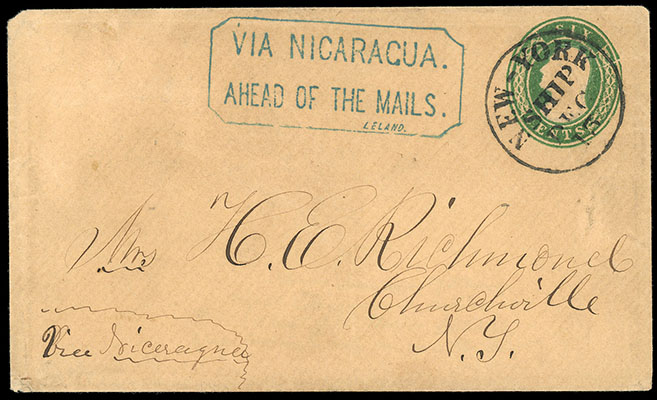 ONE OF FINEST EXAMPLE OF THE LELAND "VIA NICARAGUA" LETTERBAG OPERATOR MARKING. 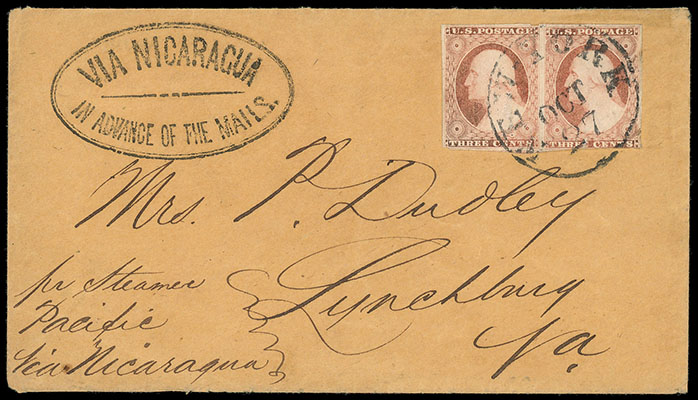 A WONDERFUL STRIKE OF ONE OF THE RAREST "VIA NICARAGUA" MARKINGS.