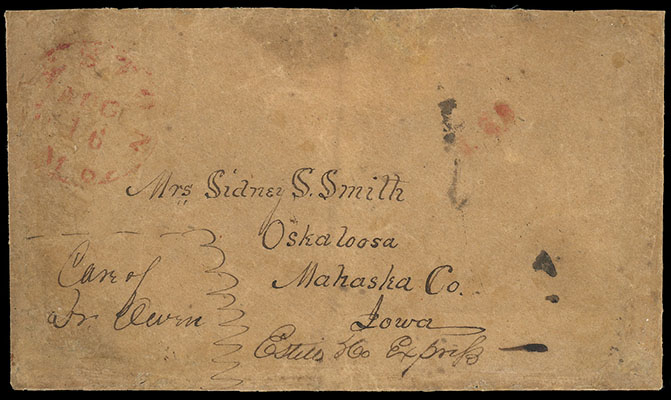 ONE OF ONLY SIX RECORDED COVERS ALL FROM THE ONE TRIP ARE KNOWN, TWO OF WHICH ARE ENSCONCED IN THE WELLS FARGO HISTORY ROOM WILTSEE COLLECTION.

Colonel James M. Estill made a single round-trip on the Oregon-to-California Trail between Weston, Missouri and Pacific Spring, in the Sweetwater River Valley of present day Wyoming. His idea was to promote a transcontinental express service in lieu of the US mail by collecting the mail along the emigrant trail for a fee of 50¢ per letter. Estill reportedly deposited 4000 letters into the US mail system at Weston, Missouri on Aug 16, 1850. Only a handful of Estill Express covers are known to survive, all sent collect 10¢. Accompanied by scanned newspaper clippings concerning the company and fees. 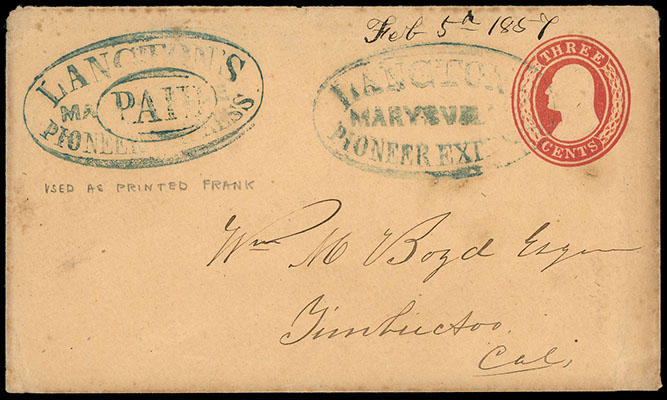 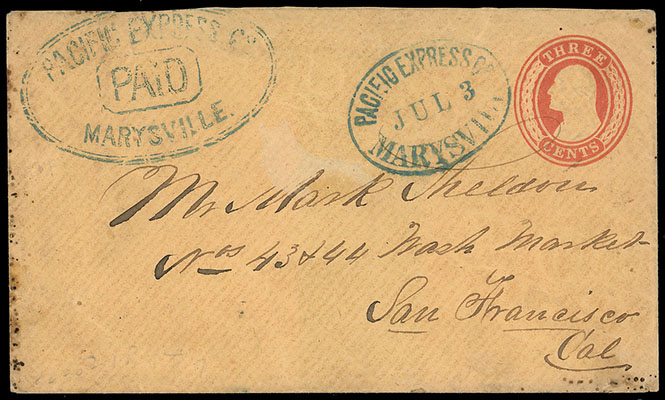 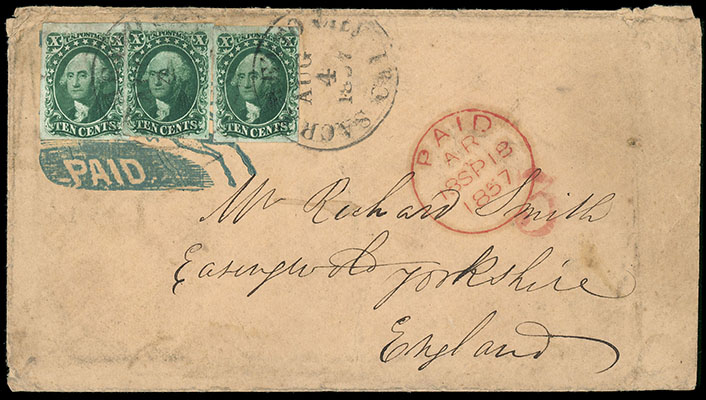 AN EXTREMELY RARE USAGE OF THE 1855 10¢ TYPE IV RECUT ISSUE ON COVER TO ENGLAND ON A PACIFIC EXPRESS CO. BLUE FRANK COVER.

This Pacific Express blue frank is very rare with only one example is listed in Thomas PAC-700 census. 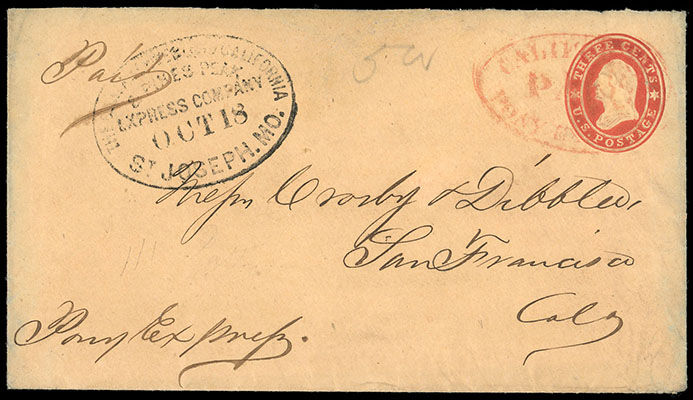 A STUNNING PONY EXPRESS COVER PAYING THE DOUBLE RATE DURING THE SECOND PERIOD FROM THE FAMOUS CROSBY-DIBBLER CORRESPONDENCE.

This is an outstanding usage with two very interesting features. Westbound Pony covers are rarer than eastbound with only twelve listed in the Frajola-Kramer-Walske census with the red New York oval "California Pony Express, Paid" handstamp. This cover demonstrates the under 3,000 miles loophole that allowed westbound mail to be sent in bundles from the East Coast to St. Joseph by mail with only 3¢ domestic postage prepaid. This loophole was closed by the Act of February 27, 1861 that eliminated the mileage provision and required 10¢ postage on any letter crossing the Rocky Mountains. 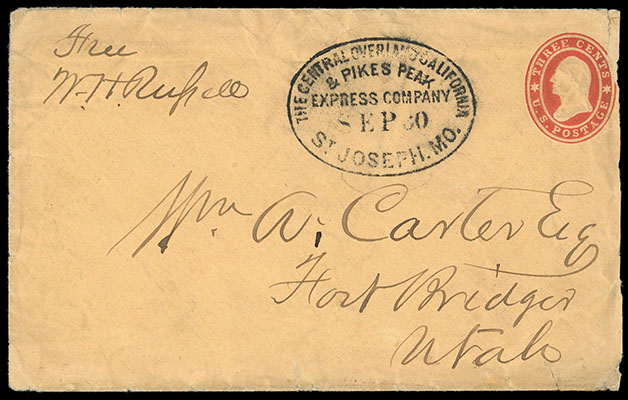 This cover was sent to William Alexander Carter (1818-1881), who was born in Virginia and came to Fort Bridger with Johnston's army in 1857 during the so-called Utah War. Since goods and people traveling west passed through Fort Bridger, Carter was at the center of economic activities on the frontier. Making the most of his situation, Carter opened a general store. He carried on a brisk trade with soldiers, scientific expeditions, miners and mountaineers, Indians, and emigrants on the Overland Trail. He also served as postmaster, Pony Express agent, probate judge and justice of the peace until 1881. He was considered one the most important individuals at Fort Bridger at the time and was known as "Mr. Fort Bridger" and to many contemporaries Fort Bridger was "Carter's Fort". 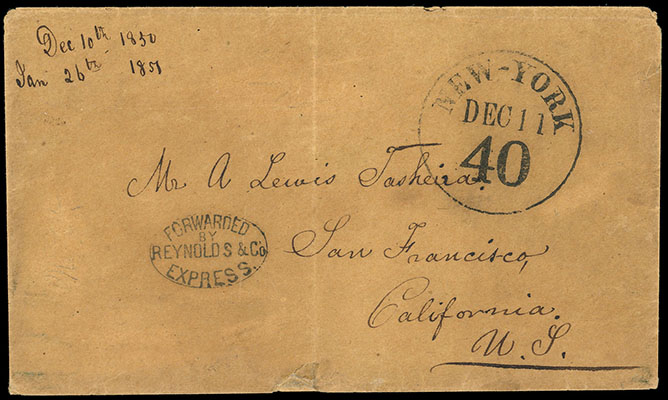 This early express was started by Angevine Reynolds in January 1850. It ran from Sacramento and Stockton to the camps of the Southern Mines.

ONE OF ONLY TWO RECORDED 28 DÉCIMES RATES VIA PANAMA TO CALIFORNIA WITH EXPRESS COMPANY HANDLING.

Letter endorsed for British route to Panama, a 2 Franc 80 centime rate for eight months only, and paid in cash (manuscript on reverse). Empire City Line steamer Constitution carried letter from Panama City to San Francisco. French prepayment was to Panama only leaving 20¢ postage due for American contract steamer transit to San Francisco. Letter carried from San Francisco to the northern gold fields by Reynolds & Co. Express for an additional charge of $1.00. 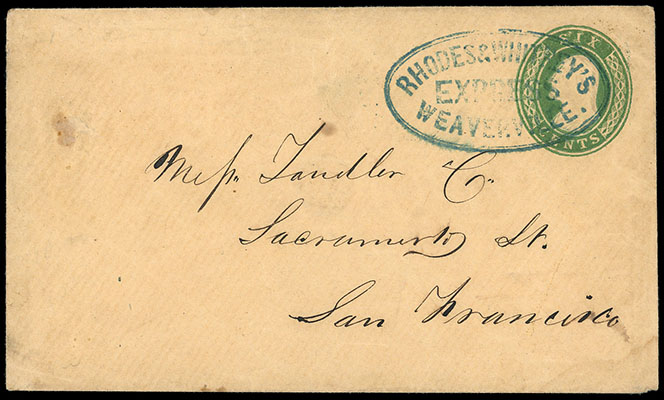 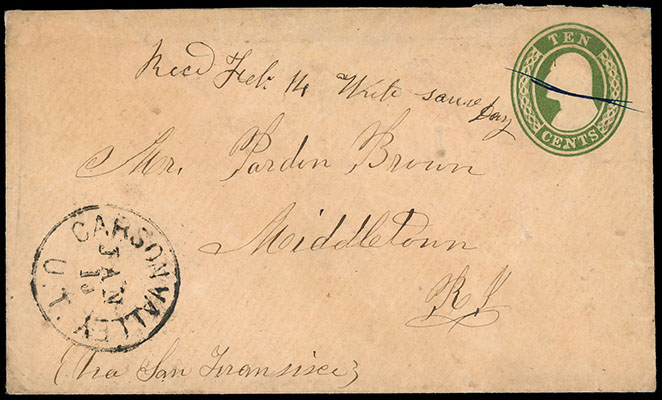