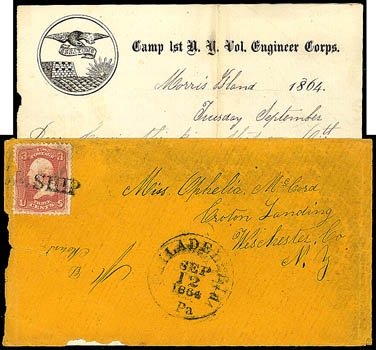 Confederacy, Morris Island Letter. Hand written letter on patriotic lettersheet "Camp 1st N.Y. Vol. Engineer Corps." with Eagle in circle at left, datelined "Morris Island, September 6th, 1864", We have some hopping to do down here, hopping to get out of the way of the Shells. We are shelling Sumter all the while. …, Iwas with Jonny when he broke his neck in two places. I sat up with him till he died. He lived two days, he was well liked in the Company…, included is turned cover franked with 1861 3¢ rose (small defect) tied by straight line "Ship" handstamp to New York with "Philadelphia" cds, inside usage addressed to sender in Hilton Head, S.C., but unfranked & no postmarks, some cover damage on reverse, F.-V.F.
Estimate    $100 - 150. 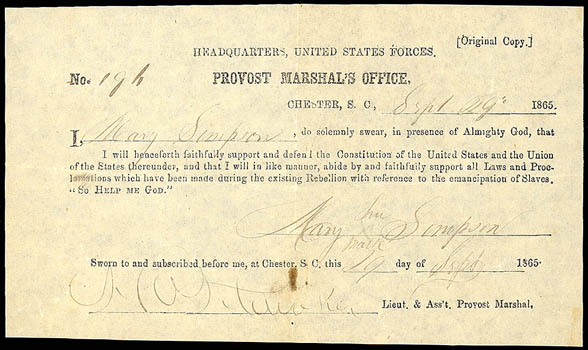 Confederacy, Oath of Allegiance. Printed form headed "Headquarters, United States Forces/Provost Marshal's Office, Chester, S.C." and filled in "Sept 09, 1865"; Mary Simpson swears to "henceforth faithfully support and defend the Constitution of the United States … made during the existing Rebellion with reference to the emancipation of Slaves. So Help Me God." Sworn to and signed by the Lieut. & Ass't Provost Marshal, slight translucent stain toward bottom, Very Fine, a rare piece of Americana.
Estimate    $200 - 300. 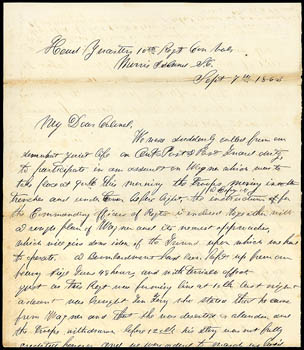 Confederacy, Report of the Capture of Battery Wagner. Autograph Letter Signed, "E.S. Greely", Colonel of the 10th Conn. Infantry, 2p. folio, datelined "Head Quarters 10th Regt. Conn. Vols, Morris Island, S.C., Sept. 7, 1863", addressed 'Dear Colonel' it reads in part: " … We were suddenly called from our somewhat quiet life … to participate in an assault on Wagner which was to take place at 9 o'clk this morning the troops moving into the trenches under cover before light… a bombardment had been kept up from our heavy siege guns 48 hours, and with terrible effect. Just as this Regt was forming line at 10 o'clk last night a deserter was brought Gen Terry who stated that he came from Wagner and that she was deserted the troops withdrawn we were ordered to march … advanced as far as the Beacon House where we halted until a reconnaissance was made. Soon it was announced that Wagner was evacuated we were put in motion and advanced past Wagner on the marsh and advanced on Greg in Column by Company which is about 3/4 of a mile distant, upon reaching their works we ascertained they too had been evacuated. Maj. Sanford who had gone up the creek between Wagner and Greg to prevent reinforcements coming to the aid of Wagner succeeded in capturing about 70 prisoners. We found some ten or 12 near this point (Greg). Our Brigade after takes possession of the forts was ordered to return to their camps. Garrison force was immediately put into both those places. We were under a sever fir from Johnson and the Batteries on Sullivan's Island. But one man in the 10th was hit…. We shall take possession of Sumpter soon … ", letter with couple usual folds, Very Fine.
Estimate    $400 - 600. 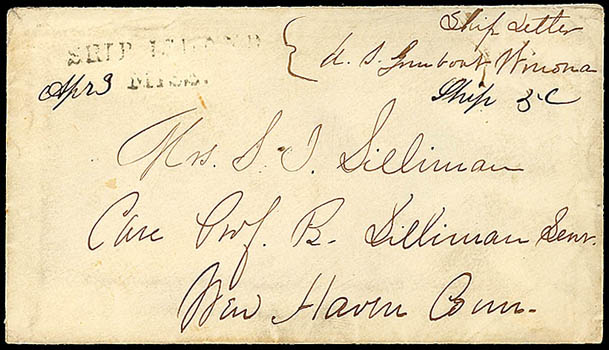 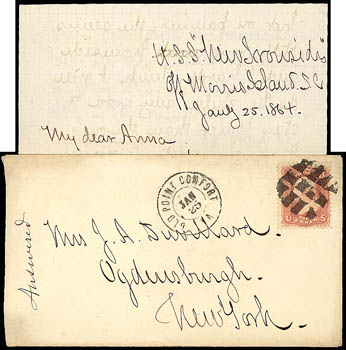 Confederacy, U.S.S. New Ironsides Letter. Datelined "U.S.S. New Ironsides, off Morris Island, S.C. July 25, 1864" to his sister in New York, "Our Captain Rowan has just been promoted to Commodore, but his appointment dates back to July 1863 so that he is only a few numbers from Admiral. I hope that he maybe one before he leaves this ship. If any man in the service deserves promotion he does. We have had a story going around for a few days that this ship is to go home before two months from now for repairs which she very much needs (the ship had been hit by a torpedo) but the news is also getting to good to be true. I hardly think it possible for us to leave until Charleston is taken, but the sooner the work commences the better. We shall all like it. We are only waiting for some new iron clads, which the Admiral has been expecting down here for the last 3 months. We are really getting desperate and don't care much what may happen.", included is matching cover franked with 1861 3¢ rose tied by "Old Point Comfort, Va." double circle postmark, Very Fine& a nice historical letter.
Estimate    $200 - 300.

Written from one of the most powerful Warships of her era armored with 4" of iron plate over 12" oak planking. The ship operated in support of the blockade of Charleston, S.C. and took part in several attacks on the Confederate fortifications defending that city. Her broadside battery of 8 heavy guns on each side made her a uniquely valuable ship for bombardment purposes. She took more hits from enemy guns than any other federal ship, but did not lose a single man to them. Her endurance was unmatched. She maintained uninterrupted blockade duty for 16 months during the siege of Charleston, S.C. The Confederates offered a $100,000-reward for her sinking. The ship was commanded by Commodore Stephen Clegg Rowan who later became an admiral in the US Navy. 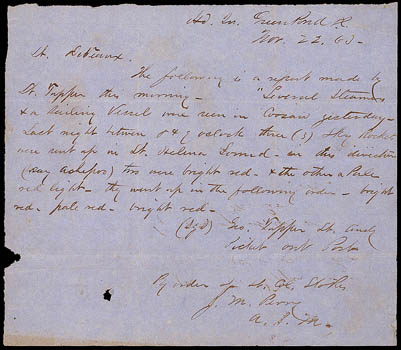 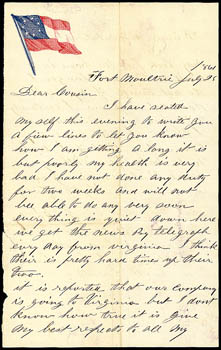 Confederacy, 7 Star Flag Patriotic Lettersheet. Datelined "Fort Moultrie, July 23, 1861" with interesting contents: I have seated myself this evening to write you a few lines to let you know how I am getting a long it is but poorly my health is very bad. I have not done any duty for two weeks and will not be able to do any soon. Everything is quiet down here, we get the news by telegraph everyday from Virginia. I think there is pretty hard times up their too.

It is reported that our company is going to Virginia, but I don't know how true it is. Give my best respects to all my friends and relations. You may look for me home in a week or two, not longer. I do not think if my health does not improve I certainly will be home once more I think I will come by Covington but if I do I will not stop Nothing more but remain yours., Very Fine and attractive.
Estimate    $300 - 400. 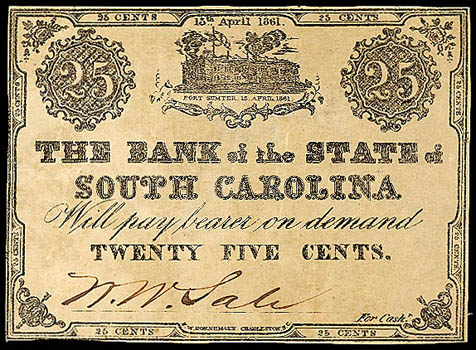 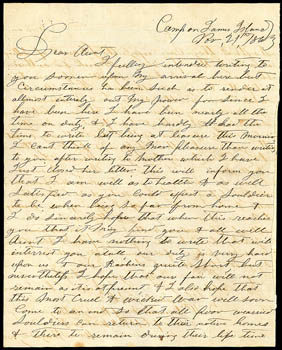 Confederacy, Camp on James Island. Soldier's letter written to his Aunt & datelined Camp on James Island, Nov. 21st, 1863, nice letter with interesting contents, …our duty is very hard upon us & our rations quite short…, while I am on the river I can see the Yankees very place indeed & can distinctly see every shot that is fired on Sumter, which they continue to shell her both day & night. The Yankees have three different fleets on the Bay, besides heavy Batterys on Morris Island…, he ends with My address is "Charleston, S.C., 4th Regiment Va. of Heavy Artillery, Care of Capt. H.H. Hurt, Co. F, Wises Brigade", Very Fine.
Estimate    $200 - 300. 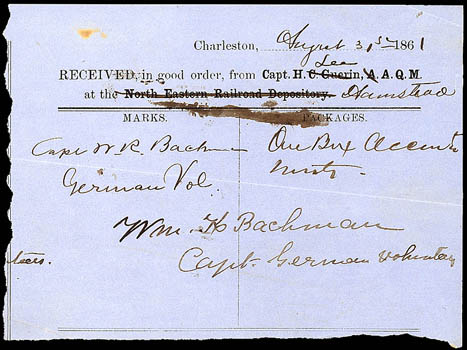 Before the close of the Civil War, this battery commander would lead his South Carolina Company as the hard fought Hampton's Legions left their mark on such battlegrounds as the Seven Days Battles, Second Manassas, South Mountain, Sharpsburg, Fredericksburg and at Gettysburg where as part of Hood's Division 1st Corps, Capt. Bachman's battery fought gallantly firing toward Meade's Union center in support of Pickett and Pettigrew. In the fall of 1863 Bachman's Co. of 'German Light Artillery' returned to South Carolina. Here Capt. Bachman and his brave mounted artillerists would fight out the war participating in the Carolina Campaigns with Wright's Div. Dept. of S.C., Ga. & Fla. Surely they would look back longingly to the early war days when the battery could claim possession of an abundance of such stores as were so dutifully recorded in these early war documents.