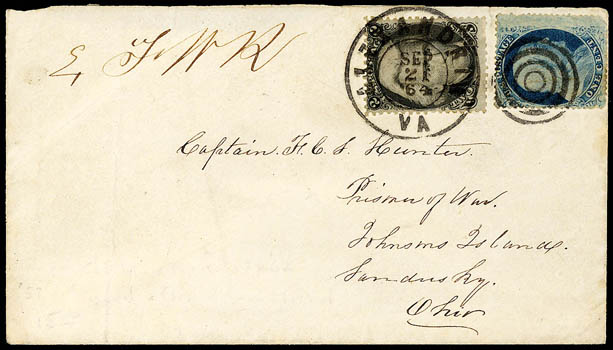 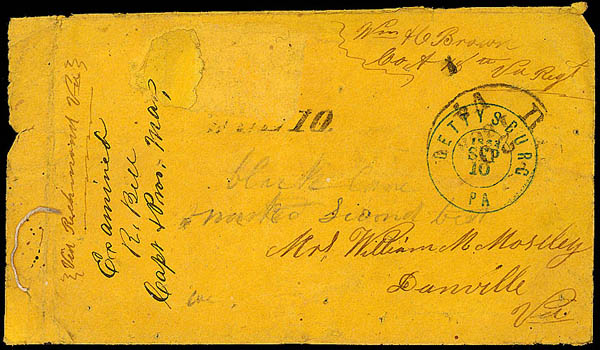 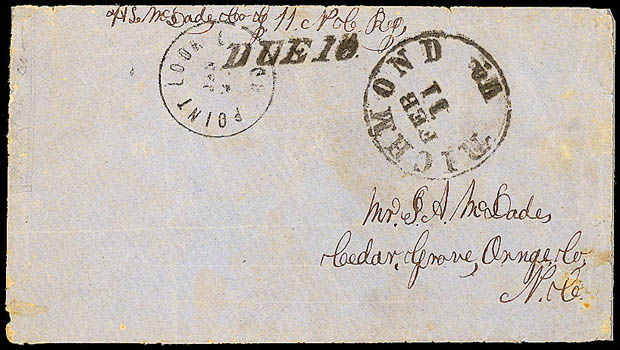 Sgt. McDade was transferred to Point Lookout prison at the end of 1863 where he remained until exchanged on February 15, 1865. 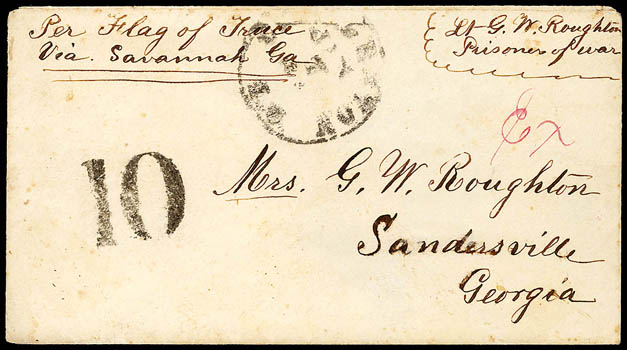 George Washington Roughton enlisted in Light Artillery, Brigade 2 Army, on March 10, 1862, during War between the States. He was wounded, Aug. 29, 1863. He recovered and returned to battle. He was promoted to become Lt. Roughton, and later as Captain Roughton.

He was injured at the Battle of the Wilderness, near Fredericksburg, Virginia, May 6, 1864, and became one of the Immortal 600. They were prisoners of war at Fort Delaware. These 600 men were sent south to be used as human shields. They were put in a stockade in front of the Union batteries at the siege of Charleston. The Union said Confederates held prisoners as human shields first, so they did the same. Later they were taken to a Union Army base at Hilton Head, SC. On October 21, after 45 days under fire, the weakened survivors were removed to For Pulaski, GA. On a "retaliation ration" of 10 ounces of moldy cornmeal and soured onion pickles, thirteen men died at Fort Pulaski, and five at Hilton Head. The remaining members of the Immortal Six Hundred were returned to Fort Delaware on March 12, 1865. Capt. Roughton was released from Ft. Delaware, June 16, 1865. He returned to the family farm west of Sandersville, where he lived until his death at age 60, in 1895. 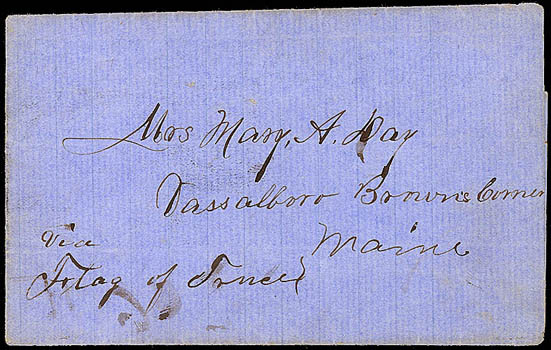 Confederacy, C.S. Mill Prison, Charlestown S.C. "Aug 10" dateline on prisoner letter addressed to Brown's Corner, Maine, sent under separate cover and endorsed "via Flag of Truce", interesting relocation content…send me a box about the same as you sent me at Libby Prison…please direct you letters to Charleston, S.C. Mill Prison, Very Fine, a rare prisoner letter likely sent during the 1864 yellow fever outbreak in Charleston.
Estimate    $300 - 400.

Rare and wonderful example of Southern Prisoner of War Cover of which only 8 are recorded from Charleston City Jail. 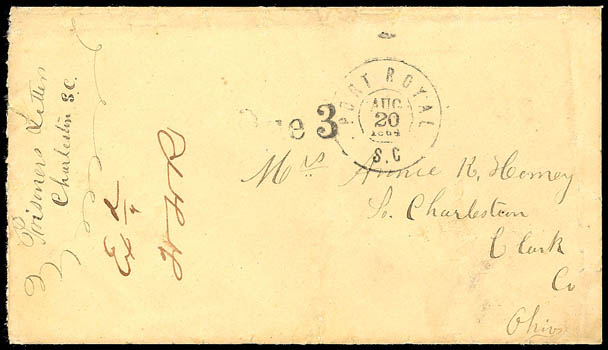 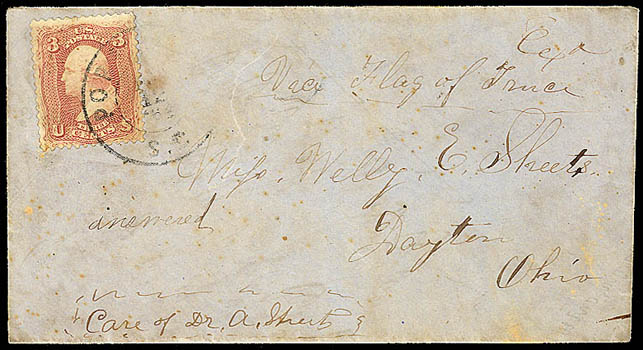 Confederacy, Confederate P-O-W Cover From Union Prisoner. Most likely in Charleston S.C. area prison although more research should be done to determine exactly which one, adversity cover made of Charleston Rail-Road Depot form which is franked with United States 1861 3¢ rose tied by "Port Royal, S.C." 1864 double circle postmark addressed to "Miss Welley E. Sheets, Dayton, Ohio/Care of Dr. A. Sheets" with manuscript "Exd" and "Via Flag of Truce", Very Fine.
Estimate    $300 - 400.

Soldier search shows Private/Corpl John W. Sheets, 19 years old upon enlistment on August 26, 1862 when mustered into Company "A" of Ohio 90th Infantry. He was wounded and taken prisoner at Chickamauga on 9-19-1863. 1983 Brian Green analysis to Jerry Palazolo included. A very nice and scarce use of a prisoner of war - adversity usage.

Confederacy, Roper Hospital, Charleston, South Carolina. adversity cover made from Bank of South Carolina check in blue from Charleston, South Carolina to the Army of the Potomac, endorsed at the top left "Via Flag of Truce, J.S. Hammell, Lt. Col., Prisoner of War, Charleston, S.C.", the cover entered U.S. postal system at Port Royal, South Carolina with their double circle postmark dated Sep. 1 (1864) with matching "Due 3" handstamp, sent via local flag-of-truce with Confederate manuscript "Ex" examined marking at bottom left, original enclosure datelined "CS M Prison Charleston S. C. Aug12th 1864" which mentions capture at Petersburg and being moved to Macon ("the principle rendezvous for poor Yanks who were so unfortunate as to be gobbled up") and of awaiting whisky by the Commissioners of Exchange ("it is the only hope which saves us from sinking into utter dependency"), cover with left flap missing, Very Fine, a wonderful & rare usage; with 2001 C.S.A. certificate.
Estimate    $1,000 - 1,500.