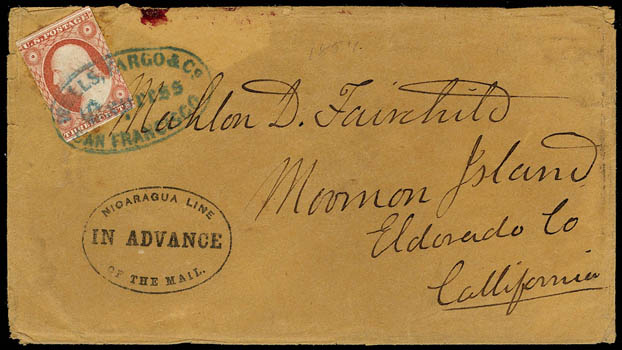 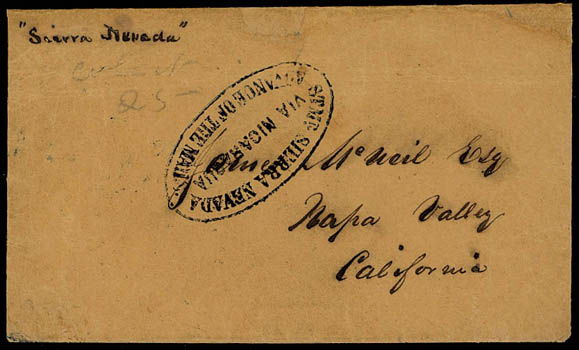 Stmr Sierra Nevada/Via Nicaragua/Advance Of The Mails. Black oval handstamp on cover to Napa Valley, California, "Sierra Nevada" sender's endorsement so evidently sent from Nicaragua without postage and brought to San Francisco by the Nicaragua Steamship Company, with pencil "collect 25" that may be an express company marking for delivery to Napa, cover skillfully repaired at top with top backflap replaced, also closed tear at top just touching the handstamp, Very Fine appearance, a rare via Nicaragua incoming usage.
Estimate    $300 - 400.

The "S.S. Sierra Nevada" was built in New York in 1851, operated by the Howard & Son's Empire Line for three trips between New York and Panama in 1852, and then sold to Cornelius Vanderbilt's Independent Line and brought to San Francisco 1852-1853 while Vanderbilt was on vacation in Europe, which was also when Vanderbilt lost stock control of his Nicaragua shipping business to Cornelius Garrison. The "Sierra Nevada" was operated by Garrison's Nicaragua Steamship Company between Nicaragua and San Francisco 1853-1857. Vanderbilt regained partial control of his Nicaragua shipping business in 1856. 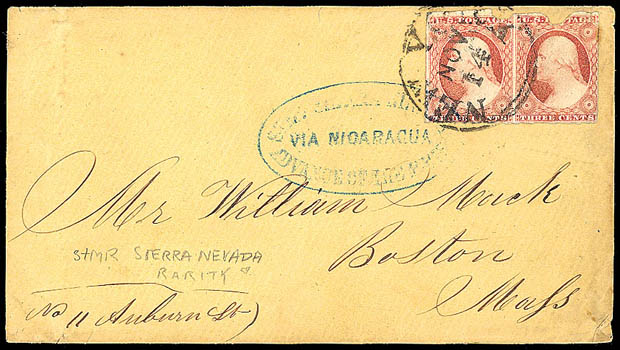 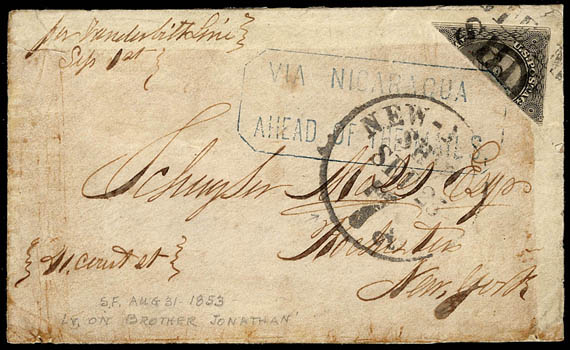 The San Francisco Post Office experienced a shortage of 3¢ stamps beginning in July of 1853 and, so, began using bisected 12¢ stamps on letters subject to the 6¢ transcontinental rate where postage was to be prepaid, which included all letters to be carried outside of the mails from San Francisco via Panama or Nicaragua to New York on non-contract ships. Most of the 1853 bisect uses were recognized. This cover is an example of one that was not. The matter was settled by the Post Office Department in a circular dated November 10, 1853, which concluded that bisects were not permitted. 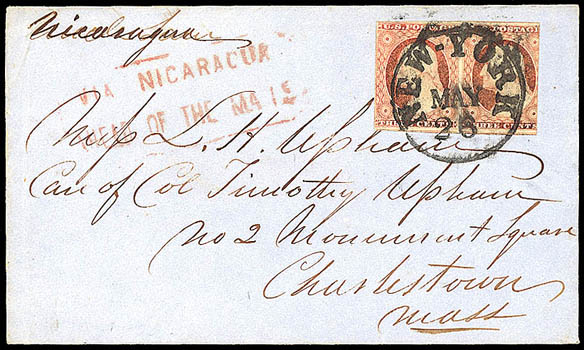 Via Nicaragua/Ahead of the Mails. Red boxed handstamp on blue cover to Massachusetts franked with horiz. pair 1851 3¢ dull red tied in transit by bold "New York" cds, Very Fine, carried from the SS Sierra Nevada which departed San Francisco on 6/1/1854 and then by the SS Northern Light which arrived in New York on 5/25/54.
Estimate    $500 - 750. 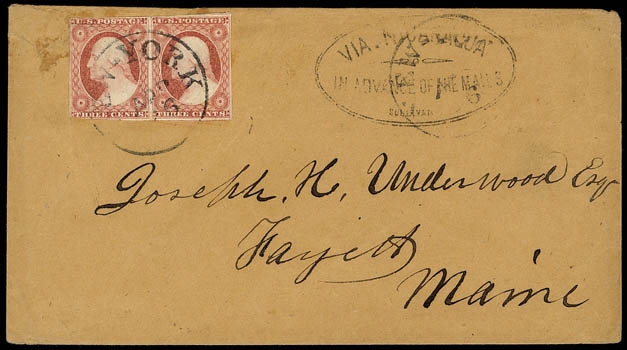 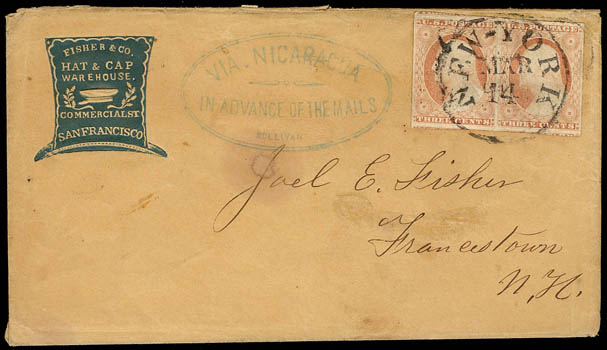 Via Nicaragua/In Advance Of The Mails/Sullivan. Blue-green double-lined oval handstamp on cover with "Fisher & Co. Hat & Cap Warehouse" embossed blue cameo corner card in the shape of a Top Hat with a Cap on the inside, addressed to Francestown, New Hampshire & franked with 1851 3¢ dull red pair (four large margins, trivial corner wrinkle) tied by "New-York, Mar 14" cds where it entered the mails, flap torn, Very Fine, a stunning usage, Cover illustrated in color in Coburn's Letters of Gold (page 234).
Estimate    $500 - 750. 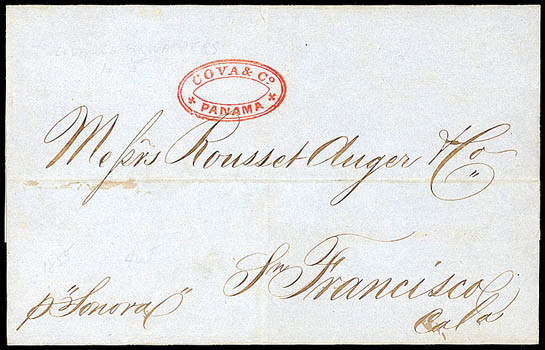 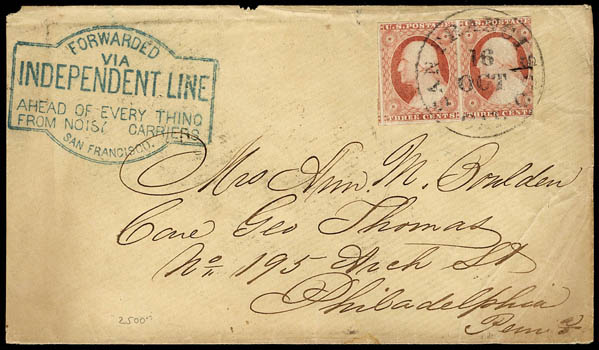 Cornelius Vanderbilt pioneered the Nicaragua Route as an alternative to the Panama Route with his Independent Line starting in 1851. That company became the Nicaragua Steamship Company in 1853 when Vanderbilt lost stock control of it while vacationing on his yacht in Europe. Vanderbilt then began his Independent Opposition Line on the Panama Route later in 1853. His ships were the "S.S. Uncle Sam" and the "S.S. Yankee Blade" on the Pacific side and the "S.S. North Star", which was his yacht converted into a steamer, on the Atlantic side. He sold the ships on his Independent Opposition Line after the Panama Railroad was completed across the Isthmus in 1855. 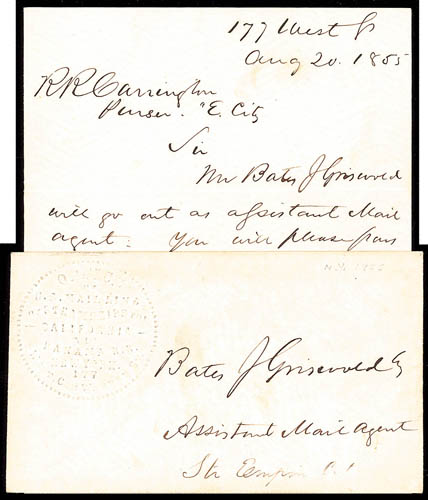 (New York) Mail Agent Pass on the United States Mail Steamship Company's "S.S. Empire City". In the form of an envelope and letter, envelope with embossed corner card for the "Office Of U.S. Mail Line Of Steamships For - California - Via Panama R.R. / New York / 177 West, Cor[ner] Warren St." and directed to "Bates J. Griswold E[sq], Assistant Mail Agent, Str Empire City", with August 20, 1855, letter written to the Purser on the Empire City stating that "Mr. Bates J. Griswold will go out as assistant mail agent. You will please pass him free to Aspinwall and permit him to occupy the Mail Agent Room….", Very Fine.
Estimate    $300 - 400.

The S.S. Empire City (1700 tons) was owned variously by Howard & Son's Empire Line; the Pacific Mail Steamship Company (PMSC), which held the mail contract on the Pacific portion of the Panama Route; and the United States Mail Steamship Company (USMSC), which held the mail contract on the Atlantic portion of the Panama Route. Howard & Son's were early competitors to the USMSC on the Atlantic side of Panama. The PMSC acquired the Empire City from Howard & Son's and became competitors on the Atlantic side after the Law's Line affair in 1850. That event led the Post Office Department to require that mail agents accompany the mails on all contract sailings by the PMSC and the USMSC. The USMSC acquired the Empire City from the PMSC after the two subsidized steamship companies agreed to confine their seafaring activities to the sides of the Isthmus corresponding to their mail contracts.