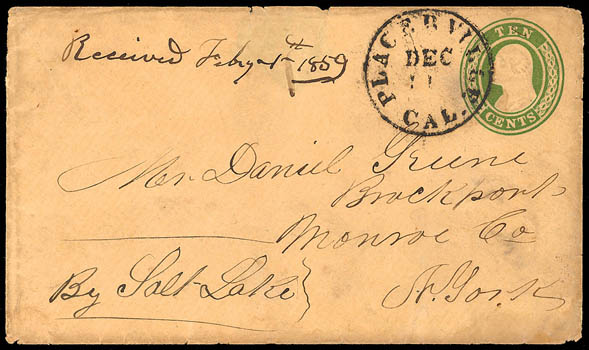 (Mail Routes) Chorpenning Contract Route and Woodson Contract Route. 1853-55 10¢ Nesbitt entire postmarked with "Placerville, Cal./Dec. 11" (1859) cds to New York with manuscript endorsement "By Salt Lake", entire with lengthy original enclosure which talks of the newly constructed Salt Lake Stage Road (Chorpenning Route), "We have a good wagon road over the dreaded Sierra Mountains to Carson Valley - constructed this season & is 85 miles long over which the mail from the States passes in a 4 horse coach or wagon weekly.", "I may send this by the Salt Lake Route so that it may pass over the same road that I did in coming out here…", plus much more regarding the City of Placerville & life in California, part of flap torn away, Very Fine and attractive, a wonderful & historic item.
Estimate    $400 - 600. 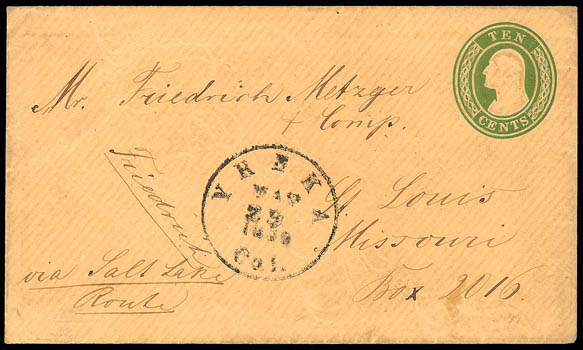 Carried on the Chorpenning Route to Salt Lake City and on the Woodson Route to Independence, Mo. 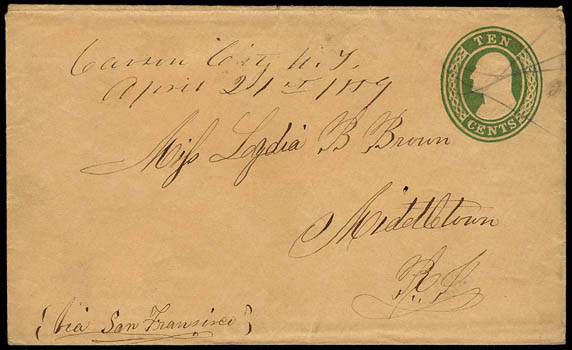 Carried on the Chorpenning Route from Carson City via San Francisco to Rhode Island. Carried over the Sierras by Snowshoe Thompson for Chorpenning (see Across The Sierra Nevada Mountain by Snow-Shoe, by Risvold and Frajola in Chronicle #215). 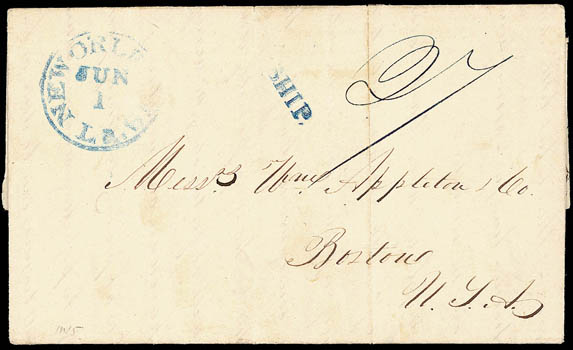 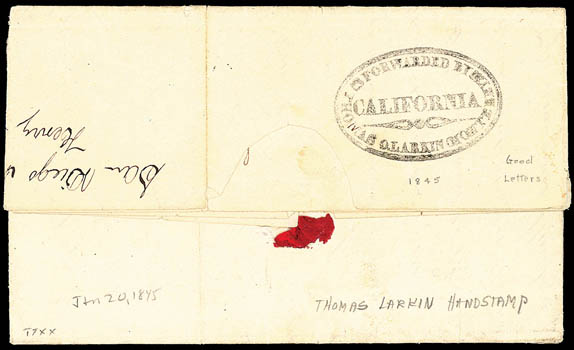 AN EXTREMELY RARE EXAMPLE OF THE HANDSTAMPED MARKING APPLIED BY THOMAS O. LARKIN, THE FIRST AND ONLY UNITED STATES CONSUL TO ALTA CALIFORNIA.

Thomas O. Larkin arrived in California in 1832 and became the U.S. Consul to Alta California (then part of Mexico) at Monterey in 1843. He served as a mail forwarder, and his scarce oval marking is found on covers sent via Monterey and carried across Mexico and deposited in the United States mails at New Orleans. 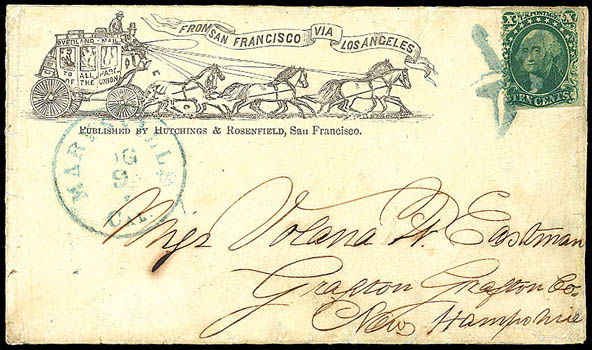 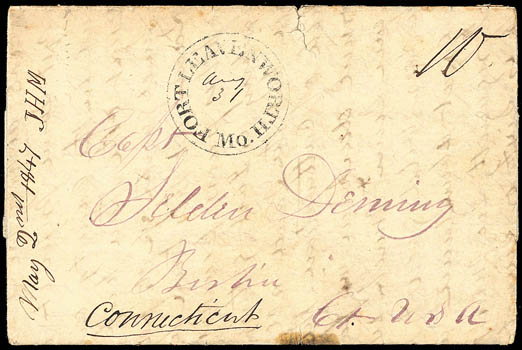 This cover was carried by General Kearny's Expedition on his return trip to Fort Leavenworth after his victory in California to end the Mexican War.

At the outbreak of the Mexican War, Kearny was ordered to seize New Mexico and California. Using diplomacy to persuade Mexican troops to withdraw, he marched unopposed to Santa Fe, where in 1846 he proclaimed a civil government for the province. Heading to California, he was informed that the conquest had already been completed by Robert F. Stockton and John C. Frémont. He arrived to discover that Mexican rebels had retaken most of the province. He then joined forces with Stockton to defeat the rebels in 1847.

Kearny, as ranking Army officer, claimed command of the area at the end of hostilities, which began an unfortunate rivalry with Stockton. When Mexican forces in California capitulated on January 13, they did not do so to Stockton or Kearny, but to Stockton's aide, Lt. Col. John C. Frémont. Stockton seized on this and appointed Frémont military governor of the area. Kearny appealed to Washington. Receiving confirmation of his authority, Kearny took command. He had Frémont relieved, arrested, and later convicted at a court-martial, though Frémont quickly received a presidential pardon.

General Kearny broke up his camp near Sutter's fort on or about June 15, 1847 and set out for the United States with Colonel Frémont, who was treated, however, with deliberate disrespect throughout the journey. The party reached Fort Leavenworth about Aug. 22. 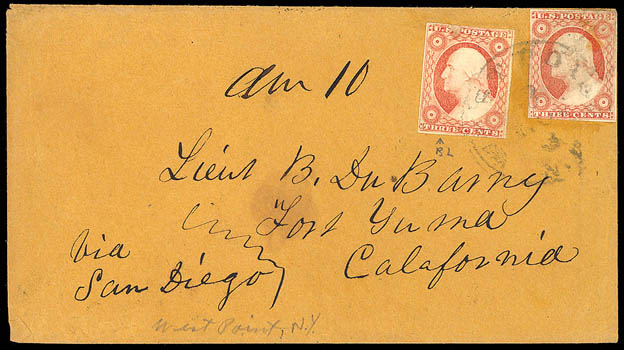 This cover was carried via New York City, Chagres, and Panama to San Francisco on the regular steamship route. From San Francisco it was carried by the California Steam Navigation Company to San Diego and then over the mule-mail route to Fort Yuma.

In less than thirty days, Birch, the capable veteran stage man, dispatched the first mail west from San Antonio. Mules, rather than horses, were to pull the coaches and for this reason and the fact that pack mules actually carried the mail over the final 180 mile stretch from Ft. Yuma to San Diego, Birch's new venture was more commonly known as the "Jackass Mail Line". The departure dates were set for the 9th and 24th of each month.

The most difficult part of the trip had been the last 180 miles from Ft. Yuma across what is now the rich Imperial Valley north to circle the Laguna Mountains by way of Cooke's Wagon Road up rugged Vallecito Canyon to Warner's Ranch, then southward over what is now U.S. Highway 385 to San Diego.

There were 87 stations listed on the itinerary, but only three, San Antonio, El Paso, San Diego, could really be called stations. Many so called stations were merely a brush corral and an adobe hut and others were just camping places. The line employed 65 men, 50 coaches (some were ambulances), and 400 mules. Only 50 trips were made before it was downsized in December 1858. 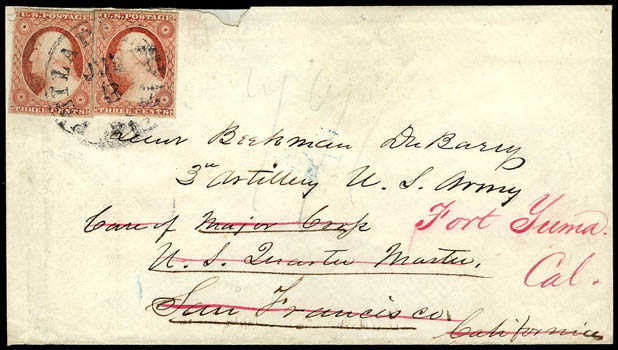 This one of only two recorded covers carried to Fort Yuma by the Colorado Steam Navigation Company on the military supply water route from San Francisco down the coast, around Baja California and up the Gulf of California, and finally up the Colorado River to Fort Yuma.

This cover is dateable to 1854 given the 6¢ transcontinental rate and the fact that First Lieutenant Beekman Du Barry served at Fort Yuma from 1854 until 1856. Besides commanding Light Battery E of the Third Regiment of Artillery, Lieutenant Du Barry was also Commissary and assistant Quartermaster. As such, he designed a number of the buildings that were constructed at the post. 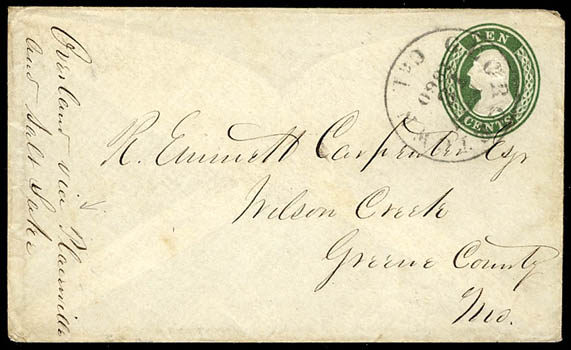 This cover was carried on the stages of the Central Overland California & Pike's Peak Express Company (COC&PPE) during the brief period that the COC&PPE held both of the mail contracts on the Central Overland Route. The Hockaday contract between Saint Joseph and Salt Lake City was acquired by Jones & Russell, the COC&PPE's predecessor company, in 1859. The Chorpenning contract between Placerville and Salt Lake City was transferred to the COC&PPE on May 11, 1860. The separate contracts were eliminated after the Southern Overland Route was shut down due to the onset of the Civil War and the mail contract held by Overland Mail Company on the southern route was transferred to the central route effective July 1, 1861. 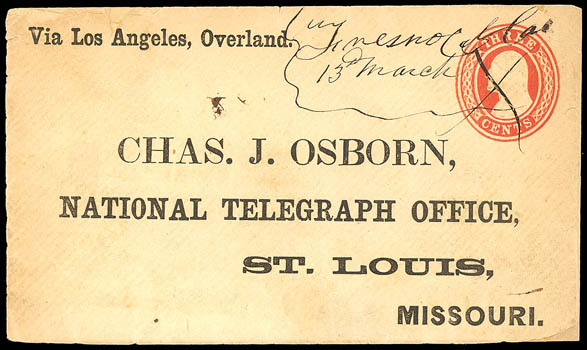 In September 1858 the Overland Mail Company started regular semi-weekly stagecoach service along the so-called "Butterfield Route" between San Francisco and St. Louis via Los Angeles. A variety of markings, printed and handstamped, were used on mail to designate this route.