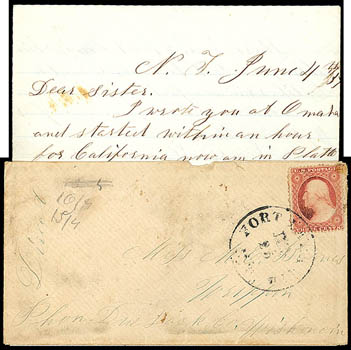 (Trail Letter) Fort Laramie, N.T. Cds tying 1857 3¢ dull red, type I on 1857 cover to Wisconsin with original enclosure datelined "N.T. June 4, 1857", letters includes, I wrote to you at Omaha and started within an hour for California, now an in Platte River Valley, about 145 miles from Omaha. This valley is very large and wide and thinly settled. We have traveled over sixty miles without seeing a sight of human being, not even an Indian, with the exceptions of one mail station and the road we are now beginning to get into the buffalo country, besides there are elk, antelope and deer, I have heard…There is a great emigration this year, both to Oregon and to California, across the plains. the letter goes on to mention some towns along the trail, cover with small nick & tear at top, F.-V.F.
Estimate    $200 - 300. 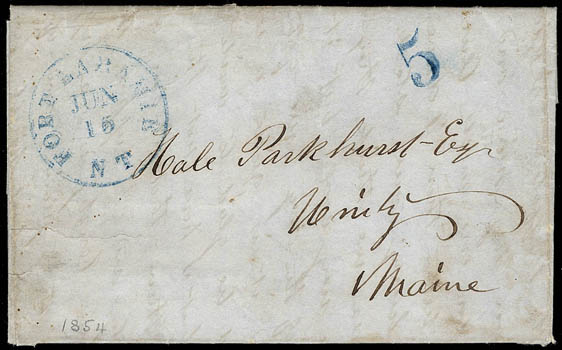 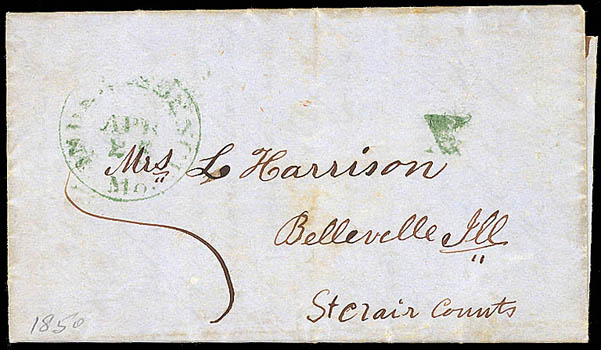 (Trail Letter) Independence, Mo./Apr. 25. Green cds with matching "X" rate handstamp on 1850 folded cover to Illinois, letter talks of Temperance Lecture, Boat trip from St. Louis, Passengers drunk and fighting (one man lost three teeth), gamblers onboard, Cholera, asks that future letters be written to Sacramento City, also included are three folded covers from the same correspondence all with Sacramento City, Cal. postmarks, the 1st is with red cds & matching "40" rate datelined "Volcano Diggins, Apr. 20, '51", 2nd is 1851 letter with "10" rate, datelined "Placer County, Senator Bar, American River, Cal./Oct. 26, 1851", letter mentions being in the diggings and wanting to make "a little more ore", going to Hangtown (Placerville), mining, "he went in north Canon in the same old place that we worked last fall and he took out $1450 under that old log, so this is luck in the gold mines.", 3rd is 1852 folded cover with "10" rate, datelined "Sac. City/Nov. 28th, 1852", letter talks of weather, fire, The city is built up again after a fashion, tents and shantys of all kinds with some large fireproof brick houses, Very Fine, a nice group of covers.
Estimate    $500 - 750. 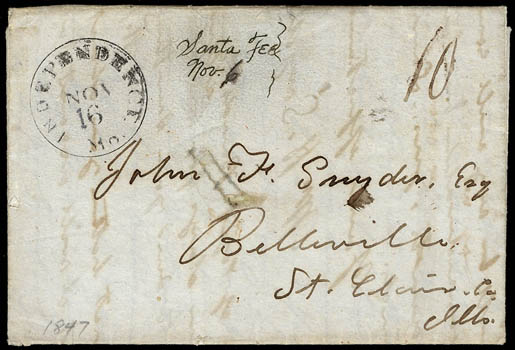 Letter speaks of excursions against the Indians and Mexicans including "A great deal of talk has been made about a threatened insurrection and Indians but the whole affair dwindled down to about thirty or forty lodges of Arapahos, which the Lt. Col. got up an expedition against. The expedition turned out to be rather an unfortunate affair, for after much labor they succeeded in bringing in five Indians and through some mismanagement let them go again." and, referring to the Chihuahua Trail, "We intend before long starting for the south in an expedition against Chihuahua & Durango… we daily receive news that the Mexicans… have for some time been anticipating an invasion from this quarter and are preparing to give us a warm reception.". 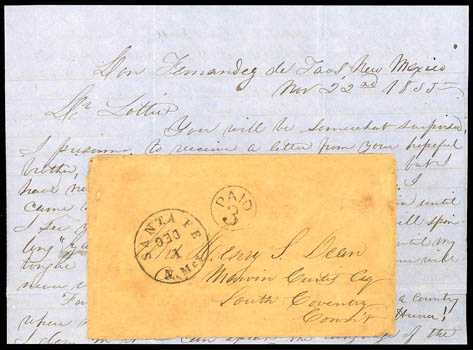 For the first time in my life I am in a country where my mother tongue is not spoken. I can speak the language of the "Greasers" with fluency.

My eyes behold every day some novel spectacle. How can I describe to you these mudwalled villages filled with dirt, jackasses, dogs, fleas, lice and Mexicans? That is but one half the picture - outside, which I rejoice to say is the worse side. According to the free and easy manner of these hospitable people, I have the entree to all these long, low, mudwalled houses, invariably built so as to enclose a square, which I take the liberty to dignify by the name of Courtyard.

Kicking dogs and belaboring donkeys out of my path, I passed the courtyard, enter the low door (stooping and turning my shoulders sideways), and, oh pleasant change! Am in a light cheery room whose neatly white washed walls are adorned with mirrors, crucifixes and most execrable pictures of the saints. I'm not invited to take a chair for the very good reason that there is none, but the fair Signora who is reclining dreamily on yon luxurious bank of gaily colored "Serapes", takes from her pretty mouth the fragrant "cigarrito" and puts it between my lips, points me to the opposite lounge and then as I enjoy the soothing fumes of the "weed" and chat with her about last night's "fandango". Her fair hands are busy making the delicious "tortillas", the dish of eggs and a cup of "Atole" (by the Yankees vulgarly called pudd'n-n-milk) which are to appease my keen appetite and teach me to prize, oh how dearly the sacred rights of Hospitality.

How pretty is my Senorita! The dark "rebosa" half covers her jetty shiny locks, and floats in peaceful folds over her well turned shoulders - her arms are bare and her short dress does not conceal the petite foot, the pride of the Mexican damsel.

The ground is covered with snow and far away to the north I can see the white summits of the Sangre de Cristo rise cold and gloomy between me and my camp in the sunny valley of the Arkansas. To stay, Kit Carson told me, I need not expect to find the snow less than ten feet deep in the passes of those mountains. 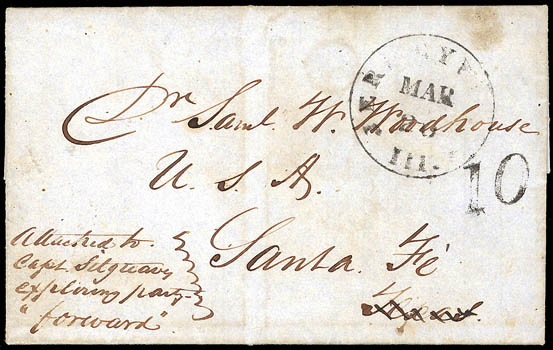 (Trail Letter) Sitgreaves Expedition. 1851 Folded cover postmarked "Jerseyville, Ill./Mar. 26" cds & matching "10" rate handstamp to "Dr. Saml. W. Woodhouse, U.S.A., Santa Fe, Texas", with "Texas" crossed out, manuscript endorsement "Attached to Capt. Sitgreaves exploring party - 'forward'" at bottom left, part of letter reads, I hope you have a pleasant company and all goes as pleasantly as possible. I really had forgotten the time a letter from here would take to reach El Paso or Santa Fe, to one of which I must direct this and not to San Antonio as first intended., Very Fine.
Estimate    $750 - 1,000.

After the conquest of New Mexico and California it was apparent that transportation and communications needed to be improved between these new territories and the rest of the United States east of the Mississippi. Geographical knowledge of most of this area, particularly northwestern New Mexico (now northern Arizona), was very limited and inaccurate. Some maps of the day showed a river system that might provide a possible navigable water corridor between New Mexico and the Gulf of California via the Zuni, Little Colorado, and Colorado Rivers.

In 1851 the expedition of Captain Lorenzo Sitgreaves set out to explore and map the southern portion of the Four Corners region of the Southwest. Sitgreaves, along with a small crew of topographers, naturalists, artists, and support personnel, and an escort of 30 infantrymen left the Zuni Pueblo in western New Mexico by pack train with instructions to explore and map the Zuni and Colorado Rivers and evaluate their navigability. Included in the expedition was Dr. Samuel W. Woodhouse, a thirty-year-old physician and naturalist. Although Sitgreaves's report of the expedition is only eighteen pages long, Woodhouse kept four detailed pocket diaries of the expedition's explorations from San Antonio to San Diego, including notes on the topography, plants, and animals they encountered. His diaries also provide the first detailed descriptions of the native peoples of the area. 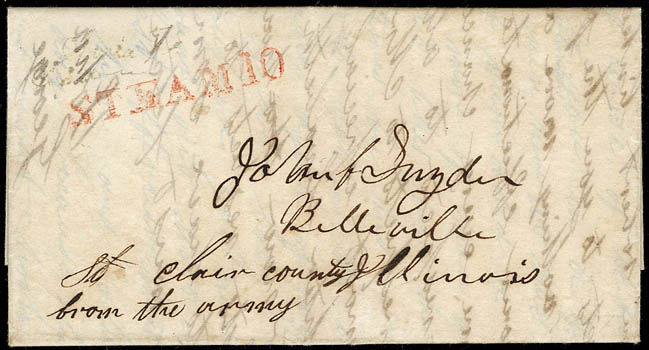 (Trail Letters) Santa Fe Trail Letter. "September the 30th 1847" dateline on folded letter addressed to "Belleville, St. Clair County, Illinois/from the Army" with red St. Louis straight line "Steam 10" handstamp, carried by military express to the Missouri River where it was placed on board a steamboat bound for St. Louis, letter with interesting Military content which mentions "7000 Mexicans at the Pass"…, "Newbe is not thought more of than a dog, there is not one man that likes him here, he was shot at 7 times by his own men"…, "We have found out that Lieutenant Lucky is the best liked officer…", letter probably written from Santa Fe, Very Fine.
Estimate    $500 - 750.