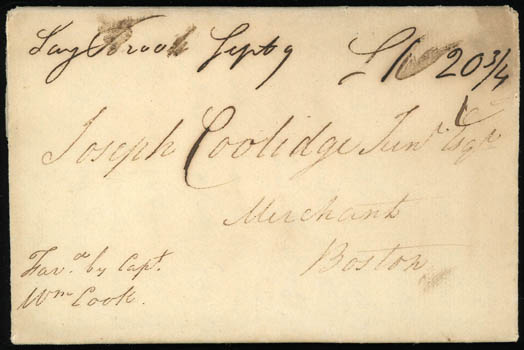 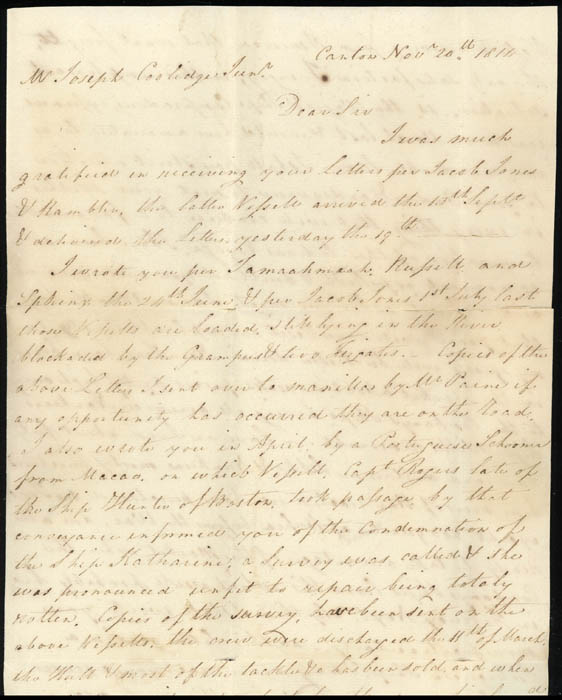 AN EXCEPTIONALLY EARLY AND RARE INCOMING LETTER FROM CHINA TO THE UNITED STATES DURING THE WAR OF 1812 DESCRIBING THE TROUBLES OF WAR AFFECTING THE FAR EAST TRADE.

Interesting letter from Canton showing the difficulties of Far East mail conveyance and multiple copies needing to be sent, "I was much gratified in receiving your Letters per Jacob Jones & Rambler… I wrote you per Tamaahmach, Russell and Sphinx the 24th June, & per Jacob Jones 1st July last, those vessels are loaded lying in the River blockaded by the Grampus & two Frigates. Copies of the above Letters I sent over to manilla by Mr Paine if any opportunity has occurred they are on the road. I also wrote you in April by a Portuguese Schooner from Macao on which Vessel Capt Rogers of late of the Ship Hunter of Boston took passage by that conveyance informed you of the Condemnation of the Ship Katherine, a Survey was called & she was pronounced unfit to repair being totaly rotten… In case of peace, the only Vessel in this River on which I could ship your property was the Meridian late Capt. Woodward. But that vessel, only four years old, two of which she has been on this river, is completely rotten & will certainly be condemned…I hope that peace will soon visit our deplorable County, or my spririts will be broken down…have on hand about forty thousand dollars in Silks & Nankeens mostly purchased before news of War reached us. have purchased no Teas except 200 quarters of Bohea before the War…I write you now particularly - as this letter goes in a Portugese Ship & may never reach you… Wm. Blanchard". 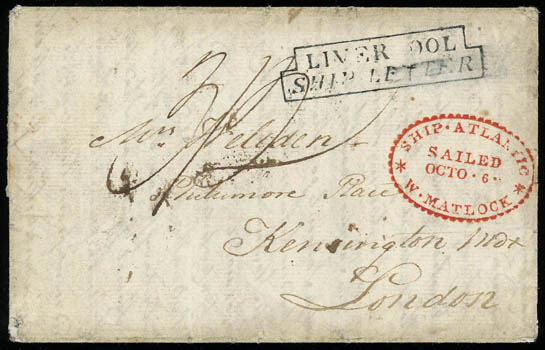 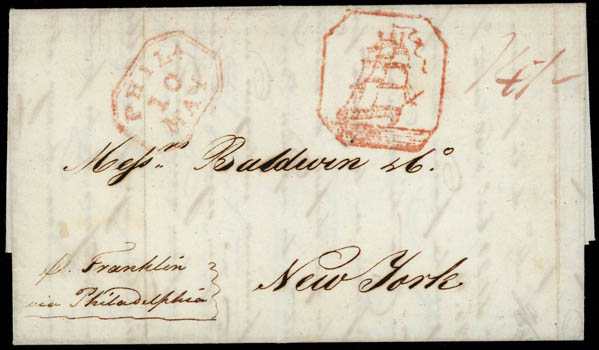 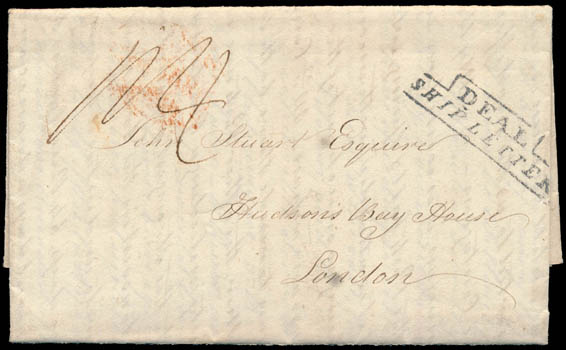 The autographed signed letter from Alexander Roderick McLeod, a Chief Factor with the Hudson's Bay Co. in charge of the Athabasca district when this letter was written, comments on the year's poor results due to a bad season and, "…there is still a much greater evil lurking about, i.e. the small Pox, it has (caused) awful ravages among the Plains Tribes in the Saskatchewan…vaccination has been resorted to, as the most effectual means of avoiding the Contagion…it is considered expedient that I should see most of the Post fall & spring, which I admit is very proper, but it is attended with inconveniences, arising from my being so much out of the way, when the Expresses pass and repass…". 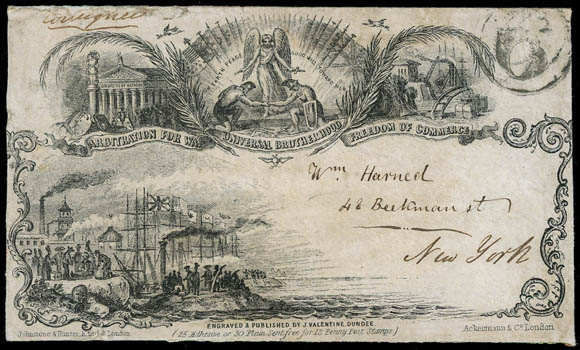 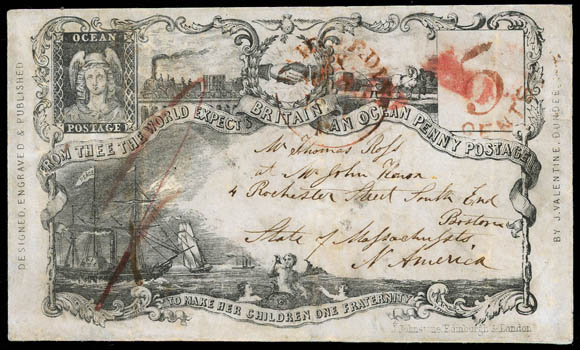 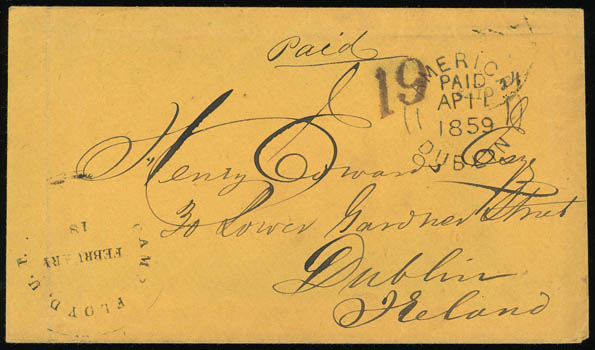 AN EXCEPTIONALLY RARE CAMP FLOYD UTAH TERRITORIAL TRANSATLANTIC USE WITH A CHOICE STRIKE OF THE RIMLESS POSTMARK.

The letter likely traveled East from Camp Floyd by stage or horse via the Salt Lake City to St. Joseph route, where it then went to New York by rail. It left New York Mar. 30th on the Cunard Line "Asia", arriving at Liverpool Apr. 10th. From there, it went by rail to Holyhead, across the Irish Sea by boat, to Dublin. 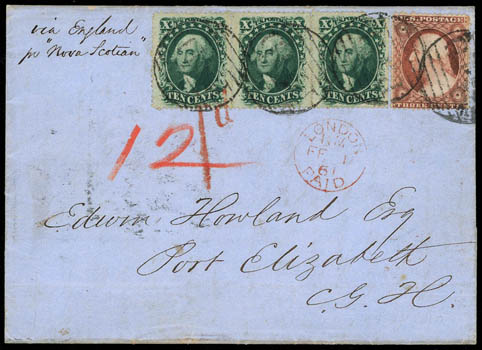 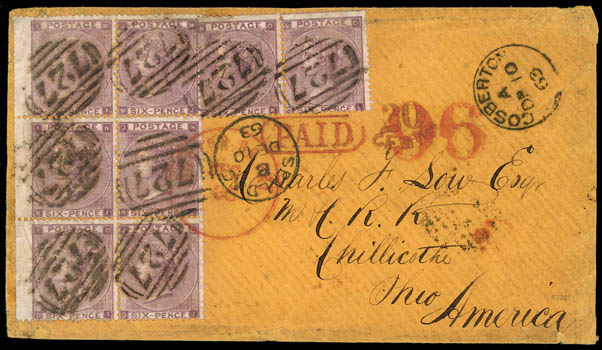 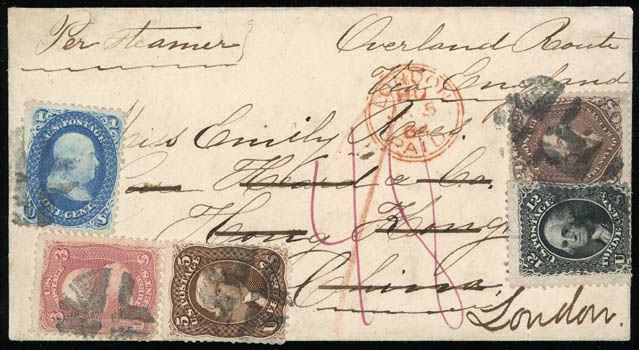 A SPECTACULAR FIVE-COLOR FRANKING OF THE 1861 ISSUE TO HONG KONG AND FORWARDED TO LONDON.

At the time of mailing, there was a 45¢ rate via Southampton and a 53¢ rate via Marseilles. The 45¢ franking indicates the cover was fully paid for the route via Southampton, but the magenta "48" credit indicates that the cover was treated as fully prepaid for the route via Marseilles. The best explanation is that the New York exchange office sent the cover to Boston to make the Cunard sailing on December 23, 1863, and the miss-rating was overlooked. In Southampton, the letter was put in a closed mail bag and sent overland to Marseilles, France. At Marseilles, the letter departed Jan. 13th on the P&O Line "Vectis", arriving at Alexandria, Egypt Jan. 19th. From there, it went overland to Suez where it departed Jan. 20th on the P&O Line "Mooltan", arriving at Galle, Ceylon Feb. 5th. There, it changed ships and left Feb. 5th on the P&O Line "Orissa" arriving in Hong Kong Feb. 25th 1864.