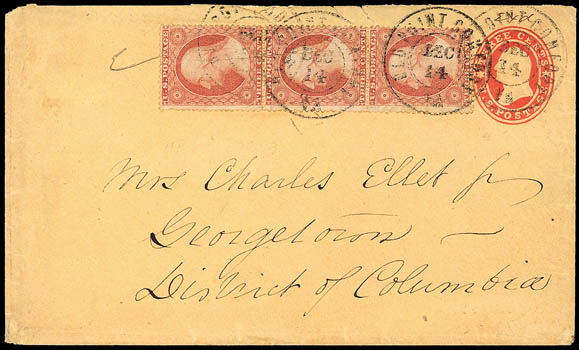 The earliest use of this Old Point Comfort Va. postmark is December 6th 1861, positively dating this cover to 1861.

Charles Ellet, Jr. was an important engineer, having designed and built the first suspension bridge in the Americas in 1842, over the Schuylkill River in Philadelphia. In 1853 he became chief engineer for the Virginia Central Railroad. He played a strategic role in the naval aspects of the Civil War, having proposed conversion of steamships into naval ram vessels. After the CSS Merrimac was built according to Ellet's plans, did the North act by appointing him Colonel of Engineers and commissioned to buy vessels for conversion into rams. On June 6th 1862, a battle was fought in which he commanded the USS "Queen of the West" and rammed the CSS "Colonel Lovell", cutting her nearly in two and sinking almost immediately. Ellet was in an exposed position and was shot in the knee that led to his death.