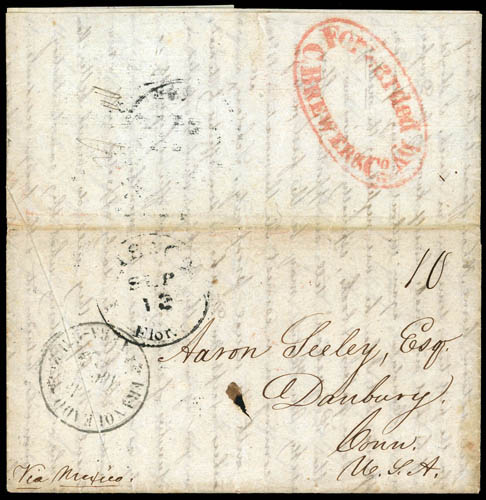 A REMARKABLE USE FROM HAWAII TO CONNECTICUT VIA MEXICO AND FLORIDA DURING THE MEXICAN WAR ROUTE DISRUPTION.

ONE OF ONLY THREE RECORDED EXAMPLES OF THE C. BREWER & CO. OVAL FORWARDERS HANDSTAMP.

Cooke began this letter with the hope that a ship would arrive soon, bound for Mexico; on June 3rd he writes: "that a vessel sails for Mazatlan today at noon, so I must hurry…there has been an arrival of an English war steamer with two masts. She remained in our harbor eight days & was visited by large number of natives & foreigners. This mission & their children were invited & so were chiefs & scholars. To the natives & our children it was a novel sight. I think the time is not distant when we shall have steamers plying between this & other ports of the ocean & the two continents, America & Asia. The Sandwich Islands are becoming the centre of much influence & we hope that influence is growing better, as well as wider…The Congress, Commodore Stockton,is daily expected with a new commissioner, & a new consul. We hope they will do much better than the present incumbents, who are still doing what they can to destroy the Government & foment quarrels between it & the foreign residents. Mr. Brinsmade since his return has joined with them & I trust will soon get to the end of his rope. He has fallen from his former height & will fall still lower if he does not cease his opposition to Government. Other foreigners against their own good unite with Messr. Brown, Ladd, Hooper & Brinsmade, who have no business but to find fault with Govt. …My position brings me in close contact with the Govt. of these Is. & if I should continue in this school I may think it to be my duty to take the oath of allegiance, & become a subject of his Majesty. But in this, I shall make haste, slowly, for at present it appears a leap in the dark…" Peter Brinsdale had gone to Europe for the purpose of creating a joint stock company to take over the the proprieties & rights of Ladd & Co. of Hawaii. However, a contract with a Belgian company, also signed by Kamehameha III, ended in the ruination of Ladd & Co. and Brimsdale's humiliation;

This cover, along two others (census no. 59 and 61), were carried by the French bark "Jeune France" from Honolulu departing Jun. 4th 1846 to Mazatlan. Forwarded in the Mexican post most likely by Messr. Mott, Talbot & Co. to Vera Cruz where marked Paid Aug. 13th and sent out to the blockading squadron probably by the British consul. Then sent by USS "Princeton" to Pensacola Fla. where entered the mails 10¢ due (no ship fee added because letters were entered by a U.S. naval ship). From Pensacola, the letters went north in the Great Northern Mail. Total transit time was just 109 days, quite good considering the conditions. 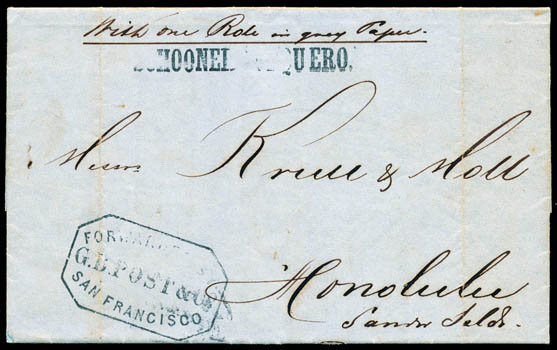 ONE OF ONLY THREE RECORDED STRIKES OF THE SCHOONER 'VAQUERO' SHIP HANDSTAMP WITH SINGLE QUOTATION MARKS. A REMARKABLE USE FROM TAHITI VIA SAN FRANCISCO TO HONOLULU.

The Schooner "Vaquero" departed San Francisco on May 23rd with the New York mail of Apr. 20th and European mail of Mar. 31st., arriving at Honolulu on Jun. 5th. 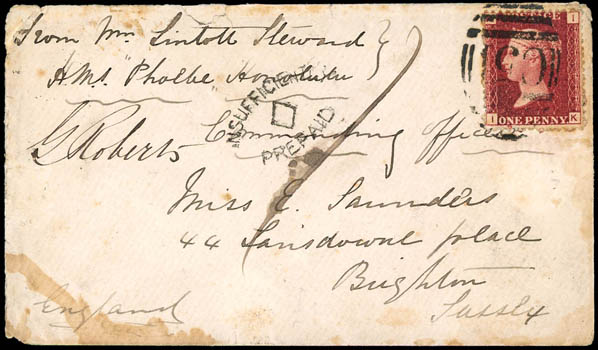 THE ONLY RECORDED BRITISH SAILOR'S LETTER ORIGINATING AT HONOLULU SENT AT THE CONCESSIONARY RATE VIA ST. THOMAS.

Frigate "Phoebe" was part of the Flying Squadron World Cruise (1869-1870) under the command of Rear Admiral Geoffrey T. Hornby comprising four frigates and two corvettes. The cruise was organized by the Lords of the Admiralty for three reasons: to keep up the waning prestige of the wooden ships, to show the British flag in diverse parts of the world and for the furtherance and instruction of seamanship. The squadron set sail from Plymouth in June 1869 to return home in November 1870 having circumvented the world, made seventeen ports of call and sailed some 53,000 miles. This was to be the last government sponsored naval expedition around the world conducted under sail. The squadron was in Port at Honolulu from Jun. 16th to Jun. 23rd 1870.