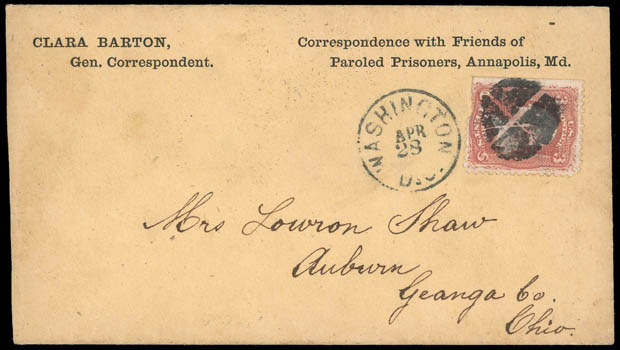 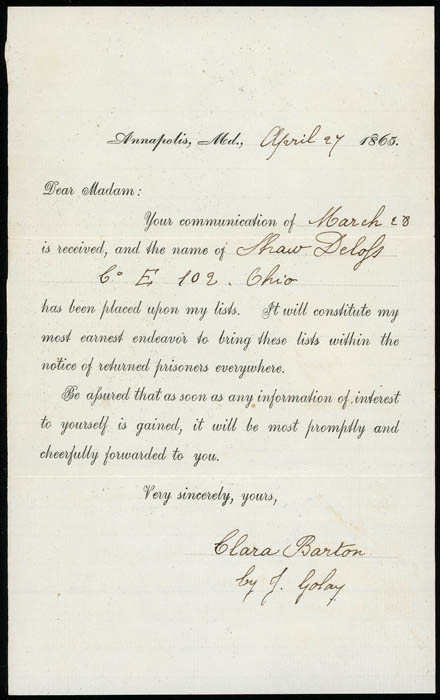 Confederacy, Clara Barton, Gen. Correspondent - Correspondence Office with Friends of Paroled Prisoners, Annapolis, Md., printed corner card cover to Auburn, O., franked with 1861, 3¢ rose (flaw) canceled by "Washington, D.C., Apr 28" cds and quartered cork duplex, with original enclosure of a printed form letter datelined "April 27, 1865" and signed by Clara Barton with note reading…Your communication of March 28 is received, and the name of Shaw Delos, Co. E 102 Ohio has been placed upon my lists. It will constitute my most earnest endeavor to bring these lists within the notice of returned prisoners everywhere. Be assured that as soon as any information of interest to yourself is gained, it will be most promptly and cheerfully forwarded to you., Extremely Fine.
Scott No. 65    Estimate $3,000 - 4,000.

A REMARKABLE MISSING PRISONER OF WAR NOTICE LETTER SIGNED BY CLARA BARTON - LATER TO BE FOUNDER OF THE AMERICAN RED CROSS.

After the end of the American Civil War, Clara Barton discovered that thousands of letters from distraught relatives to the War Department were going unanswered because the soldiers they were questioning about were buried in unmarked graves. Many of these soldiers were labeled just as "missing". Motivated to do more about the situation, Miss Barton contacted President Lincoln in hopes that she would be allowed to respond officially to these unanswered inquiries. She was given permission, and "The Search for the Missing Men" commenced.

After the war, she ran the Office of Missing Soldiers in Washington, D.C. The office's purpose was to find or identify soldiers killed or missing in action. Barton and her assistants (including Jules Foley who is given credit in letter) wrote 41,855 replies to inquiries and helped locate more than twenty-two thousand missing men. Barton spent the summer of 1865 helping find, identify, and properly bury 13,000 individuals who died in Andersonville prison camp, a Confederate prisoner-of-war camp in Georgia. The union soldier in the above notice was one of these prisoners of Andersonville, and was paroled on April 18th shortly before Barton's letter of reply was written.

She continued this task over the next four years, burying 20,000 more Union soldiers and marking their graves. Congress eventually appropriated $15,000 toward her project. 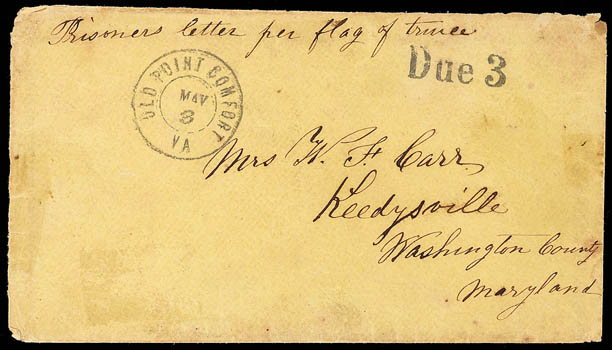 A VERY RARE USAGE FROM CASTLE THUNDER WITH ONLY 11 COVERS RECORDED FROM THIS CAMP, ESPECIALLY CONTAINING THE FULL LETTER.

The original lengthy letter is datelined "Richmond, Va / Castle Thunder April 25, 1864", and reads in part "My imprisonment seems to have changed my whole being, yes my very soul…I thank my God, that it has made me learn to be a better Christian and to think more seriously of death, and my God."

The Castle Thunder Complex was composed of Greaner's, Whitlocks and Palmers Tobacco Factories joined by a fence forming a compound. The prison's most notorious commandant was Capt. George W. Alexander. As a Confederate solider fighting in Maryland, Alexander was captured in 1861. While awaiting execution by the Union Army, he escaped and fled to Richmond. Once in Richmond, Alexander took command of the Castle Thunder Prison. Security at the prison was intense under Alexander, and prisoners are said to have complained of Alexander's brutality. 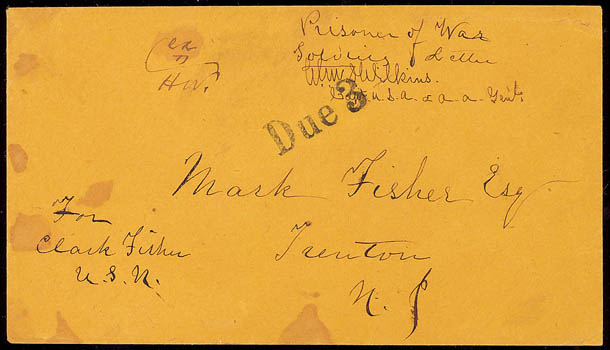 A RARE EXAMPLE OF THE COMMANDANT HENRY WIRZ'S CENSOR MARKING ON A FLAG-OF-TRUCE COVER FROM LIBBY PRISON.

Henry H. Wirz took command of Libby Prison beginning in late 1862. In March 1864, he was assigned to Andersonville (Camp Sumter). After the war, Wirz was charged with conspiracy and murder by Federal authorities. His trial was held in the Capitol building in Washington and was presided over by Union General Lew Wallace. A number of former prisoners testified on conditions at Andersonville, many accusing Wirz of specific acts of cruelty (some of these accounts were later called into question by historians as exaggerated or false). The court also heard from Confederate officers and considered official correspondence from captured Confederate records. Wirz presented evidence that he pleaded to Confederate authorities to try to get more food and maintained that he tried to improve the conditions for the prisoners. Wirz was found guilty of murder and was sentenced to death. On November 10, 1865, he was hanged in Washington at the site of the current Supreme Court building -- the only Confederate official to be tried, convicted and executed for war crimes resulting from the Civil War.

References: Illustrated in Harrison on page 92. 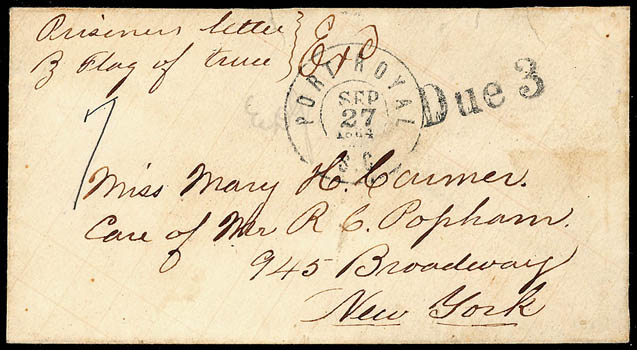 A SCARCE PRISONER USE FROM ROPER HOSPITAL, THERE ARE 19 COVERS RECORDED. 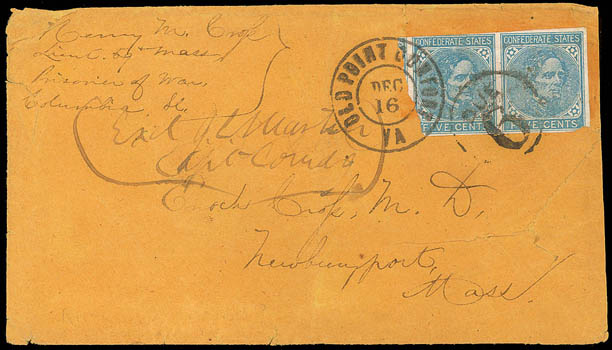 ONE OF ONLY 20 RECORDED COVERS FROM CAMP SORGHUM, THIS BEING A PARTICULARLY SCARCE PRISONER USE BEARING THE 1862 5¢ BLUE.

There were three prisons in Columbia. Galen Harrison recorded only 15 total prisoner usages bearing the 1862, 5¢ blue #7. 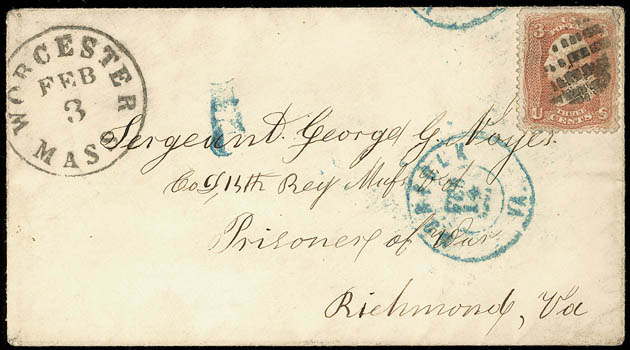 ONE OF ONLY FOUR RECORDED POW COVERS FROM TAYLOR'S TOBACCO WAREHOUSE IN RICHMOND VA.

George Gustavus Adams Noyes enlisted in Company D, Massachusetts 15th Infantry Regiment on July 12, 1861, and served alongside his brother Francis H. Noyes who died at Antietam in September 1862. On October 21, 1861, George was taken prisoner at the Battle of Ball's Bluff, in Leesburg Va. After exchange in late February 1862, he was mustered out on disability in April 1863. He died in 1905.

Taylor's Tobacco warehouse opened as a prison following the Battle of Ball's Bluff on October 28, 1861. Regimental histories report that all the men from the 15th Massachusetts were confined at Taylor's following the battle. Residents of Massachusetts were the first to form a relief effort for their imprisoned soldiers and raised several hundred dollars to purchase necessities to send to the men (Harrison, p. 101).