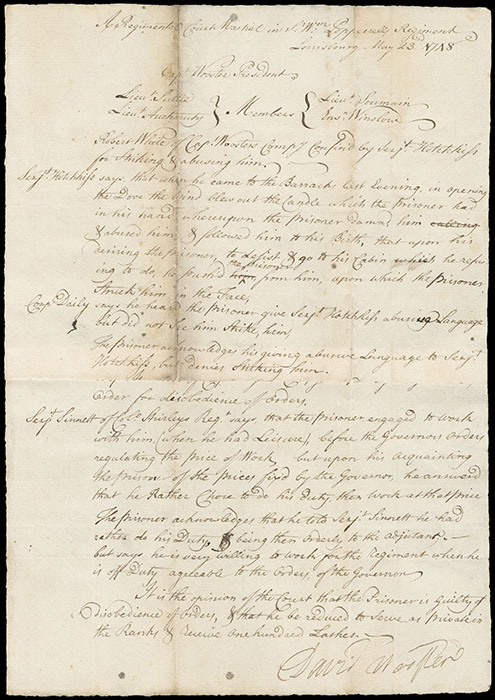 Nova Scotia, "A Regimental Court Martial in Sr. Wm. Pepperrells Regiment, Louisbourg, May 23rd 1748", letter describing court martial signed by Capt. Wooster as President concerning "Robert White of Capt. Woosters Compy confin'd by Sergt. Hotchkiss for Striking and abusing him" and goes on in detail concerning the event and a second "Corpl. Morrison of Capt. Boyles Compy confin'd by the Governors Order for disobedience of Orders, both were found guilty and given 50 and 100 lashes respectively; file folds, Very Fine.
Estimate    $1,500 - 2,000.

William Pepperrell was one of several people who proposed an expedition against the French Fortress of Louisbourg. He gathered volunteers, financed and trained the land forces in that campaign. When they sailed in April 1745, he was commander-in-chief, supported by a British naval squadron under Captain Peter Warren, appointed Commodore on a temporary basis. They besieged Louisbourg, then the strongest coastal fortification in North America and captured it on June 16th after a six-week siege. 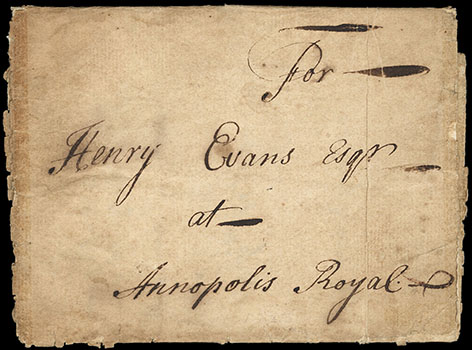 Nova Scotia, 1763 (Aug. 18) Groton Mass. to Annapolis Royal N.S., datelined folded letter carried privately by ship, Oliver Prescott writes: "I should have wrote to you much oftener if I could have found a conveyance", some toning and significant edge splitting, Fine, ex-MacDonald.
Estimate    $1,000 - 1,500.

POSSIBLY THE EARLIEST CORRESPONDENCE TO THE COLONY IN PRIVATE HANDS.

Oliver Prescott (1731-1804) was a colonial-era physician, soldier and judge. The letter is addressed to Henry Evans who had led a group of 47 people from Massachusetts to settle on land in the Annapolis Valley that was vacant after the Acadians were expelled in 1755. 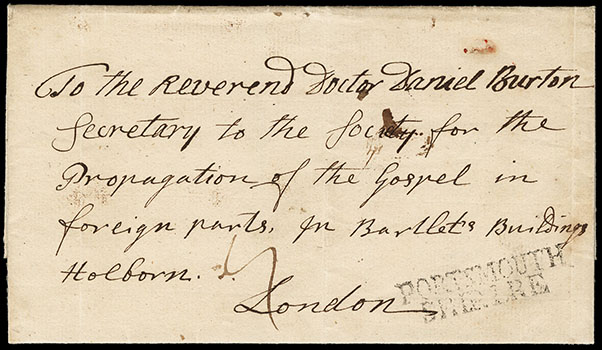 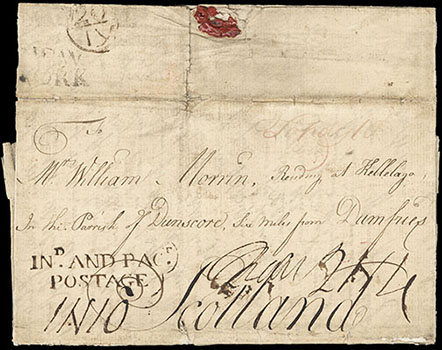 Nova Scotia, 1772 (Apr. 3) Eglinton N.S. to Kellelaga, Scotland via Boston and New York, folded letter with "Eglinton, April 3, 1772" dateline and instructions for directing a return letter to "the Windsor road 24 miles from Halifax", sent by private ship to Boston where faint magenta "BOSTON" straightline and Franklin mark struck, manuscript "To pay 10d" for mailing to New York, flap with "NEW / YORK" two-line handstamp, carried to London by New York-Falmouth packet, reverse with London "20/IY" Bishop mark and front with "IND. AND PACT./ POSTAGE" two-line handstamp and "1N10" rating, forwarded to Scotland with "In All 2N4" total due; edge wear and splits along folds reinforced with hinges, Very Fine, A rare Canadian routing through the United States to Scotland. ex-Steinhart, Siskin, Robertson.
Estimate    $6,000 - 8,000.

AN OUTSTANDING NOVA SCOTIA TO SCOTLAND CROSS-BORDER COVER THROUGH BOSTON AND NEW YORK WITH THE RARE "IND. AND PACT. POSTAGE" STRAIGHTLINE HANDSTAMP.

The letter was carried by private ship to Boston, entered the post to New York with the rating "To Pay 10d Stg" for 200-300 miles, carried to London by the Falmouth packet, London "IND. AND PACT. POSTAGE" handstamp and 1 shilling 10 pence rating for the combined British 1 shilling packet rate plus 10 pence American internal postage, forwarded to Scotland and re-rated 2 shillings 4 pence collect. One of Only a few recorded examples of this style "Ind. and Pact. Postage" handstamp and, most likely, the only cross border usage. 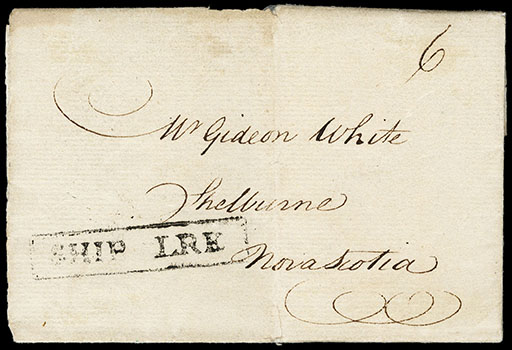 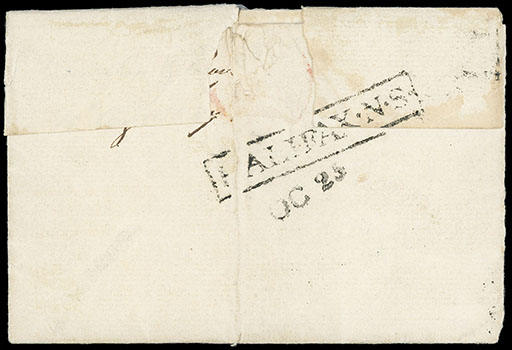 At Shelburne, the second Post Office in the Colony was opened on November 5th 1783. It served the largest community in British North America at the time, larger than Quebec and Montreal together. The boxed Halifax postmark was used 1786 to 1895, and the matching ship letter marking used 1788 to Mar. 20th 1820. 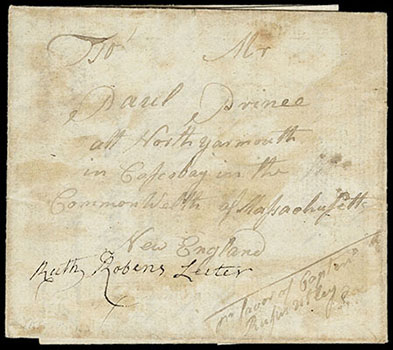 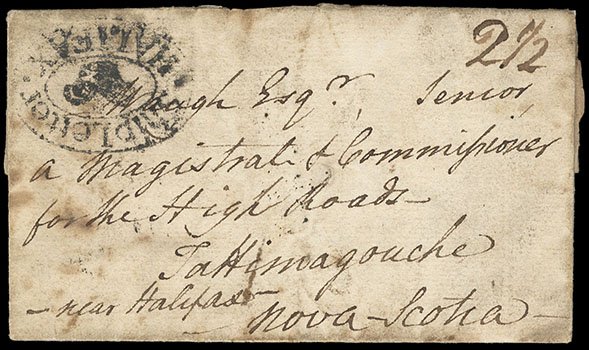 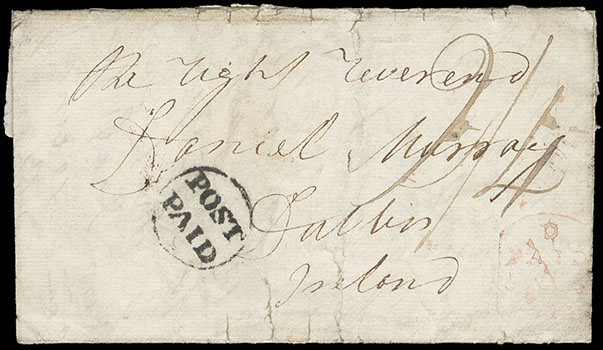 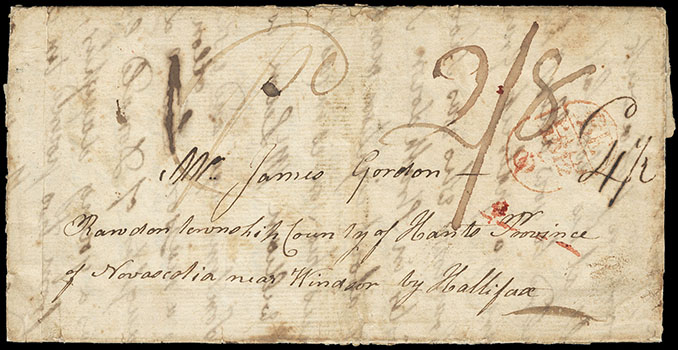 This letter was delayed due to the War of 1812. 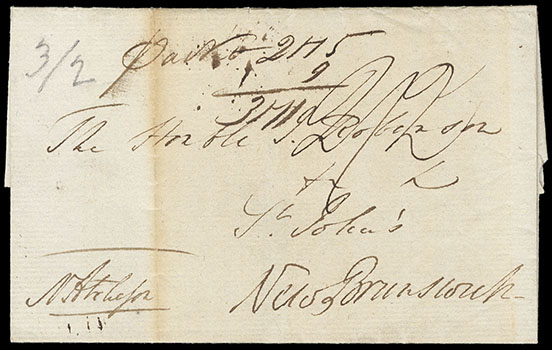