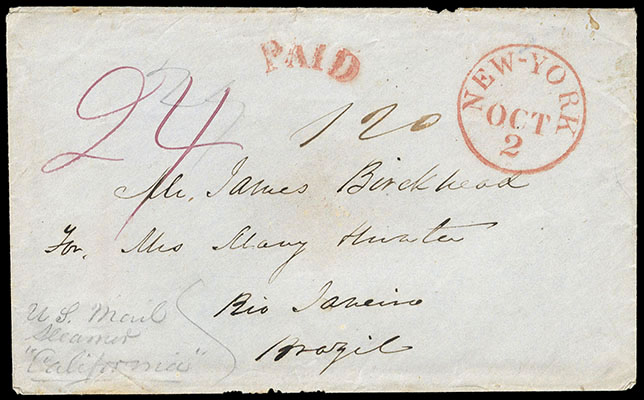 THE ONLY RECORDED COVER CARRIED ON THE MAIDEN VOYAGE OF PACIFIC MAIL STEAMSHIP COMPANY CALIFORNIA TO THE PACIFIC COAST, INAUGURATING CONTRACT MAIL SERVICE VIA PANAMA TO CALIFORNIA.

The "24" rate was published as being available to South American ports to be visited on her voyage around the Horn to California. 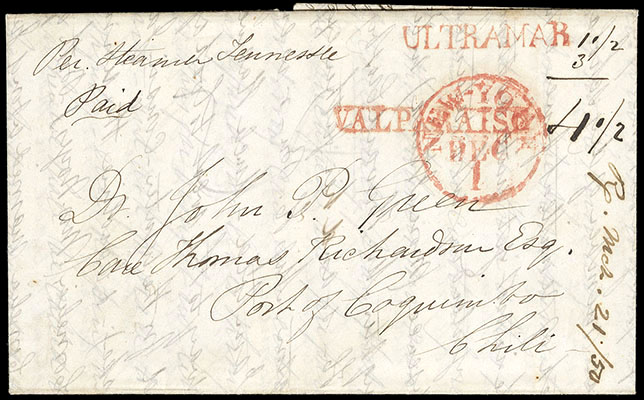 THE ONLY RECORDED USE CARRIED ON THE MAIDEN VOYAGE OF THE PACIFIC STEAM NAVIGATION CO. TENNESSEE TO THE PACIFIC COAST TO START WEST COAST OPERATIONS. 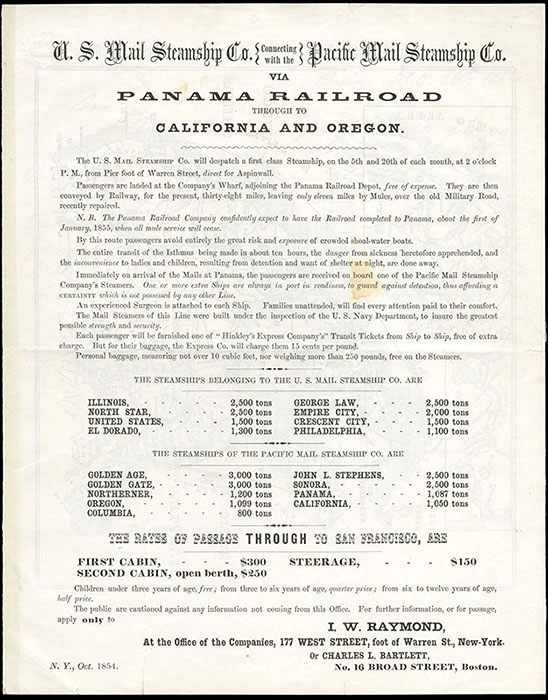 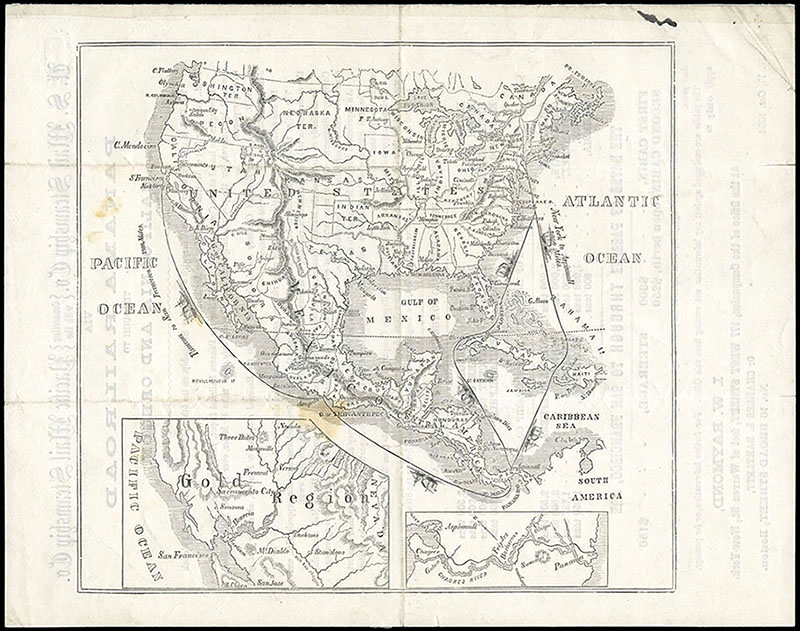 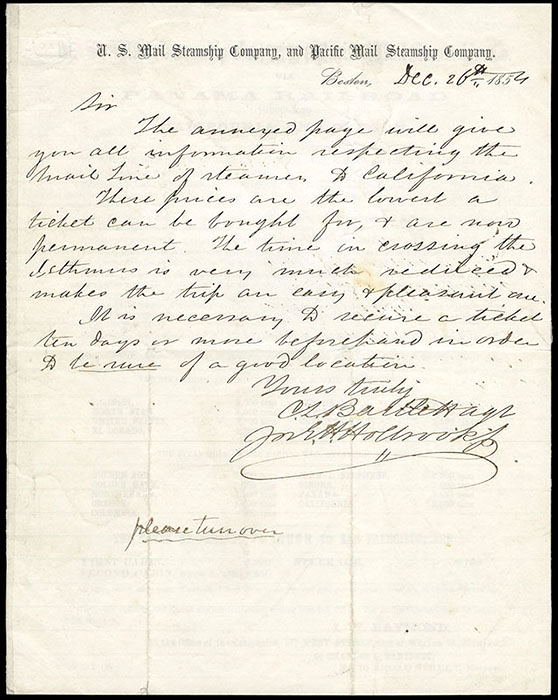 (Via Panama) 1854 (Dec. 26) U.S. Mail Steamship Co., and Pacific Mail Steamship Co., letter and broadside datelined "Boston, Dec. 26th, 1854" with printed overview of both lines including each steamship connecting "Via Panama Railroad through to California and Oregon" and a map on reverse showing the routes, written letter reads "…The annexed page will give you all information respecting the Mail Line of steamers to California…The time in crossing the Isthmus is very much reduced & makes the trip an easy & pleasant one…"; splitting along fold reinforced, Very Fine and remarkable broadside letter.
Estimate    $1,500 - 2,000. 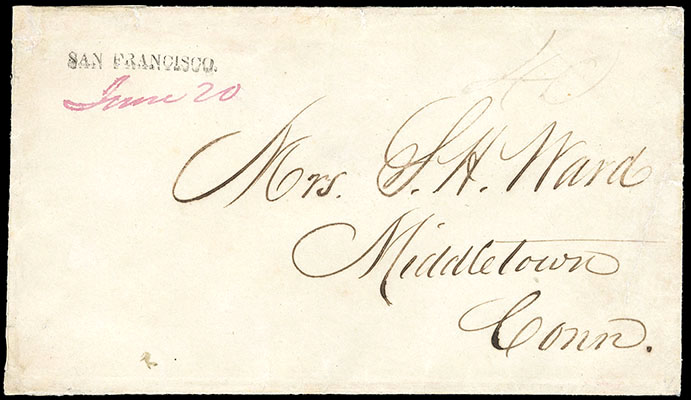 A RARE FIRST DAY OF USAGE OF THE SAN FRANCISCO STRAIGHT LINE HANDSTAMP, ONE OF ONLY EIGHT FROM THE FIRST CONTRACT SAILING OF THE PMSS PANAMA. 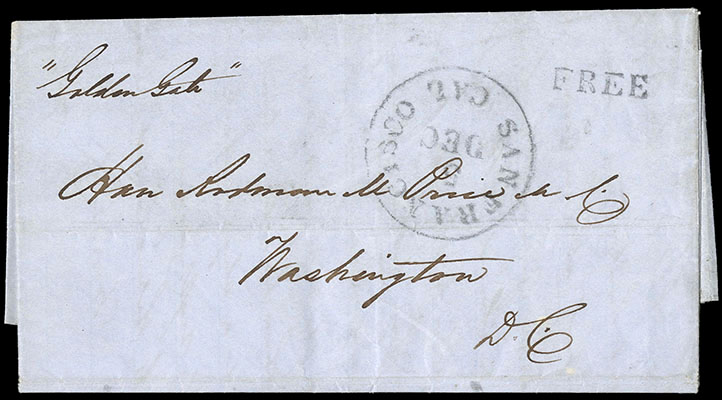 CARRIED ON THE MAIDEN MAIL CARRYING VOYAGE OF THE PMSS GOLDEN GATE. 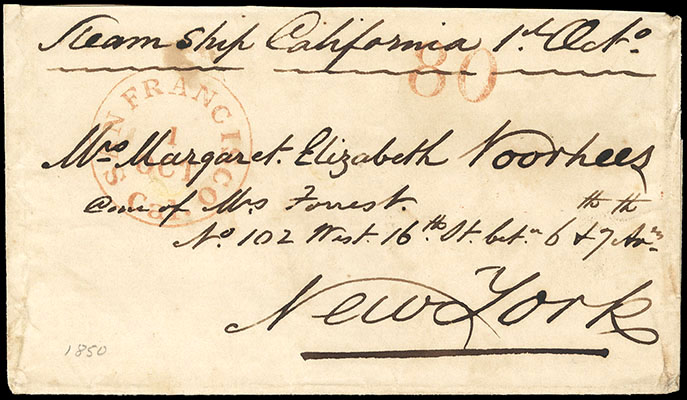 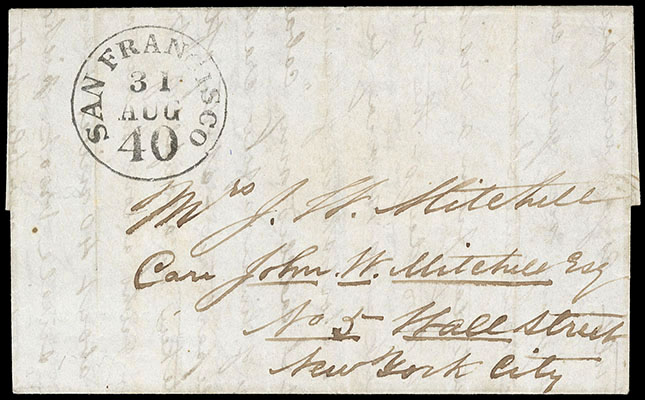 The "Northerner" served on several routes over the years. She began service on the New York to Charleston route for Spfford, Tileston before being sold to Charles Morgan who moved her to California waters where she was operated with the "Crescent City". When operating together, they came to be known as the Empire City Line. The pairing was very brief and she was purchased by the Pacific Mail Steamship Company in December 1850. 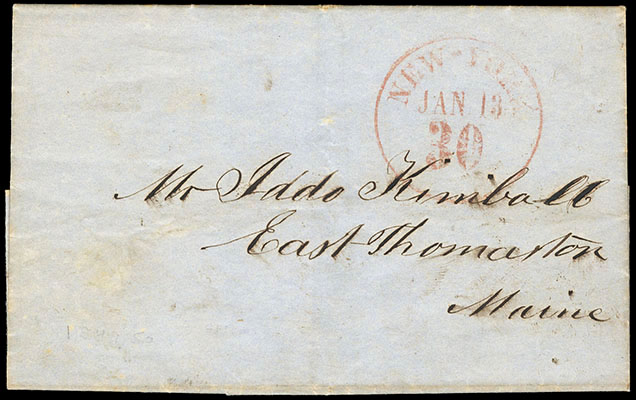 CARRIED ON THE MAIDEN RETURN VOYAGE OF HOWLAND AND ASPINWALL'S CHEROKEE.

There are fewer than 5 recorded examples of the rare "New-York '30' Jan 13" integral-due cds, which is known used for this voyage of the "Cherokee" only. The New York Herald listed Cherokee as a mail steamship, but this was incorrect. The confusion about the Cherokee being a mail steamship on this voyage may have come from the actions of mail agent A. Clinton McLean. He was in charge of the mails from California that reached Panama on Dec. 5th and Dec. 29th. He accompanied these mails to New York on the Cherokee. It appears that he had missed the sailing of the contract mail steamer, "Falcon", that cleared Chagres on January 1, 1850. Howland and Aspinwall's Pacific Mail Steamship Company had the mail contract for the Pacific route, but not for the route on the Atlantic side. They did operate steamships on the Atlantic route until April 1851, the "Cherokee" being their first. 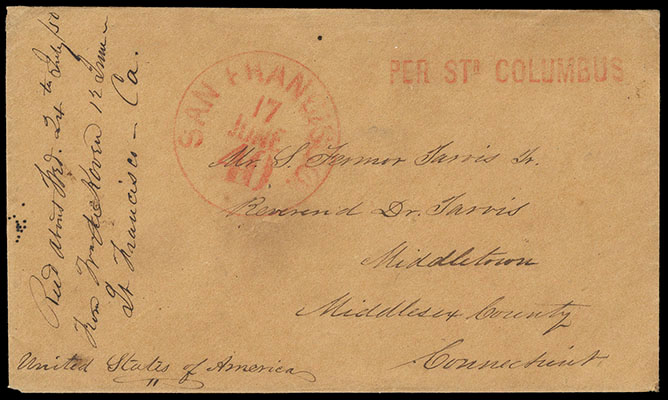 A RARE USAGE CARRIED BY GEORGE LAW'S "COLUMBUS" FROM SAN FRANCISCO TO PANAMA ON HER MAIDEN VOYAGE. THE FINEST RECORDED USE OF THE SAN FRANCISCO "PER STR. COLUMBUS" STRAIGHTLINE.

On June 6th 1850, George Laws steamship "Columbus" arrived at San Francisco and on June 19th she started the first of only two voyages to Panama (Columbus carried mail on her maiden round voyage and a second voyage to Panama). Allen had a "Per Str. Columbus" straightline directional handstamp made up to indicate that these letters were to be bagged for Law's Line and not the contracted carrier. It appears this arrangement was made without consulting Washington D.C., and probably after intervention by William Aspinwall, the arrangement ended after only three round trips. 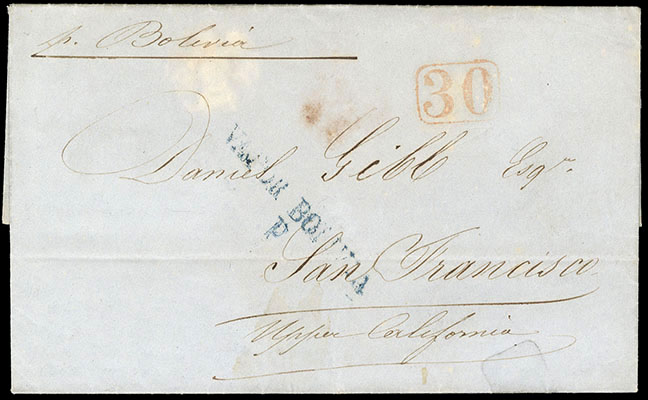