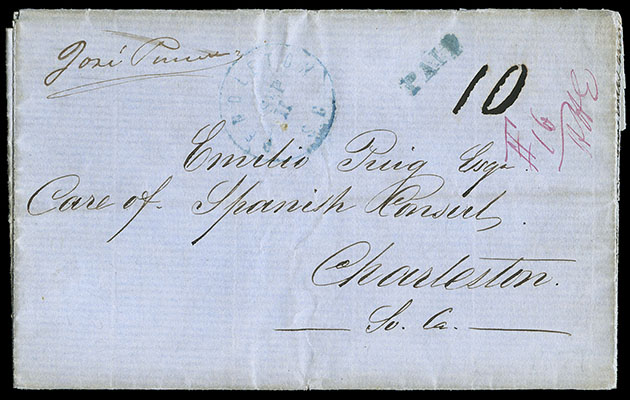 A RARE COVER TAKEN FROM A CAPTURED VESSEL EN ROUTE FROM CHARLESTON TO HAVANA, THEN USED AS EVIDENCE IN THE NEW YORK PRIZE COURT.

In late 1861, a new Spanish steam ferry boat "Nuestra Senora de Regla", enroute from the builder in New York to its owner in Cuba, put into Charleston S.C. for repair of damages incurred during a hurricane. The repaired ferry boat left Charleston at the end of November 1861 with Mr. Puig aboard as a passenger. The ferry boat was stopped by U.S. blockaders near Port Royal S.C. and Mr. Puig's sack of Confederate mail was found aboard. Consequently, the "Nuestra Senora de Regla" was claimed as a prize and was sent, along with Mr. Puig, to New York to be processed by the New York prize court. This case, adjudicated in favor of the blockaders, was appealed by the Spaniards all the way to the U.S. Supreme Court that reversed the findings in favor of the Spaniards, a very rare occurrence. The red manuscript "F" and "No. 16" are case number and evidence number docketing with the "H.H.E." initials below of H.H. Elliott, the New York Prize Court Commissioner. 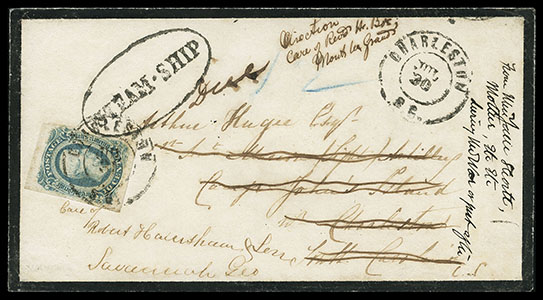 A WONDERFUL INBOUND BLOCKADE COVER FORWARDED WITH THE 1863 10¢ DAVIS ISSUE TO SAVANNAH, GA. 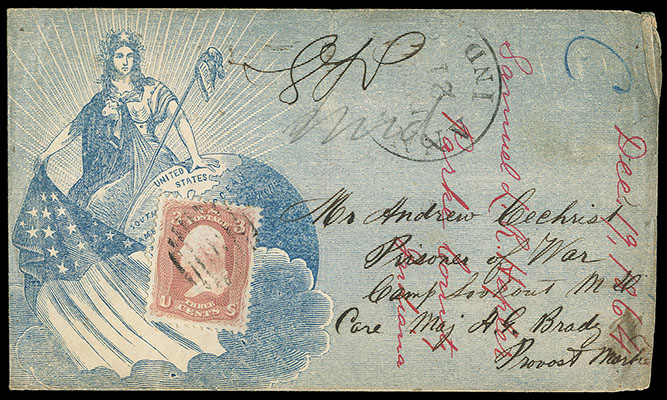 A RARE PATRIOTIC USE DURING THE CIVIL WAR TO A CONFEDERATE PRISONER AT POINT LOOKOUT MD. 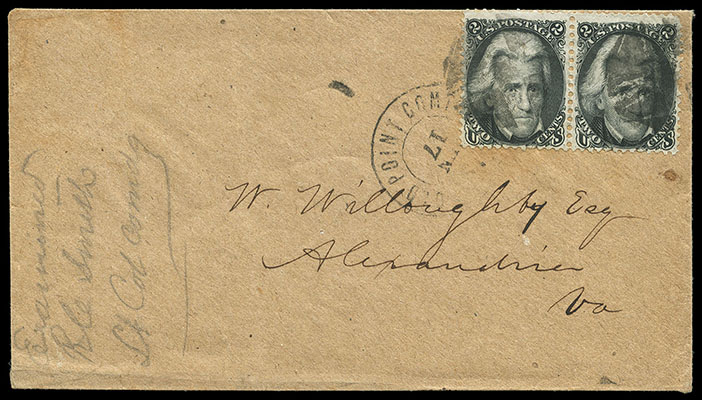 ONE OF THE FINEST KNOWN USAGES FROM THE DANVILLE PRISON - BEARING A PAIR OF THE U.S. 2¢ BLACKJACK ISSUE.

Doctor (actually his first name) Tarbell was captured by Confederate cavalry on September 21, 1864 near Winchester Va. He was taken to Libby Prison in Richmond, then transferred to Salisbury, N.C., then to Danville Prison and then back to Libby again on Feb. 18, 1865 before being paroled a few days later. The major portion of the Tarbell correspondence is at the University of Michigan Library. Doctor Tarbell enlisted May 1st, 1861 as a sergeant in Co. A NY 32nd Infantry. He rose through the ranks to Brevet Major and was a Commissary of Subsistence. 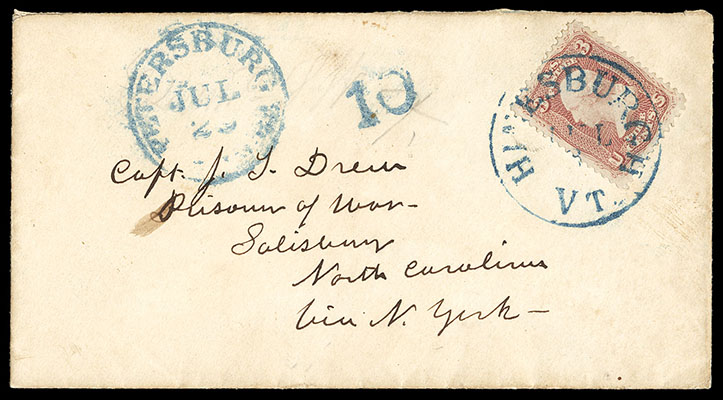 A CHOICE VERMONT FLAG-OF-TRUCE COVER THROUGH PETERSBURG, WHICH WAS OPEN AS AN EXCHANGE POINT FOR ONLY FOUR MONTHS IN 1862.

John Theophilus Drew, UVM Class of 1863 was born in Danville Vt. on June 8th 1834. On the breaking out of the rebellion in April 1861, at the first public call in Burlington for volunteers, he enlisted, threw his whole energies into the work of enlisting others, was chosen and commissioned as captain of Company G, Second regiment. The regiment arrived in Washington and was ordered across the Potomac just in season to take part in the first battle of Bull Run. Capt. Drew was suffering from illness but could not be kept in camp. In endeavoring to follow the retreating rabble of the Union army he was taken prisoner, carried to Richmond, Libby Prison, Salisbury, Columbia and Charleston, whence he was exchanged in the summer of 1862 after fourteen months imprisonment.