Registered Mail & Transit to Other Countries (by Country) 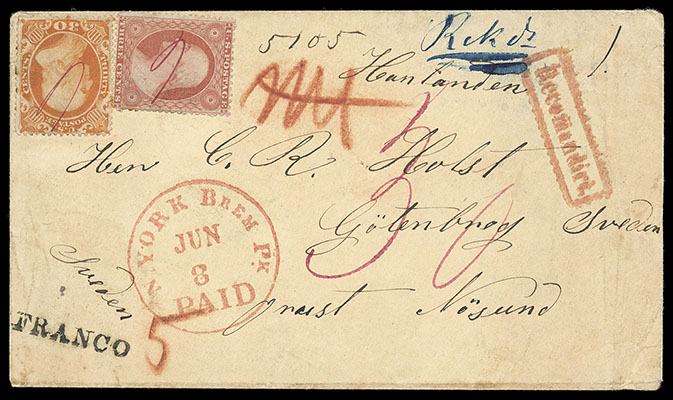 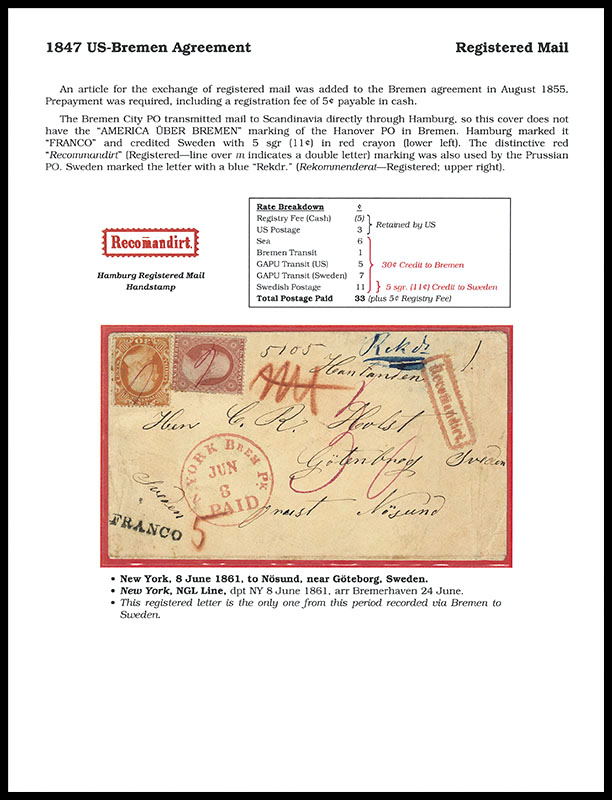 THE ONLY RECORDED REGISTERED COVER VIA BREMEN TO SWEDEN FROM THIS CLASSIC PERIOD.

An article for the exchange of registered mail was added to the Bremen agreement in August 1855. Prepayment was required, including a registration fee of 5¢ payable in cash.

The Bremen City PO transmitted mail to Scandinavia directly through Hamburg, so this cover does not have the "AMERICA UBER BREMEN" marking of the Hanover PO in Bremen. Hamburg marked it "FRANCO" and credited Sweden with 5 sgr (11¢) in red crayon (lower left). The distinctive red "Recomandirt" (Registered-line over m indicates a double letter) marking was also used by the Prussian PO. Sweden marked the letter with a blue manuscript "Rekdr." (Rekommenderat-Registered) at top right. 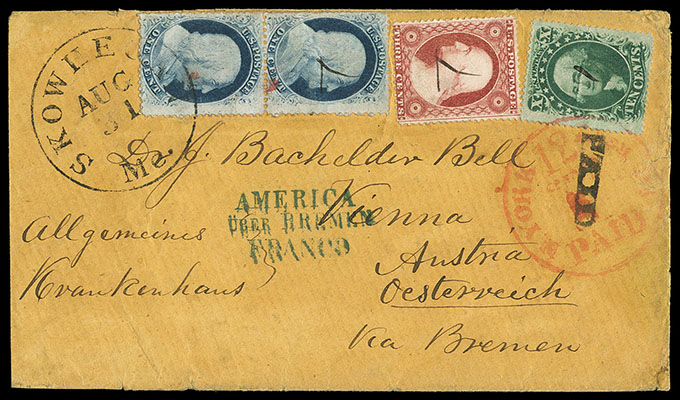 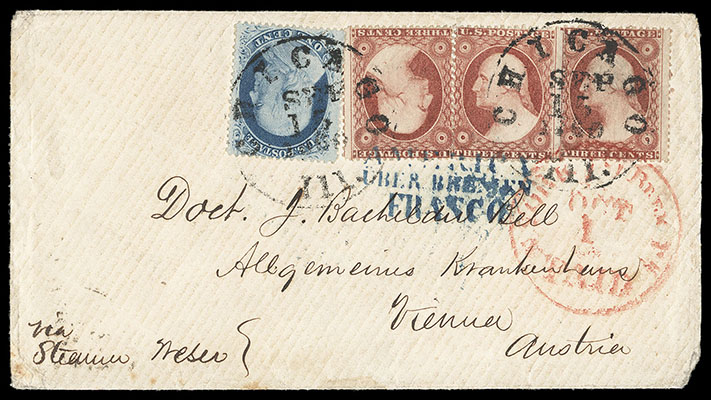 This cover was sent short-paid for the 15¢ Bremen-Hamburg rate, the balance apparently paid in cash as New York rated this as fully paid with a 1¢ credit to Bremen. 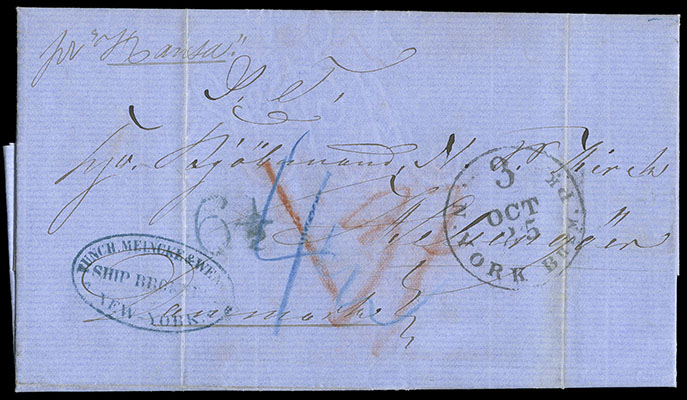 Letter forwarded by New York agent Funch, Meinke & Wendt, whose marking is in blue, lower left. Hamburg marked 4½ sgr. unpaid international fee and 6½ sgr. debit to Royal Danish post office in Hamburg, which was equivalent to 28 sk.R.M. To this was added 9 sk.R.M. for transit from Hamburg to Denmark for total postage due of 37 sk.R.M. 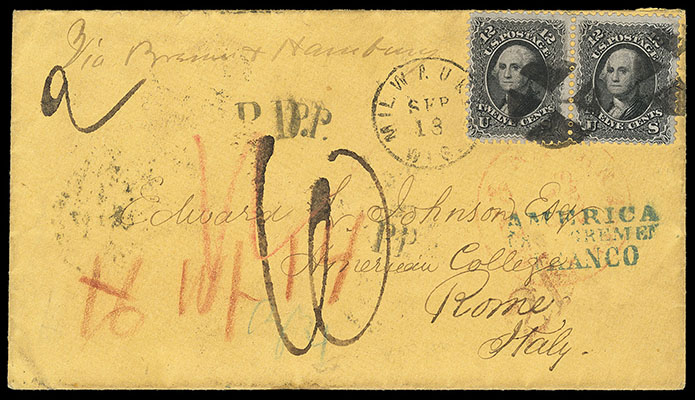 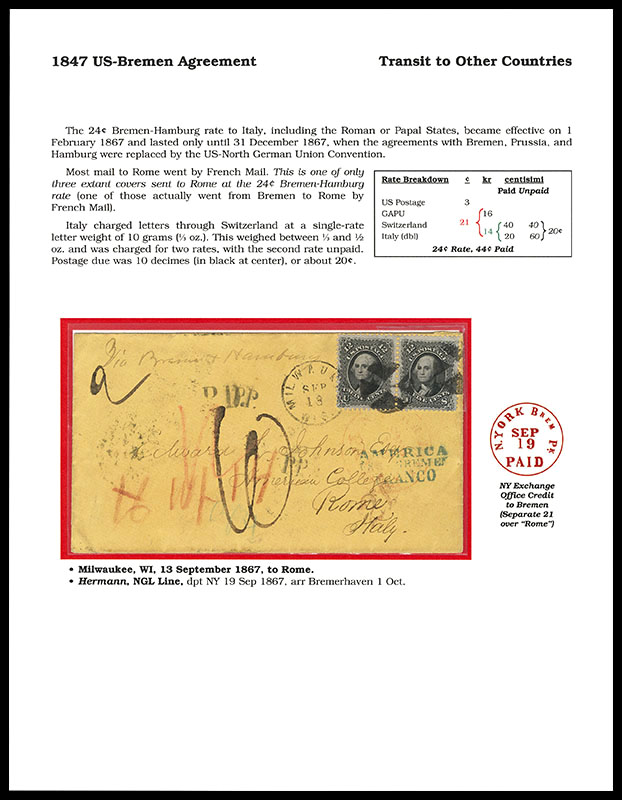 ONE OF ONLY FOUR RECORDED USES PREPAID AT THE 24¢ RATE TO ROME BY BREMEN-HAMBURG MAIL, THIS RATE WAS IN EFFECT FOR ONLY ELEVEN MONTHS.

This remarkable cover was the subject a Chronicle article by George Hargest in August 1972 (No. 75, pp 151-153). In the article, he notes that during this time the Papal States were not yet a part of the Kingdom of Italy. Uprisings, led in part by Garibaldi, had reduced their territory to Rome and a narrow strip of coastline which also contained the port of Civitavecchia. Napoleon III of France sent a contingent to help protect Papal interests. A majority of mail sent during this time was fully prepaid to destination and sent via French Mail. The Bremen-Hamburg route was only in existence from February 1, 1867, until January 1, 1868. It was compulsory that letters sent by this route be prepaid by stamps, with the final postage to destination collected from the recipient. In 1870, at the start of the Franco-Prussian War, the French troops were called home and after a short battle the remaining Papal States territory was incorporated into Italy.

Hargest also quotes from the U.S. Mail and Post Office Assistant for March 1867, which discusses the general state of affairs of the Italian postal system: "But, with all these improvements, the postal system of Italy is still very far behind the English and American systems… Our clerks could hardly, with impunity, fail to find a pile of letters of letters that had been in the office for many weeks, or to destroy others for the sake of making a stamp album. They do so in Italy yet. It is rather desirable to be forewarned that a rare American stamp on a letter will probably ensure its being stopped by the post office. Report says the wives of certain postmasters in Italy have the richest albums in Europe."

Reference: Illustrated and described in an article by Hargest in Chronicle No. 75. 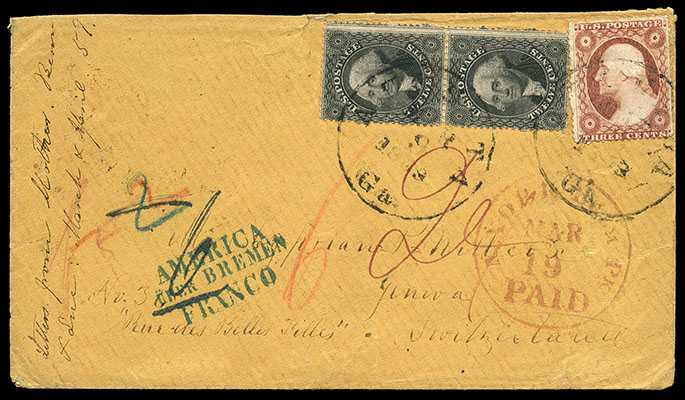 The fully prepaid rate to Switzerland via Bremen was 27¢ from 1857 to 1860. It dropped to 19¢ when Th. & T. eliminated its transit fee. A prepaid letter was charged a flat fee of 4¢ Swiss postage, but the actual cost was based upon distance. 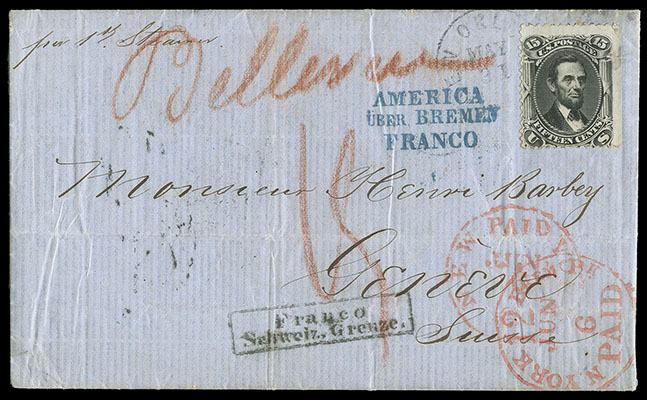