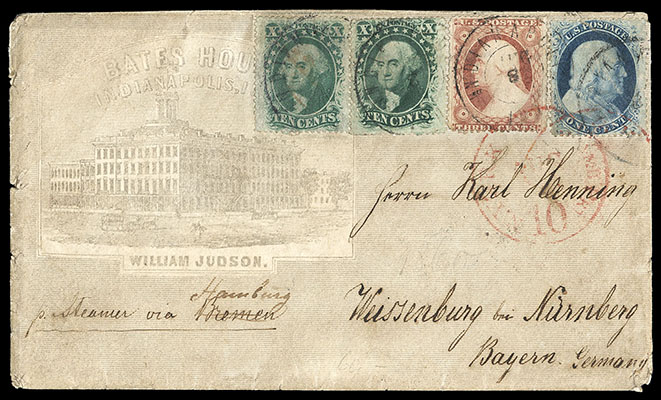 It appears the sender reused the left 10¢ stamp to attempt to pay the "mistaken" 24¢ rate. 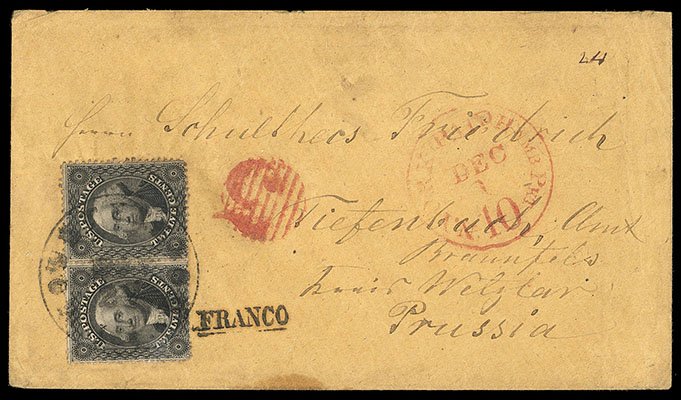 The sender prepaid the cover for the "mistaken" 24¢ rate, which confused the New York exchange office who initially struck the red "3" credit handstamp used on mail at the 24¢ rate to Great Britain.

A SCARCE AND DESIRABLE BLOCK OF EIGHT OF THE 1857 3-CENT TYPE IV USED ON A COVER TO GERMANY.

This exceedingly rare on-cover multiple of the 3¢ type IV is especially desirable because one can clearly see the identifying characteristics of the type, the interrupted framelines between stamps.

Bucks, Ohio accepted this letter as single-rate for 24¢, paid by a rare block of eight 3¢ Type IV. The New York Exchange Office found the letter required two rates (30¢). To avoid treating it as unpaid, New York sent it as "PART PAID" with the full double rate to Hamburg (20¢) and kept the extra 4¢ prepayment.

Rounding among the various currencies was imperfect. Had this letter been fully paid, the GAPU transit share would have been 10¢. It was not, so the GAPU double rate of 12 kr (only 8¢) applied.