Transit via the United States 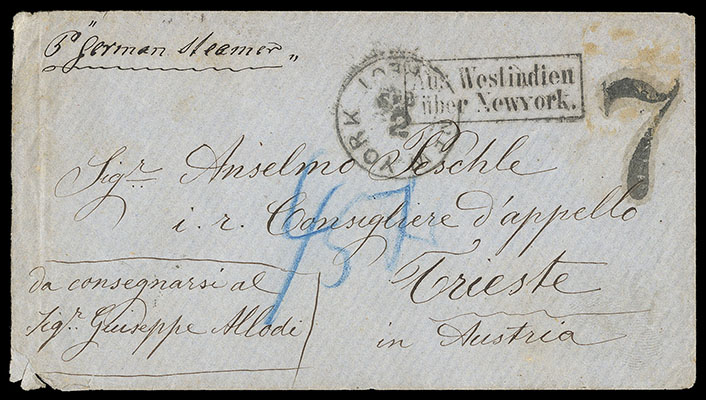 ONE OF ONLY 7 RECORDED EXAMPLES OF THE BREMEN "AUS WESTINDIEN/ÜBER NEWYORK." HANDSTAMP.

The postage due was 4sgr direct mail rate, 2¾sgr US transit and 2sgr unpaid fine for total of 8¾sgr due, or 45 Austrian neukreuzer.

Under the US-NGU Convention, the US charged a transit fee of 7¢ for mail to Germany from Cuba. 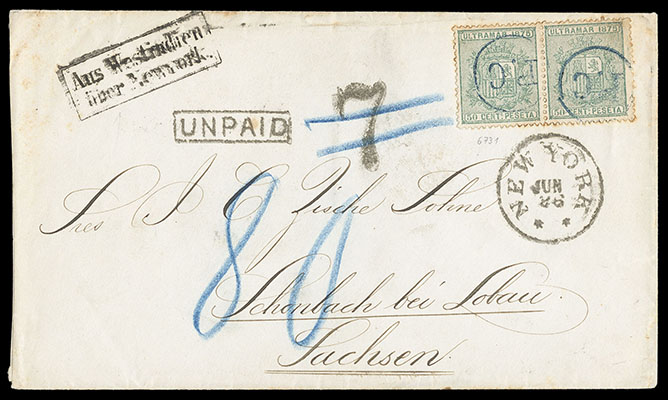 ONE OF ONLY 7 RECORDED EXAMPLES OF THE BREMEN "AUS WESTINDIEN/ÜBER NEWYORK." HANDSTAMP.

Cuba stamps were not recognized since it did not become a member of the U.P.U. until May 1, 1877.

This cover is important because it shows postage due in the 1875 single German currency (1 Mark = 100 pfennings). Since it arrived after the General Postal Union became effective on July 1, 1875, the U.S. transit fee was crossed out. Postage due was 50 pf. Direct Mail rate plus 30 pf US Transit = 80 pfennings (8 sgr in old currency).