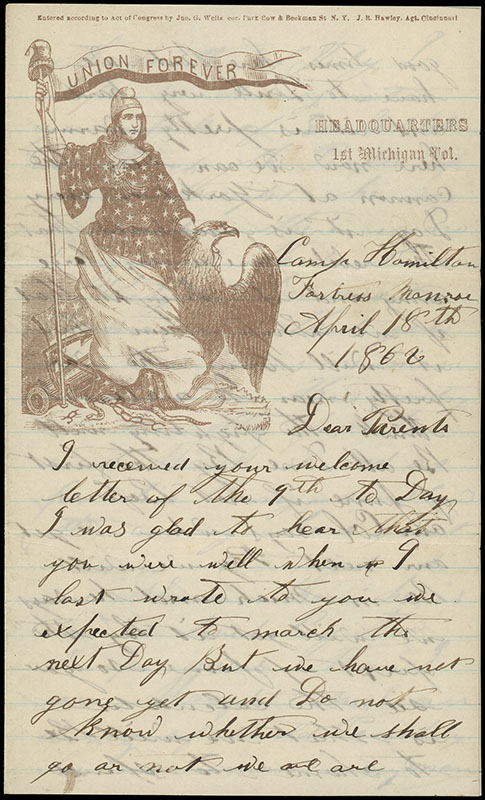 1862 (Mar. 27-Apr. 30) Pvt. William McMurphy, 1st Michigan Vols at Camp Hamilton, Fortress Monroe, Va., group of three letters, first two with faulty 3¢ #65 covers comprising, letter datelined "Camp Hamilton, Fortress Monroe, Va., March 27, 1862" reading "…we are not so close to the enemy as we were for they have retreated back to Bethel and I don't know but for father there is 100,000 men here now and Gen McCellan is here. I had a Pass to go to some other Mich Regts the other day and I came to a Bridge where there was a guard I went up and presented my pass and they would not let me cross when an officer rose up and asked me where I was going I told him to visit Stockton Regt he looked at my pass and told the guard to let me pass, I thanked him and he rose on the guard then told me it was little mac…"; second "Union Forever, Headquarters 1st Michigan Vol." Patriotic Wells imprint letterhead showing Lady Liberty datelined "Camp Hamilton, Fortress Monroe, April 18th 1862" twelve pages reading "…we can hear the cannon at Yorktown every day, it is supposed that the rebels have a very large army and it thought that if we whip them there it will bring the war to a close…you speak of Gen. McClellan as though the People up north thought he was a traitor there is no Danger of that it is a Party of Democratic Secessionists that gets up those yarns…he is loved by his troops more than I ever thought…our Col has been appointed Brig Gen and I think he deserves it as much as any man…he understands the military tactics the best of any Col in these parts…"; and final "U.S. Patent Office" Patriotic lettersheet four-pages datelined "Newport News, April 30th 1862" with excellent military content "…Newport News is not much of a Place there are but few Buildings here except Barracks for soldiers but for a company grounds it is the most beautiful spot once can think of…we are at the month of James river the frigate Cumberland lays sunk by the Merrimac about 80 rods from our camp we can see the rebel gun boats whenever they come and some times they come down here and throw a few shells in here but they don't hurt any body the Merrimac is expected out every day now…I suppose before this reaches you will hear of the Capture of New Orleans and of the forts on the Miss river, the battle of Yorktown still progresses the enemy are not so confident of beating us…", Very Fine patriotic content group.
Estimate    $400 - 600. 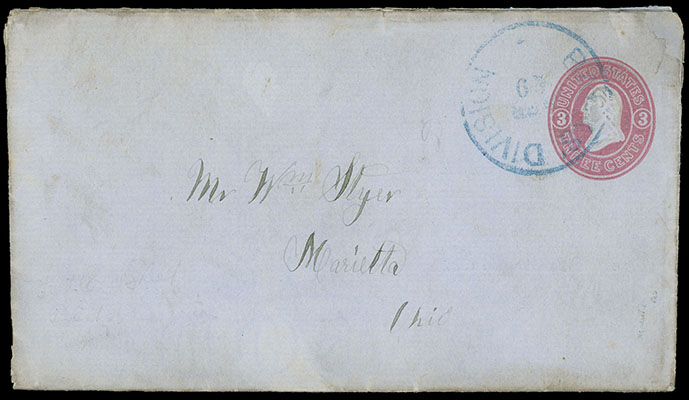 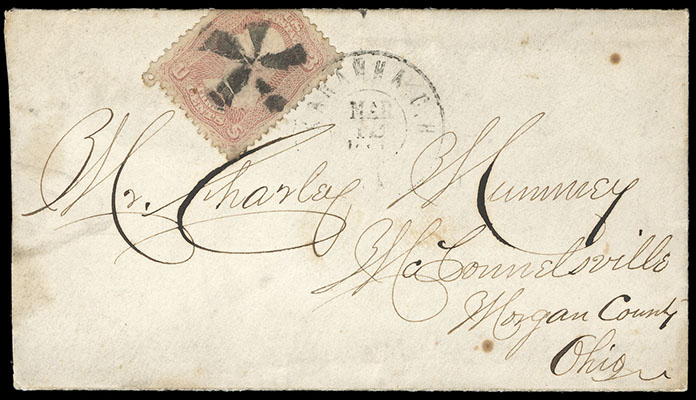 "Camp Toland, Charleston W.V., March 10, 64", datelined enclosed four-page letter from Thomas E. Fischer, Co. E., 2nd Virginia Cavalry with original cover bearing 3¢ rose (65), folded over edge, tied by radial fancy cancel and partial "Kanawha C.H., Mar 14 '64" cds to McConnelsville, Ohio, some interesting war content "…Deserters having been coming in our lines at the rate of 150 to 200 per week. They seem to be greatly disheartened and think their cause utterly hopeless. They all say that many others would desert had they the opportunity. I think when the spring opens so that our grand army can operate effectively it will not be many months ere our Banner will wave triumphantly over Rebeldom and may that glorious hour speedily arrive…Maj. Genl. Seigel commands the Dept., Brig. Genl. Crook the Division, both energetic military men so we may soon expect some work…"; some letter fold separations, F.-V.F.
Estimate    $200 - 300.

The 2nd West Virginia Cavalry Regiment served in the Union Army during the American Civil War. It was organized in Parkersburg, Virginia (now West Virginia) during September 1861. Most of the original members of this regiment were from southeastern Ohio, and planners thought that this regiment would become the 4th Ohio Cavalry. Their application was rejected by the governor of Ohio, so the unit became the 2nd Regiment of Loyal Virginia Volunteer Cavalry. The "Loyal Virginia" part of the name was replaced with "West Virginia" after the state of West Virginia was officially admitted to the Union in 1863. 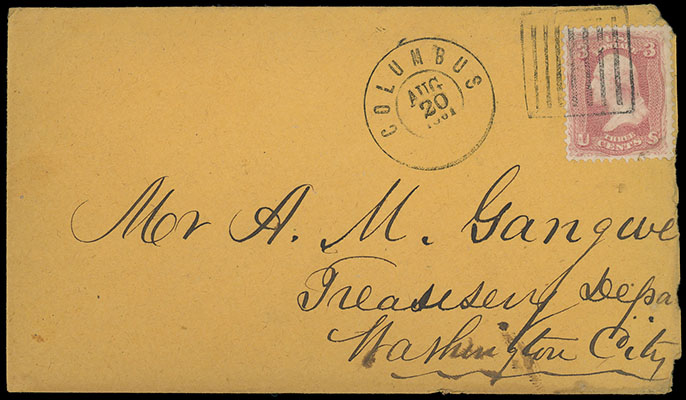 When the first supply of 1861 stamps was received at a post office, postmaster also received instructions to place a notice in local or area newspapers that the new stamps would be exchanged, value for value, for a period of six days. After that, the old (1857 Issue) stamps would no longer be accepted on letters mailed at that post office as valid for postage. 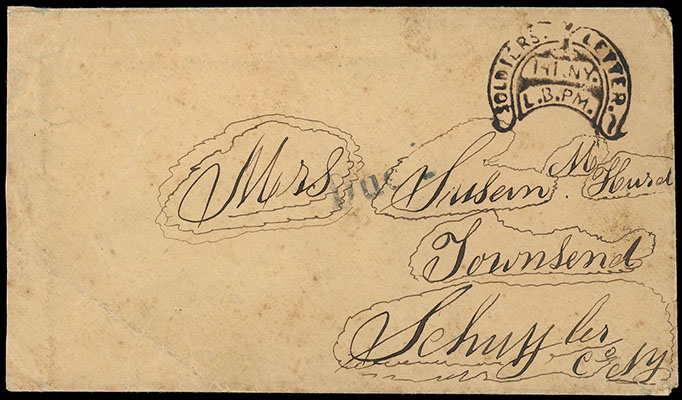 The "P.M." was actually the regimental mail clerk and not a P.O.D. employee. The "Due 3" was applied at Old Point Comfort, probably April or May 1862, while the 141st New York was at Suffolk, Virginia. 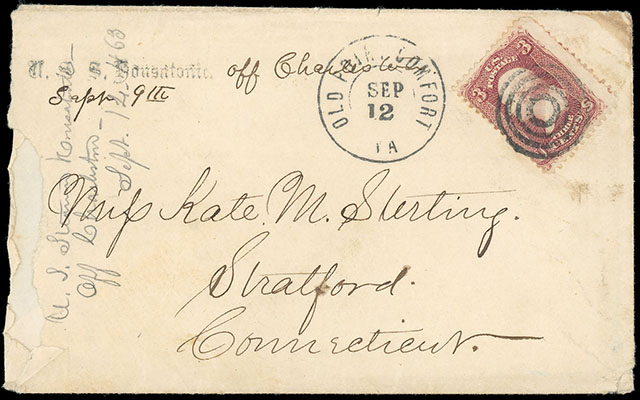 U.S.S. Housatonic, old English imprint handstamp embellished "off Charleston Sept 9th" on cover to Stratford, Conn. bearing 3¢ rose (65) tied by four-ring cancel duplexed with "Old Point Comfort, Va. Sep 12" double-circle postmark to Stratford, Conn.; additional pencil docketing at left, photocopy of original letter datelined "U.S. Str. 'Housatonic' 7th Sepr. 1863, Off Morris Island. Charleston S.C." describing the Battle for Battery Wagner and the Siege of Charleston "…I feel like sending greeting to all loyal hearts to night. Reason enough, too: for Old Sumter is a ruin and the Federal Troops hold the key of Charleston and its harbor. All Morris Island had been abandoned to us. Day after day we anxiously watched our … as it worked nearer and nearer to Wagner which was kept silenced by the iron-clads. Every morning we could see that the serpentine trench was a little nearer the sand fort than the day before. Two or three days ago our ditch was within 50 yards of it. Day before yesterday, the star and stripes were within 30 yards and the Ironsides used her guns all day to keep the sharpshooters in Wagner from firing into the trenches…This morning was the time fixed upon for the final attack. The vessels moved up; so did the army. They marched - the soldiers, over the walls of Wagner without opposition. Wagner had been vacated…" with several pages of further battle information; faulty at left, Fine and scarce cover.
Estimate    $300 - 400.

Later on February 17, 1864, the Confederate submarine "Hunley" sank the blockader, the USS "Housatonic" off Charleston S.C., marking the first wartime sinking of a ship by a submarine. 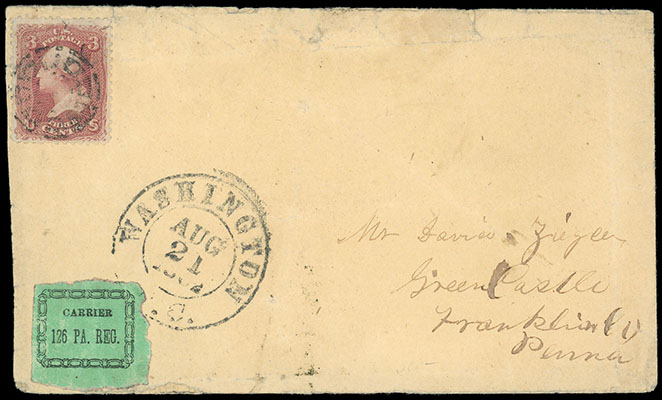 THE ONLY RECORDED TIED EXAMPLE OF THIS EXCEPTIONALLY RARE UNION CARRIER LABEL.

According to Pat Paragraphs, the 126th Pa. Regt. carrier label is known on very few covers, all of which were evidently carried by Col. James G. Edes of Company K, 126th Pennsylvania Regiment, between Washington, D.C., and nearby camps. The 126th Pennsylvania was organized at Harrisburg in Augu st, 1862, departing for Washington on August 15, 1862. They were on duty in the defences of Washington until September 12, when they were transferred to Sharpsburg, Md. They were mustered out in May of 1863.