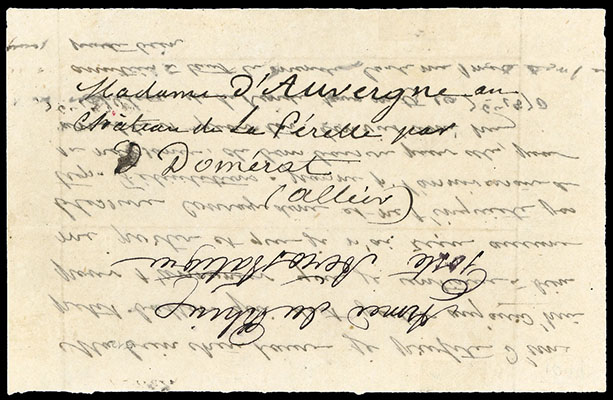 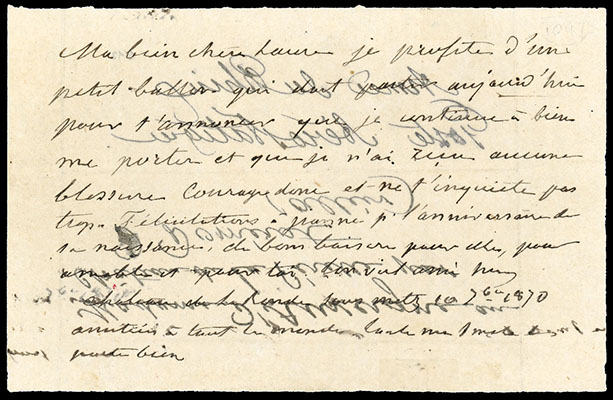 Sent aboard the 8th Pharmacists' balloon which left besieged Metz on September 11 with only 90 papillons and landed near Elmstein, Germany. It was found on November 28 and had a packing slip that read, "Armée du Rhin Poste aérostatique de pharmaciens de la garde imp. Ballon No. 8 Metz 11 7bre 1870, 120 gram 90 de lettres." Since its mail was captured and never delivered, surviving examples show no postmarks. 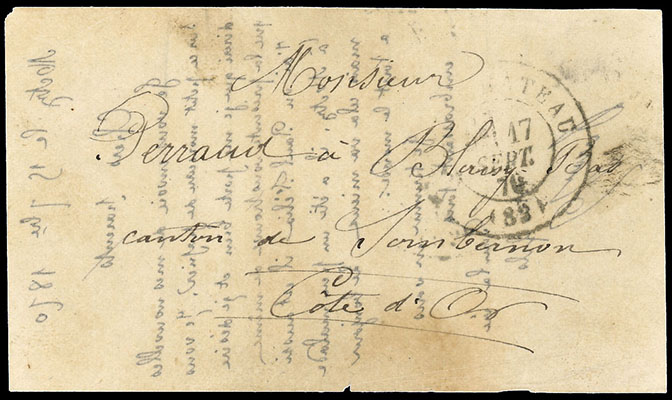 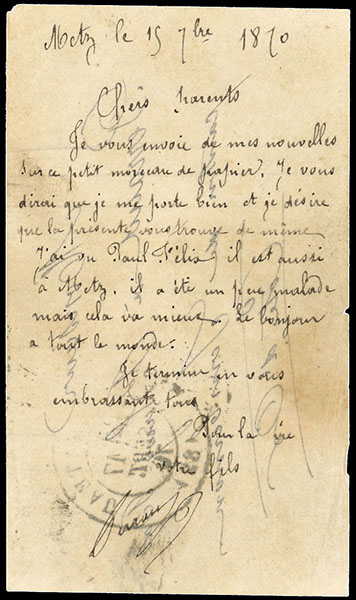 On August 27, Captain Schultz of the artillery and George Robinson, correspondent for the Manchester Guardian, met with Général Coffinières, military commander of Metz, to propose an unmanned balloon service managed by the military garrison of Metz. Coffinières immediately approved the idea and introduced them to Colonel Goulier, commander of the "École d'Application et du Génie," who supervised the construction of the unmanned balloons that would carry messages out of besieged Metz. Because they were constructed at the school of engineering, they are known as Engineers' balloons. A September 14 Order of the Day announced the Engineers' balloon service: "Balloons carrying messages will leave Metz, starting in the morning of 15 September. To permit the dispatching of the greatest number of letters, they must be written on thin paper, 10 x 5 centimeters; they will be sent open and without envelope to the Headquarters of the Commanding General of Metz, to be sent as and when balloons are built." Eleven Engineers' balloons were sent out between September 16 and October 3, with an estimated total of 165,000 papillons carried. A detailed census of surviving Engineers' papillons includes just over 200 survivors, with 40% of those bearing arrival postmarks. Some papillons were sent to their destinations inside of another envelope provided by the post office. These "enveloppes de ré-expédition" are greatly prized by collectors, and only 26 are known today. Finally, only 20 papillons are known addressed to foreign destinations.

The 1st Engineers' balloon left besieged Metz on September 16th with about 5,000 papillons. It was recovered near Neufchâteau later that same day.

In its nacelle was found a package, carefully wrapped and covered with a white rubberized cloth. It was opened, and on a piece of parchment, a statement dated this morning, 16 September, signed by General Coffinières, Commandant of the City of Metz, and sealed with his seal, by means of which this Superior Officer asked the person, in whose hands the package in question would fall, to take it to the nearest French post office. The mayor of Pargny informed of this discovery, hastened to comply with the request of the General, and took the package to the office at Neufchâteau. The Neufchâteau post office postmarked the papillons on September 17. 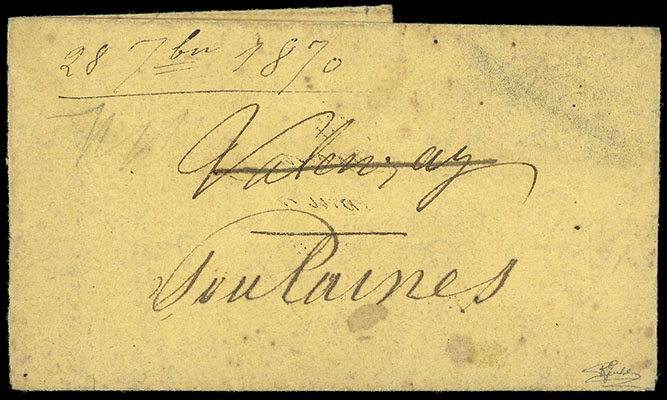 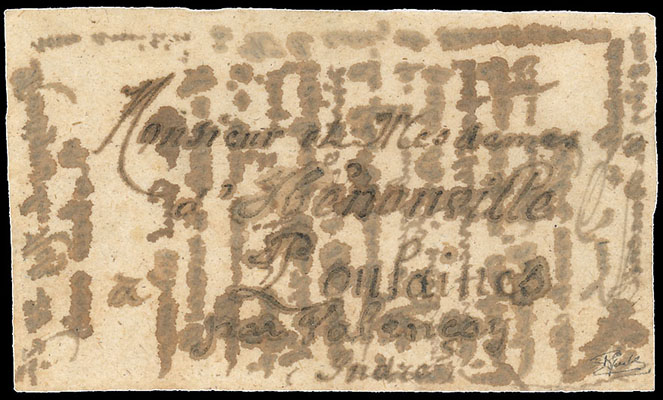 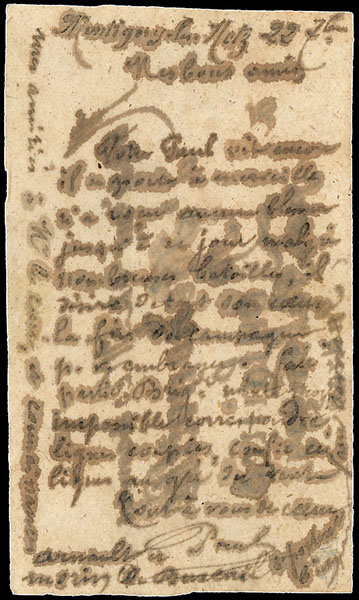 ONE OF THE GREAT RARITIES OF THE PAPILLONS DE METZ PLACED IN ENVELOPE DE RÉ-EXPÉDITION.

Sent aboard the 4th -Engineers' balloon left besieged Metz on September 21st and was recovered safely in occupied France near Fresnes-en-Voëvre with 25,000 papillons.

Some papillons were sent to their destinations inside of another envelope provided by the post office. These "enveloppes de ré-expédition" are greatly prized by collectors, and only 26 are known today.

PAPILLONS ADDRESSED TO FOREIGN COUNTRIES ARE VERY RARE - ONLY THREE ARE KNOWN TO POLAND. 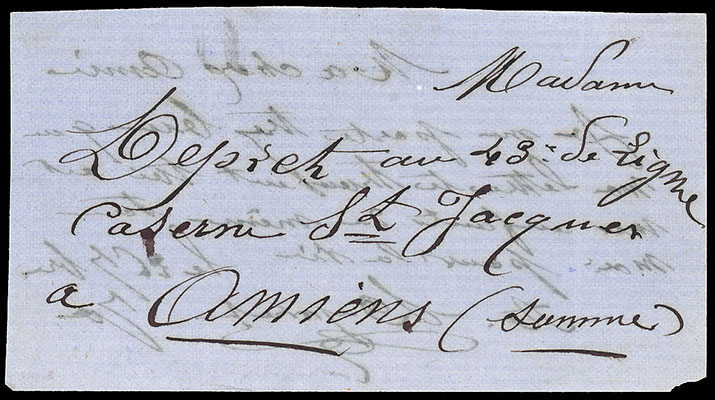 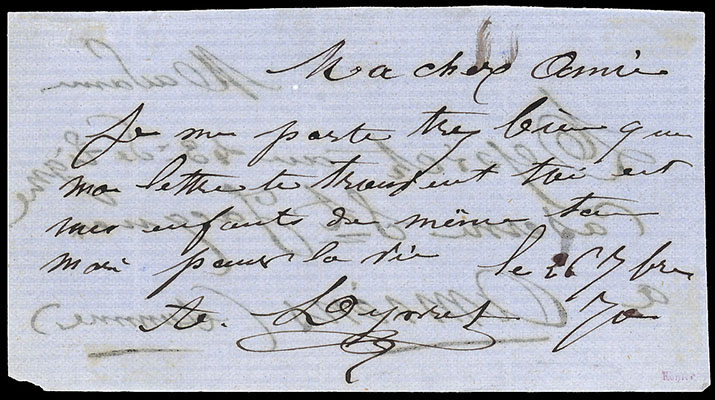 1870 Engineers' Papillon to Amiens, datelined "le 26 7bre 70", probably carried inside of an envelope de ré-expédition; no arrival postmark in Amiens., Very Fine, carried aboard the 8th Engineers' balloon which departed on September 27.
Estimate    $750 - 1,000.

Carried aboard the 8th Engineers' balloon which departed besieged Metz on September 27 and was recovered safely in occupied France with about 15,000 papillons. The papillons were carried across the lines to Mézières on September 28, and then to Lille.

The October 4 Moniteur Universel (Tours) contains a report on this balloon from the Prefect at Mézières (in the north of France) which read as follows:

"A balloon that left Metz on September 27 and carried a suspended package descended the 28th in the area of Bayonville (Ardennes). The package, opened at the office at Buzancy, contained about 15,000 letters of the garrison of Metz and the army of General Bazaine. The postmaster is organizing a service to have these letters sent to the addressees." .