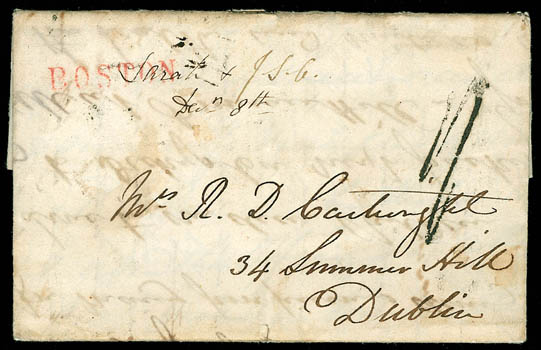 When Britain introduced its West India service with a branch line to the US in 1842 it also tried to establish consular offices in Boston, Charleston, Mobile, New Orleans, and New York. The American Postmaster General became aware of the breach of Sovereignty and by early 1844 had these offices closed.

The office at Boston is recorded as using a straight line "BOSTON" handstamp from 2nd December 1842. 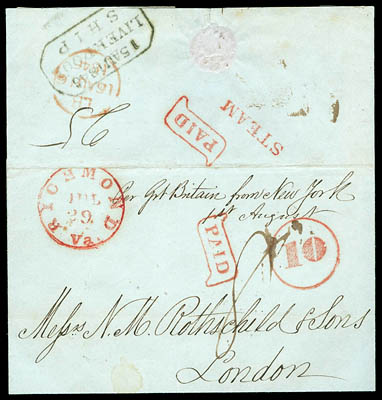 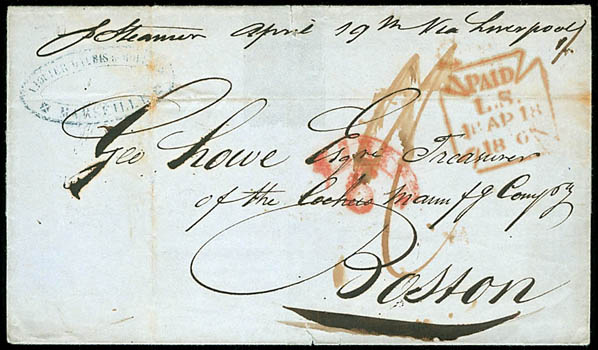 On the "Cambria?s" 8th crossing to Boston leaving Liverpool on April 19th 1846 the 1,432 gross ton vessel was accidentally beached at Truro, Cape Cod on May 2nd 1846. The mails were landed and taken by an ox team drawn wagon to Plymouth to be put on rail cars for Boston. 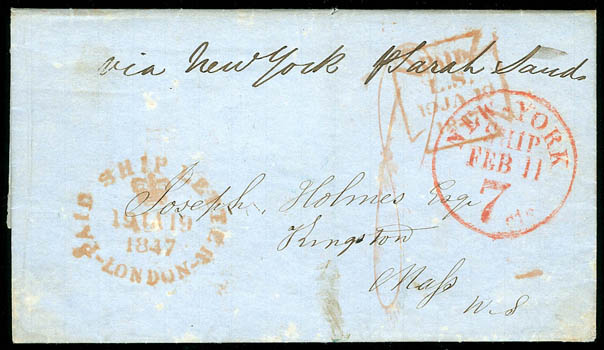 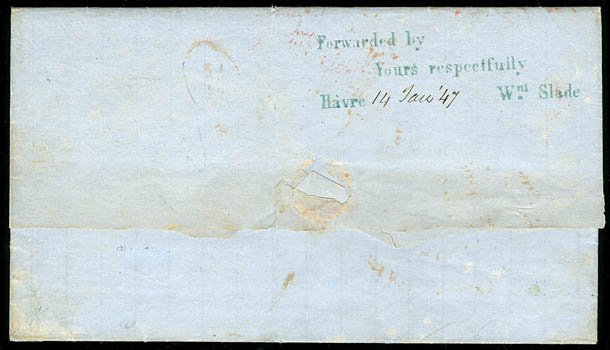 Steamship "Sarah Sands" Maiden Voyage. Entire date "Havre January 13th 1847" with blue William Slade/Havre forwarding cachet on reverse, manuscript "8"(d) paid at London as a Paid Ship Letter on January 19th, sent to Liverpool as endorsed "via New York per Sarah Sands", on arrival at New York struck with the "New York/Ship/7 cts" cds in red for the 2¢ ship fee & 5¢ inland postage to Massachusetts, Very Fine, One of only three recorded letters carried on the maiden voyage of the "Sarah Sands".
Estimate    $1,000 - 1,500.

The "Sarah Sands" of 1,400 tons was built for Sands & Company of Liverpool by James Hudson & Company, also of Liverpool as an iron screw propelled vessel and launched in September 1846. The maiden voyage from Liverpool to New York left on the 20th January 1847 and the Prices Current shown below traveled on that voyage. 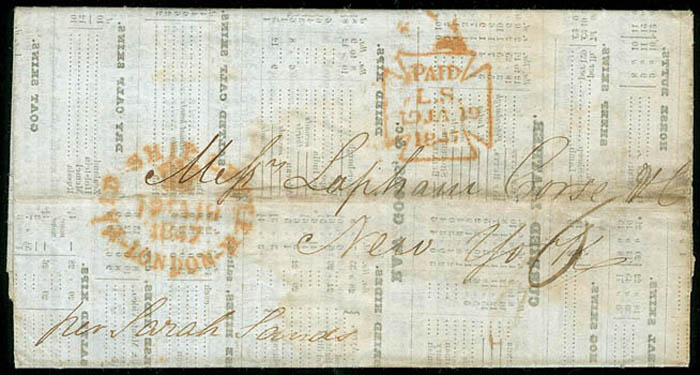 Steamship "Sarah Sands" Maiden Voyage. Annual Prices Current of the leather and hide factors Thomas, James & Thomas Powell dated "London 6th January, 1847" and addressed to New York and put into the post at London on 19th January 1847. Sent as a paid ship letter and endorsed "per Sarah Sands" to arrive at Liverpool for that ships sailing on the 20th January. On arrival at New York manuscript endorsed "6" being the fee for a ship letter delivered at the port of arrival; light staining, otherwise Very Fine, One of only three recorded letters carried on the maiden voyage of the "Sarah Sands".
Estimate    $500 - 750.

Although Sands & Company built her for the Atlantic trade she proved too slow and was sold to the Pacific Mail Steam Ship Company in 1850 arriving San Francisco 5th June. Sold on in July 1851 for service to Australia and sank near Bombay in 1858. 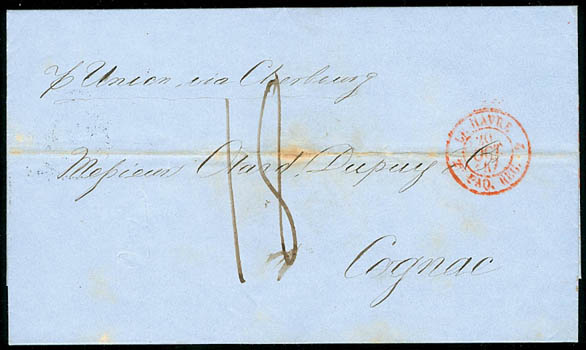 Hérout & de Handel Lines "Union" Last Completed Voyage, New York - Cherbourg, 30th September - 18th October 1847. Entire headlined "New York 30 Sept 1847" endorsed "p Union via Cherbourg" and addressed to Cognac. The exchange office appears to have been at Havre for all the Cherbourg arrivals and the letter bears the Havre arrival stamp of the 20th October, two days after the Union docked at Cherbourg. Charged 18 decimes on arrival at Cognac on the 22nd October. The Union embarked from Havre on its third and final voyage on the 24th November 1847 but sustained severe storm damage and returned to Cherbourg on the 1st December; light toning along file fold, otherwise Very Fine.
Estimate    $400 - 600. 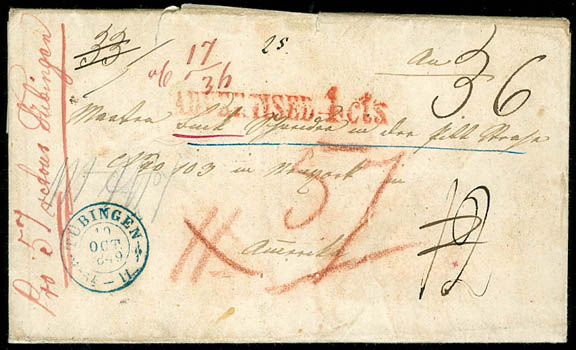 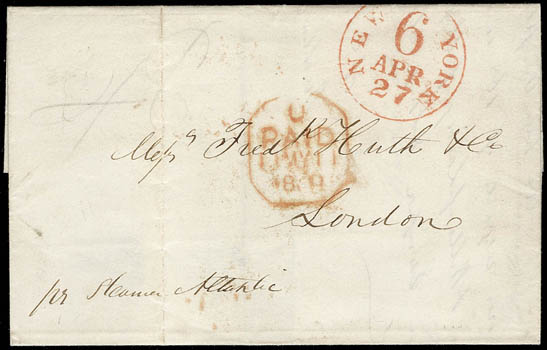 Edward K. Collins was awarded a 10 year contract by the Secretary of the US Navy under the Foreign Mails Act of 1845. The first steamship to carry mails under the contract was the Atlantic leaving New York April 27th 1850. 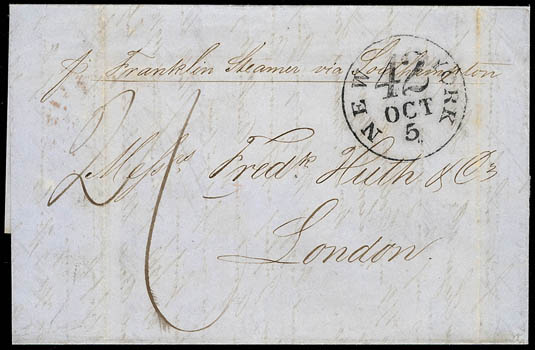 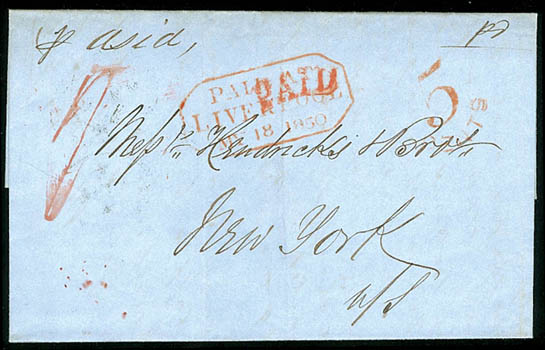